Republicans face backlash from their own party for supporting infrastructure bill

President Joe Biden is set to host a White House ceremony to sign the $1.2 trillion bipartisan infrastructure bill into law on Monday, a commemoration which is slated to include both Democratic and Republican lawmakers, mayors, governors, labor union and business leaders.

The White House has not yet released the list of who will be attending the ceremony, but it begs one key question: Despite the bipartisan nature of the bill, what Republicans are actually going to attend the ceremony?

At least one prominent Republican, Minority Leader Mitch McConnell, has already said that he won’t be going.

“No, I've got other things I've got to do other than go to the signing ceremony,” the Republican leader told Kentucky radio station WHAS in an interview.

McConnell went on to say that the bill — which received 19 Republican votes in the Senate and 13 in the House —  is “good for the country and I’m glad it passed.”

“This bill was basically written in the Senate by a bipartisan group of Republicans and Democrats,” he said, referring to the group of 10 lawmakers who negotiated the agreement on the bill, led by Sens. Rob Portman, R-Ohio, and Kyrsten Sinema, D-Ariz.

McConnell also called the bill a “godsend for Kentucky” this week during a visit to an AppHarvest facility in Morehead.

One prominent Republican disagreed with McConnell’s assertion: Former President Donald Trump, who questioned McConnell’s support of the bill in a statement.

“Why is it that Old Crow Mitch McConnell voted for a terrible Democrat Socialist Infrastructure Plan, and induced others in his Party to do likewise, when he was incapable of getting a great Infrastructure Plan wanting to be put forward by me and the Republican Party?” the 45th president wrote.

Trump's comments are indicative of the incredibly divisive rhetoric surrounding what is, by all accounts, an issue with widespread bipartisan support.

But much has changed in Washington since that group of lawmakers stood outside the White House with President Biden in June and announced that “we have a deal” on the more than $1 trillion measure, which will provide funding for roads, bridges, electric vehicle charging stations, ports, trains and other public works projects. 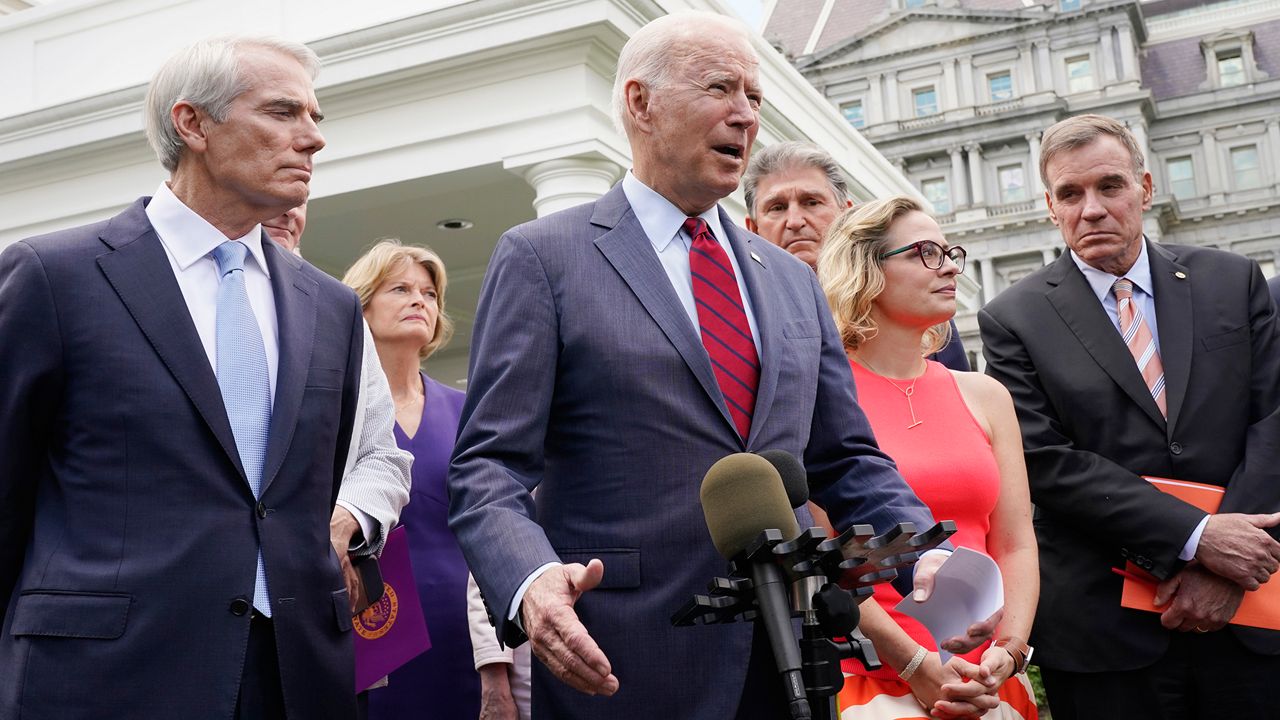 Partisan divisions in Washington have only grown deeper. The United States’ chaotic withdrawal from Afghanistan drew condemnation on both sides of the aisle. The House panel’s investigation of the Jan. 6 riot at the U.S. Capitol continues in earnest. And Republican wins in the off-year elections earlier this month have fueled hopes that the party can build on that success in its efforts to retake one or both chambers of Congress next year.

But those in the party who supported Biden’s bill are now facing severe backlash for their positive votes.

One prominent Republican, Sen. Lindsey Graham — who just this week said that his friendship with Biden has been irreparably damaged by the withdrawal from Afghanistan — was censured by the Dorchester County Republican Party in South Carolina for his support of the infrastructure bill.

“Senator Graham’s votes to support the Infrastructure Bill violate the SCGOP platform and the trust of those who sent him to Congress to exercise fiscal restraint and advocate conservative principles,” the party said, alleging that the infrastructure bill does “nothing to secure our borders, while the remainder is dedicated to progressive agenda goals like electric cars, buses, and charging stations, subways, western water storage, environmental cleanup, [and] broadband for low-income communities, rewarding Democratic constituencies.”

The vote took place last month, according to the Charleston Post and Courier, but was made public on Wednesday. This follows a similar such move by the York County (South Carolina) Republican Party in August, which claimed that “Senator Graham has turned his back on the Republican Party Platform, those who worked to get him elected, and has put America’s interest’s second to China, and the rise of Marxism in the United States.”

Though Graham is hardly in danger of losing his seat in the Senate — he cruised to re-election in 2020 — he is just one of the Republicans facing backlash in his own party for supporting the measure championed by President Biden and Congressional Democrats.

The recent vitriol is being specifically aimed at the 13 Republican members of the House who supported the infrastructure bill.

“I regret that this good, bipartisan bill became a political football in recent weeks,” Michigan Rep. Fred Upton, one of those 13 House GOP lawmakers, wrote on Twitter. “Our country can’t afford this partisan dysfunction any longer.”

I regret that this good, bipartisan bill became a political football in recent weeks. Our country can’t afford this partisan dysfunction any longer. #MI06 #Infrastructure

Upton shared with CNN this week a threatening voicemail in which a caller referred to him a “f****** piece of s*** traitor,” adding: “I hope you die. I hope everybody in your f****** family dies.”

"This madness has to stop," Upton said, adding that his office has received dozens of threatening calls following the vote.

The Hill reports that those calls may have come after freshman Georgia Rep. Marjorie Taylor Greene, a staunch Trump ally, shared on Twitter the names and phone numbers of the 13 lawmakers who voted for the bill. Greene also branded them “traitors.” (POLITICO reported that one Republicans' offices had all the calls rerouted to Greene’s office following her action.)

North Carolina GOP Rep. Madison Cawthorn also vowed retribution against the lawmakers: “Vote for this infrastructure bill and I will primary the hell out of you.”

In an interview, Rep. Andy Biggs, R-Ariz., the leader of the conservative House Freedom Caucus, said that the party should consider removing those 13 members from their committee leadership positions: "I respect their right to vote their districts and their conscience. But that doesn’t mean that they should get the privilege of leading."

Florida Rep. Matt Gaetz took aim at New York GOP Rep. John Katko, singling him out for voting to impeach Trump, voting to form a bipartisan panel to investigate the Jan. 6 Capitol riot, voting to remove Greene from committee assignments, voting to hold Trump ally Steve Bannon in contempt of Congress for defying a subpoena from the panel investigating Jan. 6 and the infrastructure bill.

Katko “voted against us on all of them,” Gaetz wrote on Twitter. “He is the GOP lead on the Homeland Security Committee, with support from ‘Leadership.’”

Four of those 13 lawmakers were among those who joined Democrats in voting to impeach former President Donald Trump for inciting the Jan. 6 riot at the U.S. Capitol earlier this year. Two of them — Reps. Anthony Gonzalez of Ohio and Adam Kinzinger of Illinois — have announced that they are not running for re-election in 2022.

Meanwhile, police on Long Island said that a New York man was arrested and charged for making a death threat against GOP Rep. Andrew Garbarino, who represents parts of Nassau and Suffolk County on the island's south shore. Garbarino was one of the 13 GOP lawmakers who voted for the infrastructure bill.

Garbarino told the New York Post that "misinformation" from conservative pundits and some of his fellow Republicans have put some lawmakers' safety at risk.

"There are members of Congress that are fundraising off of their misinformation and attacking us, and it’s causing us to get death threats on the other side," he told the outlet.

GOP Rep. Don Bacon also told the Post that he has been inundated with phone calls, but the misinformation with those is also rampant – the Nebraska Republican says that callers are confusing the infrastructure bill with parts of the $1.85 trillion Build Back Better bill, which Democrats aim to pass soon via the reconciliation process.

Infrastructure was a major priority of the Trump administration, an issue which has widespread bipartisan support, but the former president could not get a deal together in his four years in the Oval Office.

“To only get 13 votes from the House was very sad,” Rep. Peter DeFazio, D-Ore., who chairs the Transportation and Infrastructure Committee, told the New York Times. “But to have those people attacked for doing the right thing for the United States of America and everybody’s constituents?”

"It’s a sad statement of how the other party has lost its way," Rep. Sean Patrick Maloney, the chair of the Democratic Congressional Campaign Committee, told The Associated Press. "If you want our country to fail so you can say things are bad and win power for yourself, you act like the House Republicans are."

Even some Republicans who opposed the bill have pushed back on the blowback their colleagues are receiving.

"This notion that we’re going to have people that are on the fringe, in terms of the Marjorie Taylor Greenes of the world and others, imposing some kind of a purity test on substance is lunacy," Rep. Liz Cheney, R-Wyo., vice chair of the panel investigating the Jan. 6 riot, said.

Cheney, who has been at war with much of her party this year over her outspoken opposition to Trump, said that the 13 House GOPers who backed the bill are "among some of our very best members" because they did "the right thing for their districts."

New Jersey GOP Rep. Jeff Van Drew, who was elected as a Democrat in 2018 but changed parties, said he supported the bill because his state would receive over $20 billion “we desperately need.”

“If Marjorie Taylor Greene wants to be mean to me, that’s fine,” he added. “I love America very much. I would never ever do anything to hurt this country.”