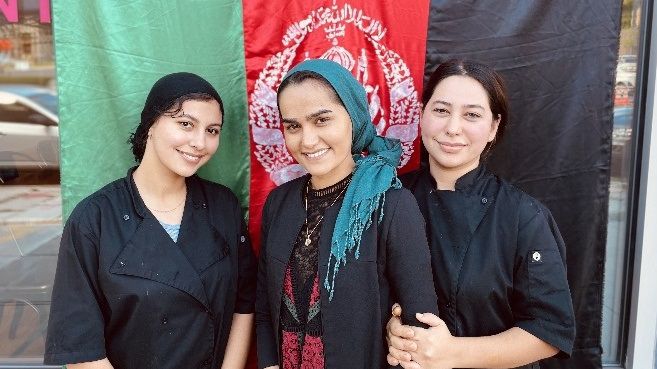 The situation in Afghanistan continues to decline since the American military left the region in August. In Central New York, Afghanistan refugees are continuing to work to help support their family, friends and strangers that are still stuck in the war zone.

Three sisters have cooked up a way to raise money to send to help those in Afghanistan.

“If I was in Afghanistan right now, I would have been either married to somebody and have kids already,” said Raheleh Tajik, founder of Afghanistan Crisis Fundraisers.

These three Afghan sisters, Tamana, Soniiya and Raheleh, watch the news and continue to get calls asking for help from people struggling overseas.

“I just feel the fear in those women who are in Afghanistan, and they do not have powers," said Raheleh Tajik.

Each month, they’re preparing Afghan meals to host their own Afghanistan Crisis Fundraisers in Syracuse.

“We’re are helping those people that are in need," said Raheleh Tajik.

The Tajik sisters have been in America for about five years. They attend local colleges, in addition to the 400 meals they make each month.

"We have chicken biryani, and we have burani, which is the eggplant with tomatoes, and I'm chopping the onions. We also have shole-zard, which is the dessert. Can you see the saffron? Yes, sugar, a lot of sugar, and rosewater makes it so smell good,” said Raheleh Tajik.

The sisters' shared experience drives their collaboration to help their homeland.

"I was a refugee since I was not even born," said Tamana Tajik. She is an Afghan that was born in Pakistan when her family fled their home country.

Despite the sisters now living in America, they are far from removed from the pain in the Middle East. They share their father was killed in Afghanistan earlier this year.

“He was attacked by Taliban in April of this year. So I feel them. I know my dad made a lot of connections. When he was there, when he was alive and we were talking over the phone. So I've already known what they are going through. And people over here don't know what people are going through in Afghanistan. So I said, well, maybe this will help people, knowing Afghan people and knowing what's going on in Afghanistan and be a support for them, be their voice. All I hope for everyone everywhere is peace. Being at peace is my hope," said Tamana Tajik.

In addition to the monthly fundraiser of cooking meals to raise money, the sisters planned a clothing drive for refugees now arriving to Central New York weekly.

The clothing drive began Oct. 22 and will run through Nov. 6 from 9 a.m. to 5 p.m. at Le Moyne College. They specifically need winter coats for adults and children. Toy donations are also welcome. Most families are fleeing their homes with almost nothing.

If you have items you would like to donate or to see their next meals to-go fundraisers, you can visit the sisters' website.