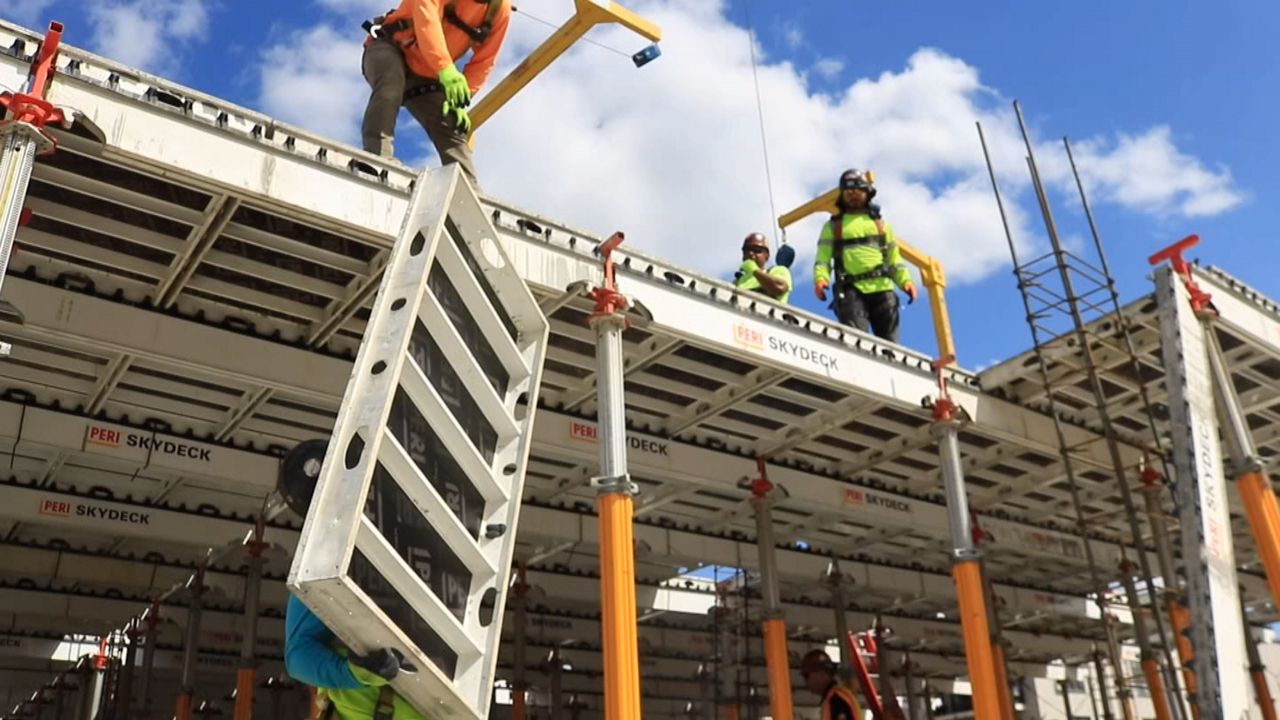 Construction industry struggles to bounce back from pandemic

As New York fully reopens after more than a year of COVID-19 restrictions, the state is slowly climbing its way out of an economic hole. But for the construction industry and its associated trades, that climb maybe a little harder.

Although construction was deemed essential work early in the pandemic, the industry has seen a steep decline in employment.

“Over the past year, since May of 2020 until now, non-residential construction employment has kind of bumped along, and the industry as a whole is still down over 250,000 jobs,” said Ken Simonson, chief economist for Associated General Contractors of America (AGC).

A report released by state Comptroller Tom DiNapoli in early June states that New York, as a whole, has lost more than 44,000 construction jobs during the pandemic, which is the sharpest decline for the industry in 25 years.

“Ours is an industry that, pre-pandemic, had workforce shortages, not just in New York, but really across the country," AGC New York State Chapter President and CEO Mike Elmendorf said. "Post-pandemic, we have workforce shortages. So, it's sort of hard to wrap your head around the fact that you had that many job losses, yet you still have contractors that are having trouble finding workforce."

New York's unemployment rate statewide fell to 8.2% from 8.4% between March and April, but continues to lag behind the national average.

New York has recorded overall the highest construction job loss of any state in the country during the last year. But with investment in infrastructure from the state and federal government, trade professionals are hopeful that the industry will be able to bounce back.

“We hope that the pandemic is behind us," Elmendorf said. "People are back to work, we are starting to see some very encouraging signs out there. You know, at the state level, you've got historic levels of investment in infrastructure of really all types in the state budget."

Employment problems are not the only issue the construction industry is facing. Contractors are also dealing with a shortage of materials and skyrocketing prices.

“Construction contractors are continuing to lose money because of this jump in materials costs," Simonson said. "Materials costs have gone up 24% over the last year, while bid prices for new construction work have only risen about 2.8%.”

Although there are some hurdles to overcome, there is hope that the industry will recover and grow.

“We think there are encouraging signs out there for recovery, generally, and this is an industry that's poised to help drive recovery," Elmendorf said. "And we hope that's going to mean job recovery for the construction industry, and not only getting back those construction jobs that were lost, but growing, growing beyond that."

Members of AGC are hopeful the proposed infrastructure bill in Congress will pass and be signed by President Joe Biden, giving the industry an influx of billions of dollars for needed upgrades to key infrastructure.

Congress is currently out of session, but when they return in September, it is expected that lawmakers in Washington will get a bipartisan infrastructure bill on the president’s desk.

There are two competing bills up for debate, one only dealing with the usual infrastructure, like roads bridges and rail. The second expands on that, including other programs like child care, social services and education.

There is hope that one of these bills will pass when Congress returns.