Biden lays out vision for domestic production of electric vehicles: ‘We have to move fast’

President Joe Biden traveled to Michigan for a tour of the Ford Rouge Electric Vehicle Center, visiting a day before Ford is expected to release details of an all-electric version of its F-150 pickup truck called the Lightning.

Biden, a self-proclaimed car enthusiast (""My name is Joe Biden and I am a car guy," the president said), got a sneak-preview of the new Ford vehicle during his tour.

“I know the Secret Service may not let you drive yourself, but if you can win them over, you're always welcome to take the F-150 Lighting for a spin, and I promise you, it’s going to give your Corvette a run for its money,” William “Bill” Ford, Jr., executive chairman of the Ford Motor Company joked.

(Biden did later take the F-150 Lightning through an empty lot after his remarks, telling reporters, "This sucker's fast.") 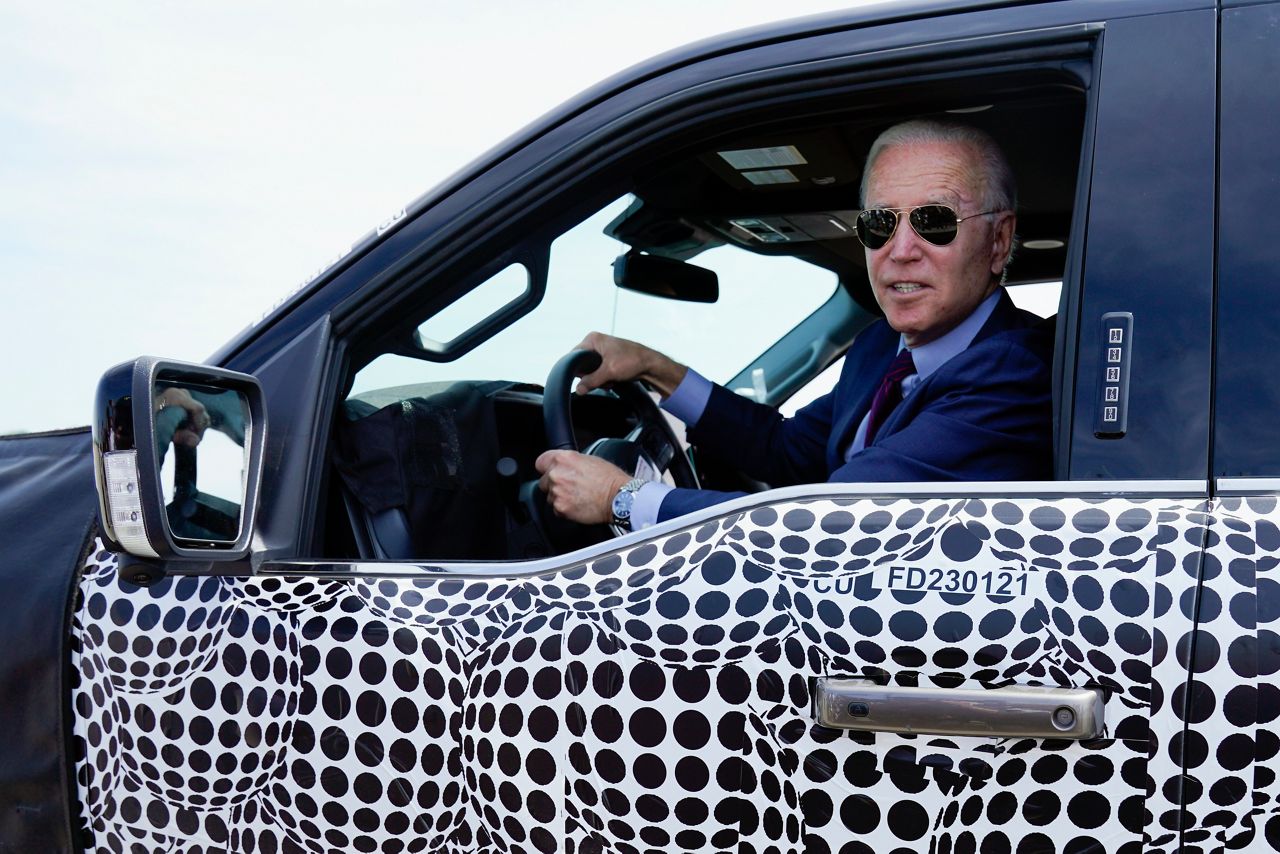 President Joe Biden stops to talk to the media as he drives a Ford F-150 Lightning truck at Ford Dearborn Development Center, Tuesday, May 18, 2021, in Dearborn, Mich. (AP Photo/Evan Vucci)

The president used his visit to spotlight the electric vehicle future he envisions for the United States, emphasizing the role such vehicles will play in tackling climate change and creating jobs.

Biden stressed that the improvements to U.S. infrastructure — including the manufacturing of electric vehicles — are paramount if the country wants to compete with China on a global scale.

“Right now, China is leading in this race. Make no bones about it, it's a fact,” the president said of the auto industry, later adding: “They think they're gonna win. But I got news for them, they will not win this race. We can’t let them. We have to move fast, and that’s what we're doing here.”

Biden has proposed a $2.3 trillion infrastructure plan that aims to help transform the automotive sector by making vehicles that don’t burn gasoline more mainstream. He also sees a shift toward electric vehicles as a major part of his plan to fight climate change.

Part of Biden’s plan is to boost domestic manufacturing of large parts used in electric vehicles, like the batteries he was shown during his tour of the Ford center.

He also has to overcome a major hurdle before his electric vehicle zero emission future becomes reality: the lack of stations where people can plug in and juice up their engines.

Biden said the U.S. has just a fraction, about one-third, of the electric vehicle market share that China has, and far fewer public charging points — and needs to catch up before it can take the lead.

To that end, Biden has proposed $174 billion for electric vehicles. That money includes rebates and incentives for consumer purchases, along with money to build 500,000 charging stations by 2030.

"The future of the auto industry is electric. There's no turning back," Biden said Tuesday. "The real question is whether we'll lead or we'll fall behind in the race for the future, or whether we will build these vehicles and the batteries that go in them here in the United States or rely on other countries.”

Last week, a group of Republican senators met with Biden and they are to return this week with a counteroffer. There are some hopes for bipartisan agreement on hard infrastructure — like highways and broadband — before Democrats push forward their family plan on a party-line vote. At minimum, aides have said, they want to make a show of reaching across the aisle to reassure moderate Democrats leery of pushing through massive spending bills using a legislative strategy that bypasses Republicans entirely.