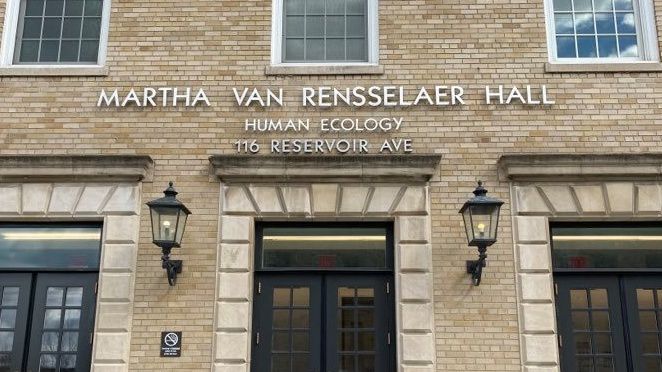 Constructing a legacy; the Martha Van Rensselaer building on Cornell’s campus houses the College of Human Ecology, but it has roots in women’s history. The renovators fused past and present in the design.

Walking through Martha Van Rensselaer Hall at Cornell might feel like your typical academic building. But it has ties to two powerful women. Van Rensselaer and Flora Rose started the School of Home Economics in 1933 and they were two of the first females tenured at the Ivy.

“They were really involved in the women’s rights movement of their time they were connected with Eleanor Roosevelt and others, other women’s rights activists in the area," said Rachel Dunifon, Cornell College of Human Ecology Dean.

The founding of the college was a big step for women, it was the beginning of normalizing women in academia.

“Back in the original days of Cornell’s founding, it wasn’t necessarily considered socially acceptable for women to study many other fields, but the field of home economics was a way in which women could get a strong scientific education that they could apply directly to their lives," said Dunifon.

Recognizing that history was important to the women who worked on the renovation of the space.

“A building is a lot more than just the walls and the floor it actually influences us and so we wanted to be really intentional about those spaces," said Dunifon.

From fixtures to crown molding, every detail was planned to reflect the college, the time period it was founded, and the founders’ vision. They were even able to keep some of the original flooring from 1933.

“At the same time we have the glass doors, the clean lines, the openness, this beautiful chandelier to show that it’s a modern building as well and contemporary," said Dunifon.

“Kinda deemphasizing the elevator, encouraging opportunities for people to keep moving during the day, and create incidental opportunities to bump into each other," said Kristine Mahoney, Cornell College of Human Ecology Director of Facilities and Operations, on the building's open staircases.

“They had something called farm and home days so every year Eleanor Roosevelt came down to visit, and participate in sort of showcasing the knowledge of the college and how it applies to families in New York State," said Dunifon.

The last stage of renovations is finally complete, after almost 20 years of working to get the building to its current finished state.

Over the years the building has changed, but the college has continued to inspire, and education generations of women and will continue for generations to come. The College of Human Ecology will be celebrating its 100th anniversary in 2025.