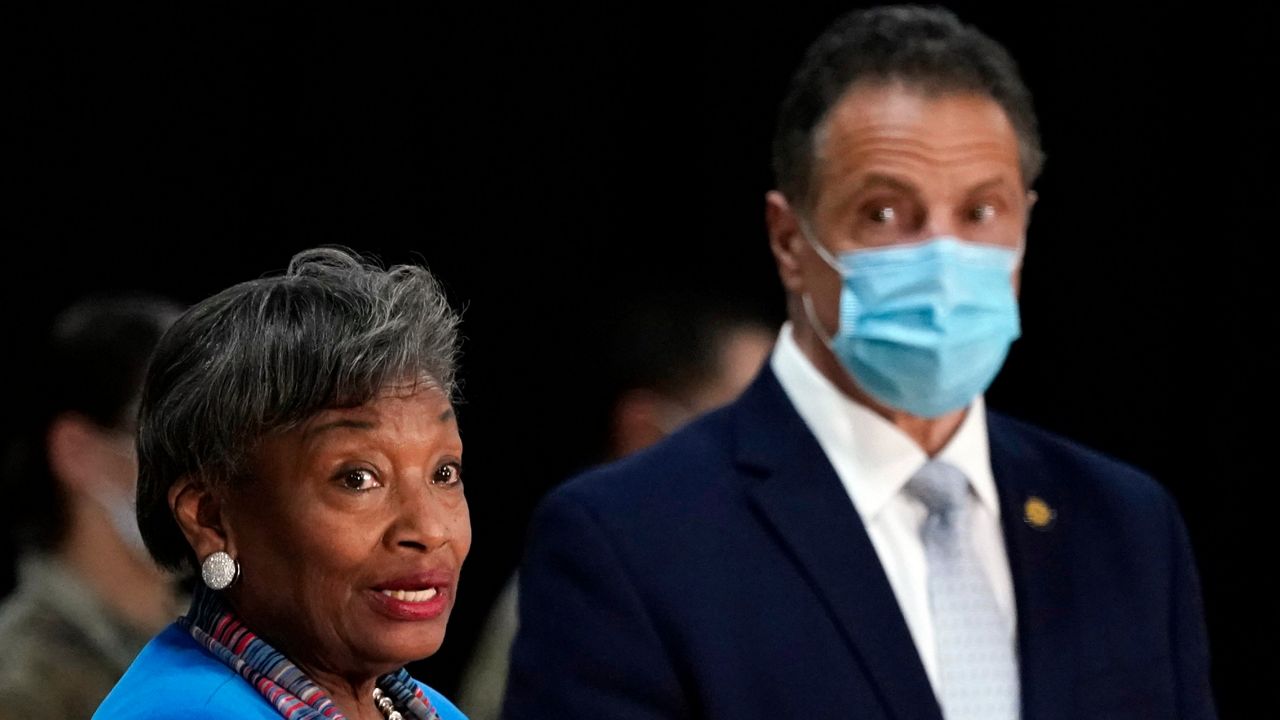 Senate majority leader appears alongside Cuomo after calling for his resignation

It was major news when Andrea Stewart-Cousins said in March that Governor Andrew Cuomo no longer should lead the state. So it was a bit of a surprise Wednesday when Cousins showed up with Cuomo at an event in Yonkers, which is in the senator’s district.

“Thank you. Thank you very much, governor,” she said at the event.

While Stewart-Cousins made no comment about the scandals Cuomo is grappling with, some Democratic lawmakers who are fiercely critical of the governor noted privately that the majority leader’s presence may have lent Cuomo credibility. Others were more vocal.

“The majority leader got mugged on camera,” said Alexis Grenell, a political consultant. “She decided to take a bullet for her constituents rather than let the governor hold up resources at her expense. Because she is a decent public servant. Her position is unchanged, which is something she reiterated.”

Some lawmakers are Completely shocked that @AndreaSCousins would appear alongside @NYGovCuomo when he is accused of multiple instances of sexual harassment. Says one, “The Governor shouldn’t be lent credence by anyone let alone someone in a position of power to impeach him.” pic.twitter.com/BDS5oZPsj1

A spokesperson for Stewart-Cousins defended the senator’s decision to attend, noting that the event was about a COVID-19 vaccination site in her district.

Meanwhile, Cuomo’s strategy of managing questions that are asked remotely by reporters appeared to backfire when a reporter asked about the harassment charges, then got cut off when trying to follow up.

The question was about the independent investigation into sexual harassment allegations against the governor launched by Attorney General Letitia James.

.@ryantarinelli asks @NYGovCuomo if he will resign if @TishJames investigation into sexual harassment allegations against the Governor are deemed credible. Cuomo Calls it a “review,” and says “let’s see what it says.”

Ryan tries to ask follow up, gets cut off by Cuomo staff.

Another reporter asked if Cuomo had changed his behavior around staff, now that some of them have accused him of inappropriate behavior.

Meanwhile Wednesday, members of the Assembly Judiciary Committee met mostly in a closed-door executive session. The committee is conducting an impeachment inquiry into Cuomo’s conduct, and the chairman provided a brief update. The firm hired to conduct the investigation, Davis Polk, is now following up on tips and leads.

While Cuomo has been pleading with his colleagues since the beginning to let the attorney general’s investigation play out before rushing to judgment, some critics believe he undermined that plea this week when his top adviser accused James of harboring ambitions of replacing Cuomo as governor.