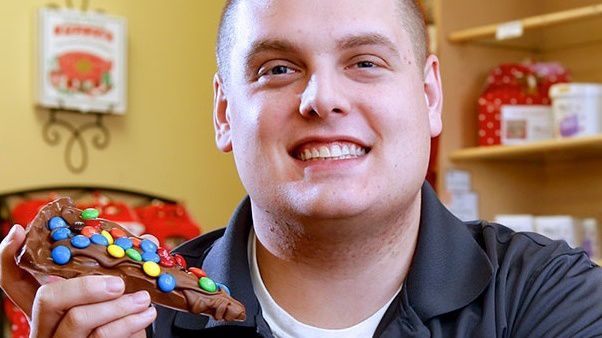 A Marcellus man and his chocolate company certainly had a few strong weeks of sales around the Easter holiday.

Ryan Novak, 32, has owned the Chocolate Pizza Company for 11 years and reaches customers around the world.

Whether he’s in the kitchen or in his showroom, Novak’s work ethic has helped make the Chocolate Pizza Company what it is today.

“Our product gets shipped across the country every day,” he said.

Novak began working at the store’s old Marcellus Main Street location at age 15 and did small jobs. He would end up pursuing an entrepreneurship degree at Syracuse University.

During his senior year, at age 21, he took over the business from the previous owner.

“I thought the concept of chocolate pizza was pretty incredible. And I took that vision to the owner and when she was ready to retire, I bought the business from her,” said Novak.

Before becoming a recognizable figure for his candy, Novak was pretty well-known for a different reason. During his time at SU, he walked on the football team and became the starting placekicker in 2007.

After graduation, Novak could focus more on business. From the day he became owner in 2010, he’s added his creativity to his already unique store menu. He’s never been afraid to experiment with a new recipe.

What started as just basic chocolate and dark chocolate pizza options have expanded.

“We expanded to add colors with colorful gems, and from there we added peanut butter and different toppings," Novak said. "Kind of expand the color line and kind of hit a little bit of everything that people want. We have a ‘Candy Avalanche Pizza’ that is topped with everything from Snickers, Twix, Peanut Butter M&Ms ... everything you can think of on a pizza.”

Over the last decade, business has grown significantly while Novak moved it to a larger location in Marcellus in 2015. While his in-store traffic has always been steady, his online sales have gone through the roof.

“The website has just been incredible for us. The last few years we’ve taken a lot of effort in expanding our SEO reach and our keyword so our products can get found at more places. And, our views to our website has just exploded,” said Novak.

Exploded so much, he recently added a warehouse to his store to help with distribution. His candy has been featured on national television outlets while his reach continues to expand.

“We’ve had orders from a single pizza to our largest order of 31,000 chocolate pizzas we shipped to a major retailer on the east coast that went to 175 stores. So it filled up nine tractor trailer loads of chocolate pizzas,” he said.

Novak admitted his days consist of long hours, and it can be draining. However, at the end of the day, he says it's worth it.

“We made this our home and we’re going to keep this our home. So I absolutely love being here and there’s nothing else I’d rather be doing that’s for sure,” said Novak.

Ryan has received numerous awards for his business. Those include a 40 Under 40 Award and a Young Alumnus of the Year Award from Syracuse University.

For more on the Chocolate Pizza Company, visit ChocolatePizza.com.