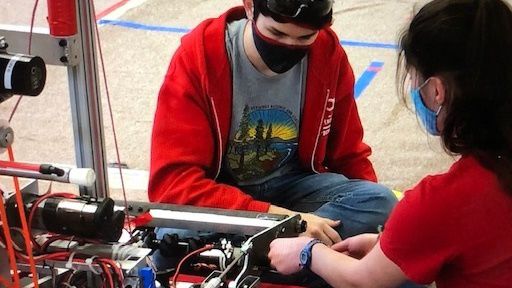 A Different Year for the Ithaca High School Robotics Team

It’s been a different kind of year for the Ithaca high school robotics team.

The team known as “Code Red” has had to limit in-person meetings while the pandemic has led to a virtual competition replacing in person meets.

Ithaca Senior Emma Pellecer has been a member of the team since she was a freshman. As a junior, her memories of last March aren’t all that good.

“Our season was cut short. We were actually right on our way to a regional and it actually got canceled right as we arrived," said Pellecer.

Competitions were canceled, and at the start of this school year, Ithaca’s team of 60 or so members held all virtual meetings. While it was an adjustment, the group continued discussing ways to design a 125 pound robot that could complete different tasks.

“It’s really interesting, it seems like everybody’s ideas come together and it’s like… it’s a miracle. It’s a robot, and it works. It’s fun to see something we’ve worked so hard on function," said Hong.

Recently, team members were able to resume meeting in person again after school. Competitions are generally held in March and like other schools this year Ithaca’s team is competing virtually.​ Instead of physically going to a competition, the team is regularly submitting videos and pictures of their robot to judges online.

Junior Andrew McCracken gathers and sends that content through a system known as Discord.

While things are certainly different this year without the fun of competitions, these students are still building friendships.

“I feel like we’ve gotten more connected in a way. We have much better communication than we have in past years and as a team we’ve found ways to connect virtually in ways that we never have before,” said Pellecer.

Connecting and learning is an invaluable combination for these students who have a very bright future.

Team members said Ithaca alumni and local company sponsors have been instrumental in the success of the program. For more on the “Code Red” team, you can visit Team639.org.