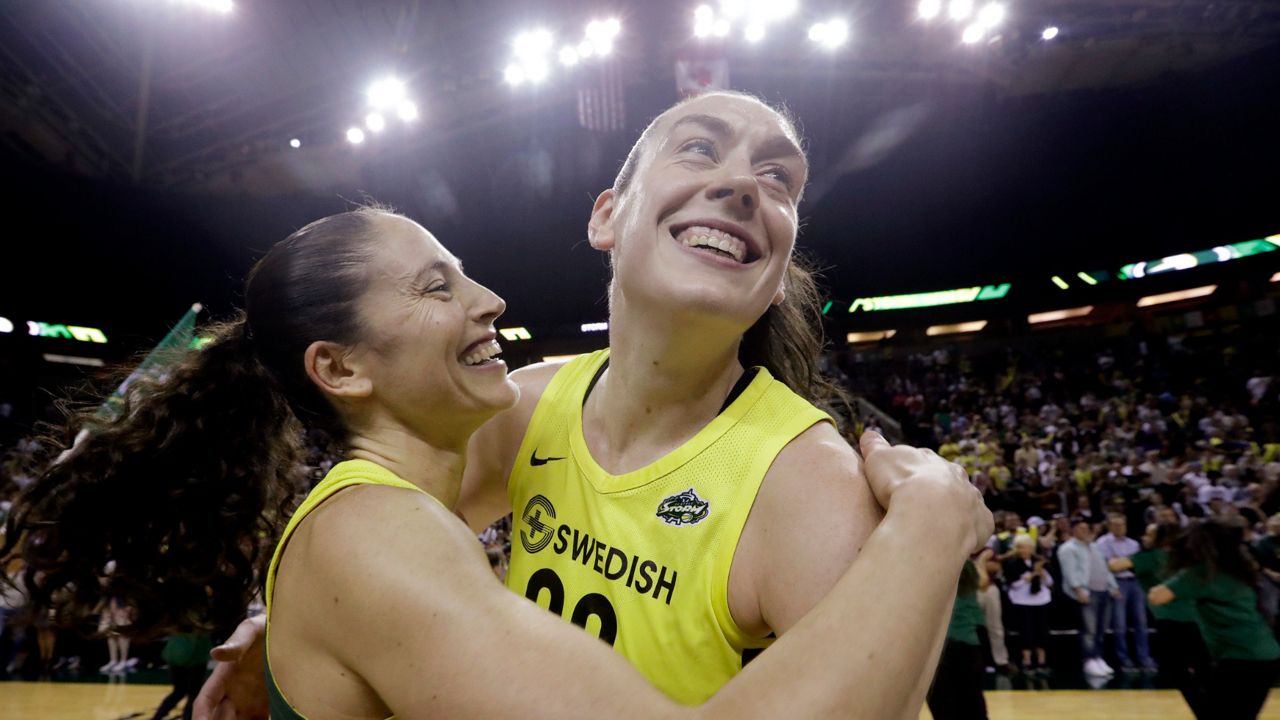 Seattle Storm's Breanna Stewart, right, is embraced by Sue Bird after the Storm defeated the Phoenix Mercury 94-84 during Game 5 of a WNBA basketball playoff semifinal, Tuesday, Sept. 4, 2018, in Seattle. The Storm advanced to the WNBA finals.

Local coaches are finding ways to keep student athletes active and engaged during the pandemic. One coach took it a step further, bringing a celebrity from C-NS in for a surprise video conference call.

Last week a familiar face hopped on the Fulton basketball team’s video call. It was Breanna Stewart, one of the best women’s basketball players in the country. The former Northstar had come to a Fulton basketball camp during her UConn days, and one of the Raiders old coaches reached out to see if she would be willing to chat with the team.

Derek Lyons, the Raiders basketball coach, says it didn't take long for her to respond.

“She literally got back to us in less than two hours and said absolutely,” Lyons said. “Let’s figure out a time and you know we kept it quiet to the girls cause we wanted to surprise them. It’s not every day you get to talk to the best player in her sport on the planet.”

The WNBA Champion had some words of advice for the Raiders. Alexa Patterson is a junior captain on the team.

“[Stewart said] to not take these types of workouts for granted,” Patterson said. “Use [the workouts] to your advantage to get stronger and better for that next level.”

Patterson was joined on the call by Devon Nicholson, who's also a junior captain.

“It was a good reminder to always work hard because you never know where basketball can take you.”

Not only to always work hard, but never forget where you came from.

“With everything she’s done I think she could go off on her own and do her own thing but she still takes the time to come back around to where she grew up and talk to girls who are going through the same thing.”

Alena Wright, a junior captain for the Raiders, agrees.

“I just think it’s inspirational to see someone from Central New York make it so far because you don’t see that a lot. It’s really cool to see,” said Wright.

It’s a small gesture from a four-time national champion, but one that this group won’t forget.