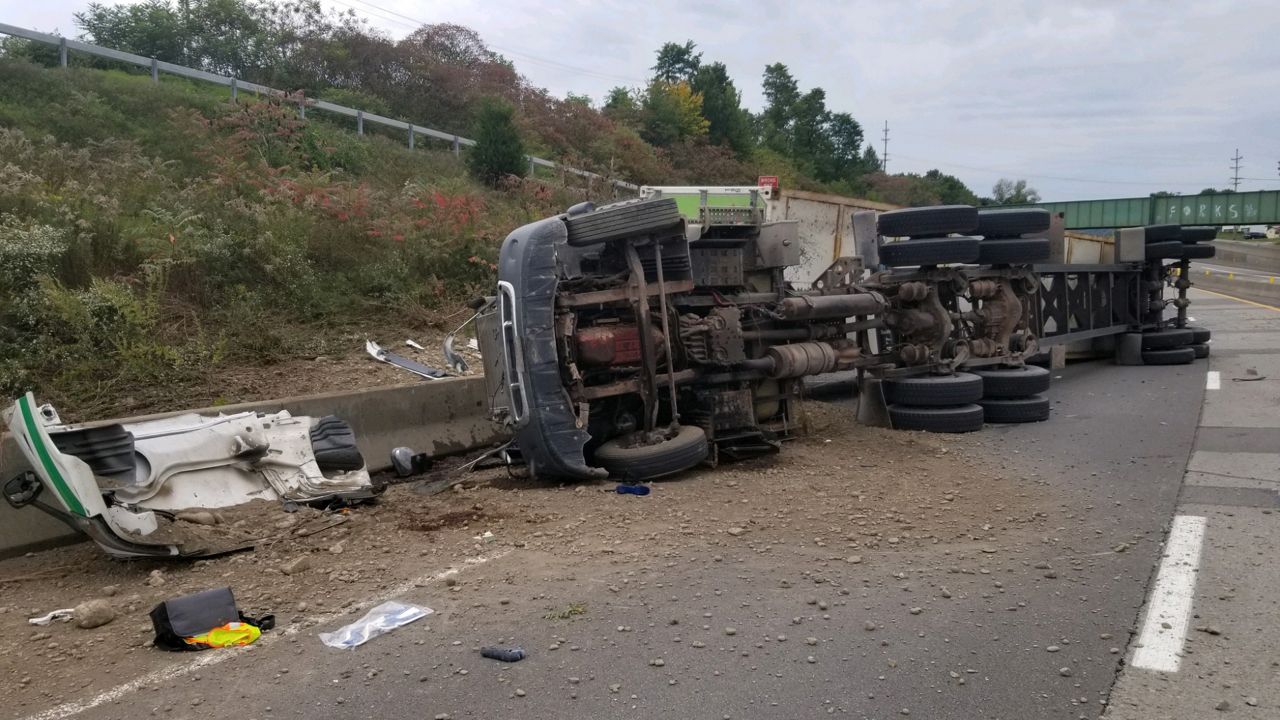 Truck Driver Killed In Crash That Prompted Evacuation of Around 80

The driver of a tractor trailer is dead after a morning crash in Broome County that caused a mandatory evacuation of dozens of people.

The crash happened around 1 a.m. on Interstate 88 at Exit 2. The driver was ejected from the vehicle and located a short distance from the vehicle. He was identified as Jeffrey Lind, 52, of Hallstead, Pennsylvania.

Sheriffs says one vehicle was involved, with just one injury to report. We are still waiting to learn what was spilled, but the Red Cross has opened shelters up at Hillcrest, Chenango Bridge, and Port Crane Fire Departments for those evacuated.

The trailer contained four tanks, each filled with compressed methane gas. One tank within the trailer was damaged and, as a result, an unknown amount of compressed gas escaped. There is no indication that there were any defects with the tractor trailer.

"Obviously natural gas, as everybody knows, is very, very flammable. There's a quarter-mile radius evacuation zone as safety, in case there was any fire or explosion that happened, we want to make sure everyone is safe and away from that," said Mike Ponticello, Broome County Emergency Services Coordinator.

.@BroomeEmergency hard at work as they continue to deal with this tractor-trailer crash on I-88 pic.twitter.com/8cGyarE4cc

Authorities evacuated a quarter-mile area around the crash site in the town of Fenton. Those areas included two trailer parks; one located on E. Niles Road and one located on Towpath Road in addition to residential houses located on Niles Road, Dale Court, Ivan Lane, Chenango Street, Hartley Road and Ritchie Road. NYSEG ALSO responded to the incident and turned off power within a quarter-mile radius.

WATCH: "We heard a knock at the door. I went to the door. Said it's the fire department, you have to evacuate."@JustinBachman3 speaks to someone who had to leave their home in the middle of the night due to the tractor trailer crash on I-88. pic.twitter.com/62wOjES6Nr

Three shelters were set up for people living in the area who were required to evacuate overnight. They are the Hillcrest Fire Station, Chenango Bridge Fire Department, and Port Crane's fire department.

About 75 to 80 people were evacuated. Residents who live within one-quarter mile of the incident are able to return to their homes. The Broome County State of Emergency has also been lifted.

I-88 westbound is now open to drivers, but there are still lane closures eastbound as the crash scene continues to be cleared. Cleanup is expected to continue into Monday afternoon.