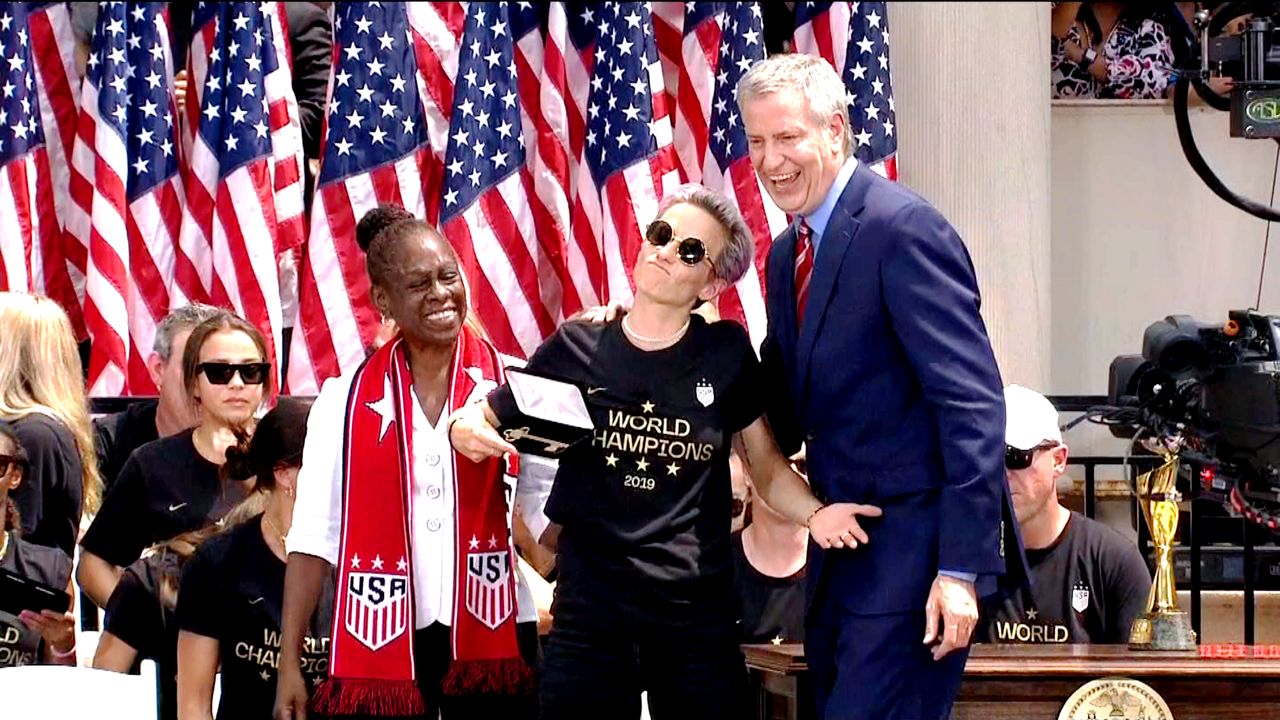 NEW YORK - A blizzard of confetti and large crowds filled the Canyon of Heroes in lower Manhattan on Wednesday to honor the U.S. Women's National Soccer team for its 2019 World Cup victory.

MORE THAN A MILE OF CELEBRATIONS

The World Cup-winning @USWNT received keys to the city at City Hall Wednesday after a ticker-tape parade through Lower Manhattan.

"Nothing that can faze this group. We're chillin'." pic.twitter.com/2aBhBXHT2l

The sights and sounds from a ticker-tape salute to the @USWNT through the Canyon of Heroes. pic.twitter.com/w6uz8cMANP

The team has dominated the world stage, now winning four of the eight World Cup titles since the Women's World Cup Tournament began in 1991. This is the team's second World Cup title in a row.

A dozen floats carried the 23 players and coaches and staff more than a mile in lower Manhattan, up Broadway from the Battery to City Hall.

The ticker tape parade along the Canyon of Heroes is a more than century-old tradition, honoring everyone from athletes to astronauts and world leaders to war heroes.

This 11-year-old at the parade also had the chance to be in France to watch the World Cup. "There was so much love, so many fans, so much support." pic.twitter.com/zxyAi4jeIV

KEYS TO THE CITY

After the parade, the excitement continued with a ceremony at City Hall Park. Each player was given a key to the city by Mayor Bill de Blasio and First Lady Chirlane McCray.

MOMENTS AGO: @USWNT players receive keys to the city from @NYCMayor and @NYCFirstLady. pic.twitter.com/p9nbjZh9Bc

For some of the players, this was actually their second time, as the team also received keys after its 2015 World Cup win.

The @USWNT's @mPinoe enters the City Hall ceremony with the World Cup trophy! The ceremony is currently airing live on NY1. pic.twitter.com/PuKxTPhgcM

The team thanked the city of New York and all their fans for their support over the course of the tournament.

"To you fans, to New York City," co-captain and forward Carli Lloyd said. "You guys are amazing."

Co-captain Megan Rapinoe spoke about the team's efforts to promote equality on and off the soccer field, challenging fans to do the same.

"It's our responsibility to make this world a better place. I think this team does an incredible job of taking that on our shoulders and understanding the position that we have and the platform we have within this world. Yes, we play sports, yes we play soccer, yes we're female athletes, but we're so much more than that. You're so much more than that," said Rapinoe, who won the Golden Ball and Golden Boot.

"It's my absolute honor to lead this team out on the field. There's no other place that I would rather be, even in the presidential race" - @mPinoe tells the crowd outside City Hall in #NYC. @USWNT pic.twitter.com/Mu4ULz8yNP

In March, the players filed a Class Action Lawsuit against the U.S. Soccer Federation, claiming "the female players have been consistently paid less money than their male counterparts."

"We hear you, we believe in you, and we are committed to doing right by you," U.S. Soccer Federation President Carlos Cordeiro said during the ceremony.

Cordeiro said the U.S. Soccer Federation has invested in women's soccer more than any other country in the world.

"We will continue to invest," he said as the crowd shouted demands of equal pay. Cordeiro followed up, saying he believed female athletes deserved fair and equitable pay and "we can get this done."

Rapinoe said this team would, however, hold U.S. Soccer's feet to the fire as it kicks off its victory tour across America later this summer.

After the parade, the team went to Los Angeles for the ESPY awards Wednesday night.

The team will also go a five-game victory tour beginning August 3, when it faces Ireland at the Rose Bowl in Pasadena, California. The other matches are scheduled for August 29, September 3, October 3 and October 6, with opponents and venues still to be determined.

POLITICS ALSO ON DISPLAY DURING PARADE

Prior to the parade stepping off Wednesday morning, New York Gov. Andrew Cuomo said there was no reason why the U.S. Women's National Soccer Team members were paid less than men.

He then signed a bill that will close a loophole that currently allows for women to be paid less than men for doing the same job.

Mayor de Blasio echoed the governor's sentiment, saying that if he is elected president, one of his first acts would be to call on Congress to amend the Amateur Sports Act, to guarantee equity in resources and pay for women's and men's national sports teams.

HOW DID THE TEAM GET HERE?

En-route to winning its second World Cup title in a row and extending its record to four titles, the U.S. Women's National Team won all of its matches in the World Cup in France amid arguably its toughest route ever. After winning its group, including by defeating Thailand 13-0 in its opening match, the U.S. had to take down heavyweights, host France and England, in tightly-fought quarterfinal and semifinal matches.

In the final on Sunday, the U.S. beat the Netherlands, the defending European champions, 2-0, in front of a crowd of 57,900 at Stade de Lyon. Striker Megan Rapinoe, who won the Golden Boot (World Cup's top goalscorer) and Golden Ball (tournament's best player), converted a penalty kick in the 61st minute to open the scoring. About eight minutes later, midfielder Rose Lavelle added a goal after cutting her way through the Dutch defense.

Fans, many dressed in red, white and blue, chanted "Equal Pay!" at the final whistle, a reminder players sued the U.S. Soccer Federation in March claiming gender discrimination. The sides have agreed to mediate the lawsuit.

Rapinoe drew the ire of President Donald Trump by saying she would refuse to visit the White House. Trump called out Rapinoe on Twitter, saying she should never "disrespect our Country, the White House, or our Flag, especially since so much has been done for her & the team." He said he would invite the team win or lose.

But shortly after the title game, Trump tweeted: "Congratulations to the U.S. Women's Soccer Team on winning the World Cup! Great and exciting play. America is proud of you all!"

Rapinoe also called out FIFA on the eve of the championship, suggesting soccer's governing body was not doing enough to grow the women's game, pointing to unequal prize money and the scheduling of the final on the same day as the championships of the CONCACAF Gold Cup in Chicago and the Copa America final in Brazil.

The U.S. Women's National Team never trailed at the tournament and set records with 26 goals and a 12-game World Cup winning streak dating to 2015. Jill Ellis became the first coach to lead a team to two Women's World Cup titles, and the U.S. joined Germany in 2003 and 2007 as the only repeat champions. While the U.S. has four titles, Germany is the only other nation with even two.

The U.S.'s title follows a loss to Sweden on penalty kicks in the quarterfinals of the 2016 Olympics.

Now, after all the memorable drama, they will have a fourth star above the crest on the team's jerseys and a higher platform to advance their cause.

"It's something that we've worked so hard for. All of us, individually, have just faced so much adversity through this whole journey," striker Alex Morgan said. "We've been tested individually and collectively so much. So to see, four years ago, us go from two to three, and now three to four, it's really a dream come true."