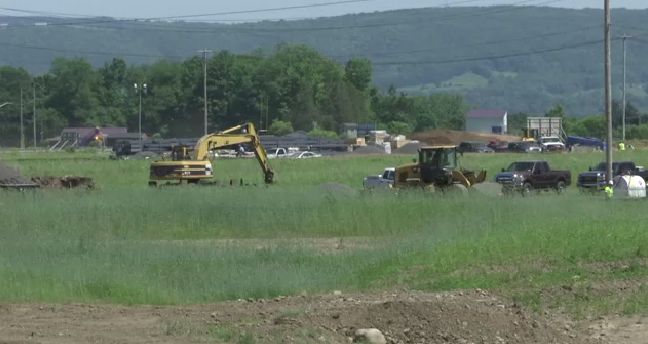 There's optimism in the Mohawk Valley as more companies are calling Herkimer County home. One-business park has filled up and the hope is to have the success continue. Melissa Krull shows us what's in the works in the video above.

HERKIMER COUNTY, N.Y. -- More than a decade of effort seems to be paying off.

"It's a slow and steady pace but I think we're finally there," said Herkimer County Administrator James Wallace. "I think people realized it's not a pipe dream. Things are gonna happen there. It's got great municipal electric. It's a great site going east and west."

"The 5-S South Business Park, which everyone calls the "Pumpkin Patch", is completely full now. The other day we had a closing for JBF Stainless which if you go by the park now you can see that the material is there to start construction. We accepted an offer from another company called, 'Higby Gold'," said Herkimer County Industrial Development Agency Executive Director John Piseck.

There isn't any more room for any businesses in the park, but the Herkimer County IDA Executive Director said there are other parks they're promoting.

"We also have a park in Manheim. We have 30-acres there that we're looking at developing too," Piseck said. "It needs some further infrastructure but things are moving ahead there as well. And then, Schuyler we have about one more area that we can develop and we're talking to a couple companies now too."

There are a few other sites in Frankfort being marketed, including a parcel at the 5-S North Business Park.

"It's just great to be able to talk with people and it's a positive attitude, and I think when people see that they're gonna draw to us too," said Herkimer County Legislature Chairman Bernard Peplinski.

Herkimer County leaders are not limiting the parks to one type of business.

"Like a truck stop area to get gas, do washing of the truck, scales will be there. Food, I'm assuming food will be there and some other entities that will help out," Piseck said.

The 5-S South Business Park is expected to employ 700 to 800 people when construction is complete.