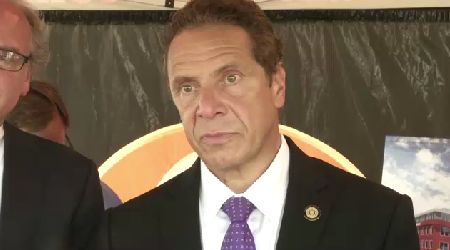 Gov. Andrew Cuomo’s favorability rating has recovered among New York voters, but he continues to face negative numbers for his performance rating and for his handling of key issues, a Siena College poll released Tuesday found.

The poll found Cuomo’s favorability stands at 56 percent to 37 percent, up from a 52 percent to 41 percent rating in July.

While that’s an improvement, Cuomo’s job performance rating hasn’t budged since July, when he recorded a 43 percent approval to a 55 percent disapproval.

Less than half, or 48 percent of voters, are prepared to re-elect Cuomo to a third term next year, while 44 percent would back a generic “someone else” — little change from a 46 percent split in July.

Nevertheless, Cuomo’s base has not deserted him.

Seventy-one percent of liberals hold a favorable view of him, as do 65 percent of New York City voters and 61 percent of suburban voters.

Sixty-four percent of Democrats are prepared to re-elect Cuomo as are 60 percent of liberals.

On key policy issues — tax, the economy, infrastructure, mass transit and education — voters hold a negative view of the governor.

When it comes to mass transit, an especially nettlesome issue for Cuomo given the problems this summer for the New York City subway system, only 26 percent of voters say he is doing an either good or excellent job.

Cuomo scored highest on higher education issues, with 49 percent say he is doing a good or excellent job. Cuomo successfully pushed through a program that provides free SUNY and CUNY tuition to students whose families have qualifying incomes.

Just over a third of voters, 34 percent, believe Cuomo is handling infrastructure issues well. The first half of the replacement for the Tappan Zee Bridge replacement opened in August. New Yorkers are split — 44 percent approve, 42 percent oppose — naming the bridge in honor of the governor’s late father, former Gov. Mario Cuomo.

Cuomo isn’t on the ballot until next year. But in November, voters will decide whether to hold a constitutional convention.

The Siena poll found support for the con con remains strongest with independent voters, who back the referendum 52 percent to 30 percent.

Republicans remain split, while support among Democrats has fallen from 30 percentage points to 13.

Registered voters overall support a convention referendum by a narrow 45 percent to 33 percent split, with 22 undecided. Only 14 percent of voters have read or heard something about the coming vote.

The poll of 771 registered voters was conducted from Aug. 26 through Aug. 30. It has a margin of error of 4.2 percentage points.