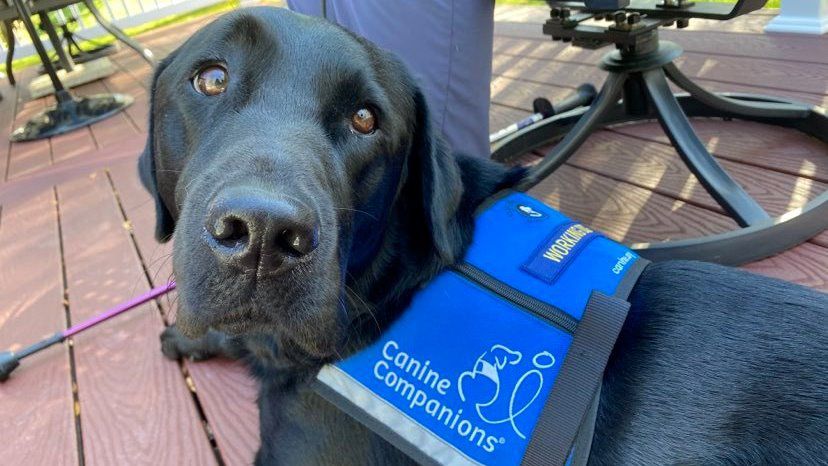 New law makes it easier for veterans to get service dogs, but volunteer trainers needed

A new federal law signed in August by President Joe Biden that makes it easier for veterans suffering from PTSD to receive service dogs has put a new spotlight on the need for volunteers in upstate New York to train the pets.

One of the programs training dogs at no cost to recipients locally is Canine Companions. The dogs here go through about 18 months of being raised in a volunteer’s home before heading to advanced training.

“We had a veteran’s wife recently at the end of one of our classes approach a staff member and say, 'thank you for giving me my husband back,'" said Robin Liberty, a dog trainer with Canine Companions, which trains service dogs for people other than veterans who need them.

Tim Faulkner is one of those volunteers, currently training a dog named Wiggins treat by treat. Wiggins came to live with Tim and Melissa Faulkner when he was 8 weeks old they only have 16 to 18 months to teach Wiggins all 30 commands he needs to know in order to pass his training, including which side to lay his legs when he's laying down.

“They'd like us to teach him all 30. If they don't know all 30 then that's still OK," said Tim Faulkner. “He can kind of be in any environment and be totally comfortable that he can hear any type of noise and not be scared or anything.”

The Faulkners volunteer through Canine Companions and raised three other dogs before Wiggins, and wherever he goes after he leaves their house, his new owner will not pay a penny to get him.

“It's very gratifying to see where these dogs go where their journey takes them and we don't know where it takes them. We just hope that they do change somebody's life because they are little pieces of miracle I say, with lots of fur," said Melissa Faulkner.

Naylor is one of the many service dogs that's been placed with Canine Companions, now living with Jeanne McArdle. who has Ehlers-Danlos syndrome, which causes weak connective tissue and loose joints.

Naylor can do things like close a dishwasher, which prevents McArdle from a lot of pain from bending over. McArdle didn't get her EDS diagnosis until she was 49, and when her doctor said she had to stop doing things that would injure her, she thought a service dog would be the perfect solution.

“One of the greatest gifts I've ever received. I mean, after my husband and my son, having a dog like this, that is that is number three on my list," said McArdle. “And these people [puppy raisers] raised this guy for two years and then gave him up. It's the biggest sacrifice to me that anybody can make for for somebody they don't even know.”

The Faulkners say there aren't too many puppy raisers in upstate New York, but they encourage anyone interested to put in an application.

“It's not like a 24/7 job by any means. And we're here to support new puppy raisers or old puppy raisers. You know, so there is a support system out there," said Tim. Faulkner.