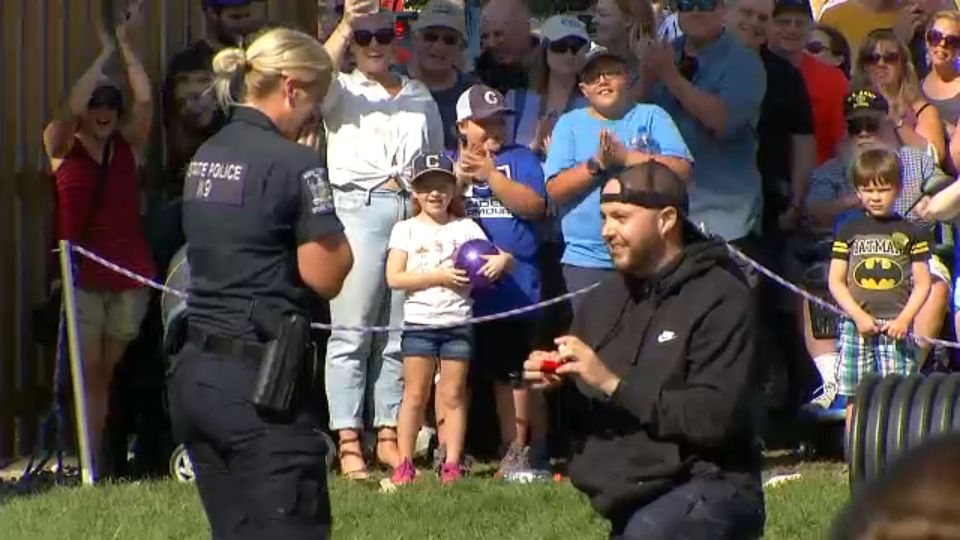 Proposal Steals the Show at the New York State Fair

The New York State Police's canine show started like any other, showcasing tricks, allowing members of the audience to pet the highly trained dogs and a whole lot of humor.

But the mood of the show took a serious turn when a robber entered the arena.

"Where is that bad guy," one trooper asked the audience. "Am I going to get any help from you guys? There he is. He’s trying to hide…Trooper Black, you and Rudd take over.”

New York State Trooper Kylie Black and her canine Rudd came to the rescue. The robber, Jake Bell, turned out not to be such a bad guy after all.

After Rudd attacked Bell, who was wearing protective gear, Bell shocked the state fair with a moment Black will never forget.

Bell got down on one knee and proposed to Black. Hands in her face and completely shocked by the proposal, Black nodded her head.

“I said yes, of course,” she said smiling.

Kylie Black of @nyspolice helped put on a demonstration the @NYSFair. This show was a little bit more special as her boyfriend Jake Bell surprised her by taking part in the show. Now, it's a day the couple will remember this day for the rest of their lives. #SheSaidYes #NYSFair pic.twitter.com/6HoI10VqS5

Bell said he’s been waiting for this moment for months.

“I saw it last year and thought it would be something cool, something unique, something to remember because I know how much she loves the fair and working so it couldn’t have been a better opportunity to put both together,” Bell said.

Black said she didn’t expect the proposal to happen, making the event a success.

“That was pretty incredible,” she said. “I love the fair. And I love what we do with our dogs so to have that no top of it…that was probably the best show.”

The newly engaged couple shares a memory they will never forget.

“I love you,” Bell responded.