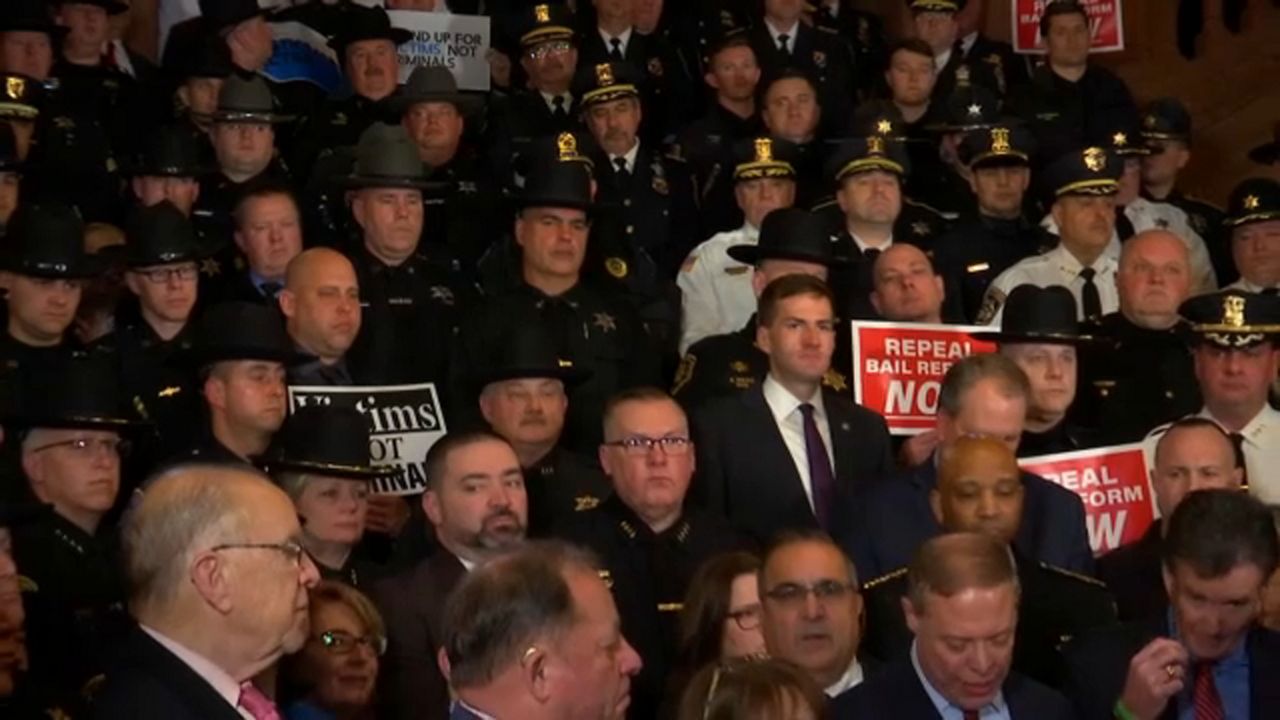 Sheriffs From Across the State Protest Bail Reform Laws

Sheriffs from just about every county in the state showed up in uniform at the state Capitol Tuesday to protest the bail reform laws that went into effect last month.

"The laws made by this legislature has made New Yorkers less safe," said Greece Chief of Police Pat Phelan, who is also a member of the NYS Association of Chiefs of Police. "We are less safe now then we were a year ago."

Republicans from both houses are calling again for a full repeal of the criminal justice bills. They say they can start over on reform once more is heard from law enforcement, district attorneys, and more.

Republican Senate Minority Leader John Flanagan did not specify what sort of reform he would support.

"We predicted this was going to happen and we were proven right," shouted Flanagan to a crowd of around 200 people. "We stand here today unified, and I mean unified, to talk about bail repeal."

But Assembly Minority Leader Will Barclay said he would start with restoring judicial discretion.

"None of us here think that it can’t be reformed somehow, maybe judge’s discretion and other things," said Barclay.

And it’s not just the bail reform laws. Law enforcement has also expressed concern over the discovery laws which require law enforcement to turn over all evidence within 15 days of a crime.

"Every person that makes a report, every witness to a crime, their name, their home address and their home phone number has to be turned over to the defense immediately. And it is causing people to not report things to the police," explained Sheriff Robert Maciol of Oneida County.

Meanwhile, Assembly Speaker Carl Heastie says the issue has been sensationalized and is remaining firm against changes for now.

"When the sun doesn’t come up, everyone wants to blame the bail law," said Heastie. "We’re a month and a couple days into this new law, people want to use sensationalized articles."

Many of these articles have been shared on a Facebook group garnering attention from hundreds of thousands of people and was brought up at the press conference on Tuesday.

"Early on I started a Facebook page, called 'Repeal Bail Reform,'" said Sheriff Jeffrey Murphy of Washington County. "In just three weeks we had a 165,000 people join that group."

Senate Majority Leader Andrea Stewart-Cousins expressed her dislike of the Facebook group saying it is filled with hateful rhetoric.

"I’m a bit disappointed that there was no denouncement of hateful rhetoric. We can have legitimate policy disputes and we will, but I would certainly want in any opportunity to be able to denounce hate," said Stewart-Cousins.

While Stewart-Cousins has shown signs of support to changes to the bail reform law, some Senate Democrats like Senator Monica Martinez are taking somewhat of a stronger stance, saying she will not vote for a finalized budget unless there are changes to the criminal justice bills.