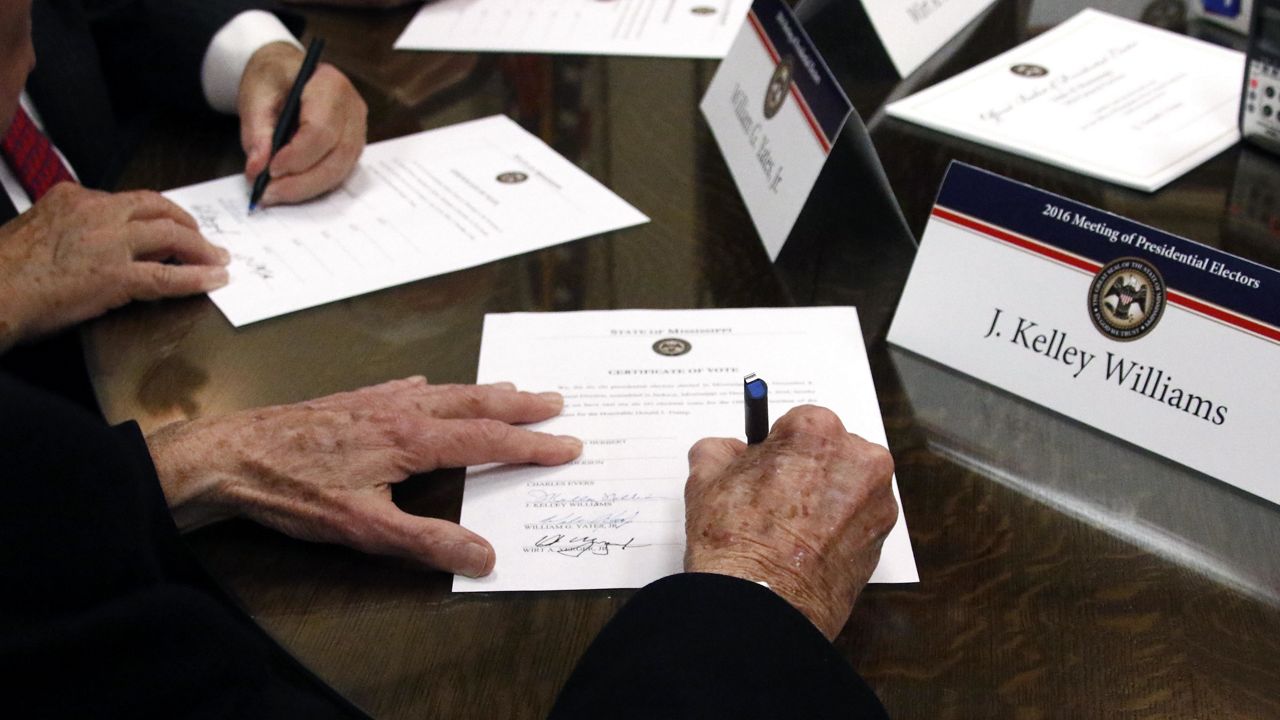 FILE - In this Dec. 19, 2016, file photo members of the Mississippi Electoral College sign certificates of vote in the process of formally casting their electoral votes in the 2016 General Election for President and Vice President of the United States at the Capitol in Jackson, Miss. (AP Photo/Rogelio V. Solis, File)

What is the Electoral College and How Does it Work?

NATIONWIDE — Presidential electors are meeting across the country on Monday, Dec. 14, to formally cast the votes to pick Joe Biden as the next President of the United States.

Monday is the day set by law for the meeting of the Electoral College. In reality, electors meet in all 50 states and the District of Columbia to cast their ballots. The results will be sent to Washington and tallied in a Jan. 6 joint session of Congress over which Vice President Mike Pence will preside.

The electors’ votes have drawn more attention than usual this year because President Donald Trump has refused to concede the election and continued to make baseless allegations of fraud.

Biden is planning to address the nation Monday night, after the electors have voted. Trump, meanwhile, is clinging to his false claims that he won the election, but also undermining Biden’s presidency even before it begins. “No, I worry about the country having an illegitimate president, that’s what I worry about. A president that lost and lost badly,” Trump said in a Fox News interview that was taped Saturday.

In each presidential election, there are 538 electoral votes up for grabs. A candidate must get a simple majority – 270 votes – in order to win the presidency.

In 32 states and the District of Columbia, laws require electors to vote for the popular-vote winner. The Supreme Court unanimously upheld this arrangement in July.

Electors almost always vote for the state winner anyway because they generally are devoted to their political party. There’s no reason to expect any defections this year. Among prominent electors are Democrat Stacey Abrams of Georgia and Republican Gov. Kristi Noem of South Dakota.

The voting is decidedly low tech, by paper ballot. Electors cast one vote each for president and vice president.

Electors, the predesignated people in each state who cast these votes, are allotted to states based on the total population and amount of congressional districts.

While it seems simple, the Electoral College is one of the most divisive and oftentimes confusing parts of the U.S. election process.

Here’s a little bit about why the Electoral College is so important:

The Electoral College was devised at the Constitutional Convention in 1787. It was a compromise between those who wanted direct popular elections for president and those who preferred to have Congress decide. At a time of little national identity and competition among the states, there were concerns that people would favor their regional candidates and that big states with denser populations would dominate the vote.

The Electoral College has 538 members, with the number allocated to each state based on how many representatives it has in the House, plus its two senators. (The District of Columbia gets three, despite the fact that the home to Congress has no vote in Congress.)

To be elected president, the winner must get at least half plus one — or 270 electoral votes.

This hybrid system means that more weight is given to a single vote in a small state than the vote of someone in a large state, leading to outcomes at times that have been at odds with the popular vote.

In fact, part of a presidential candidate’s campaign strategy is drawing a map of states the candidate can and must win to gather 270 electoral votes.

Who Are These “Electors?”

While the U.S. constitution offers little guidance on who can be an elector, it does contain strict regulations as to who does not qualify for the position. Article II, section 1, clause 2 provides that “no Senator or Representative, or Person holding an Office of Trust or Profit under the United States, shall be appointed an elector.”

Choosing of the electors is a two-part process.

The first part of the process, which varies from state to state, consists of statewide political parties selecting a slate of possible electors by either a nomination at a party convention or by a procedural vote from the party’s central committee.

Electors are often high-ranking members of either political party, chosen to honor their service to the government.

The second part of the process occurs during the states’ general elections; when voters cast their ballots for president, they are also selecting the state’s electors to represent their vote in the Electoral College.

Since electors are allocated to states based on the total population and amount of congressional districts, states have widely varying amounts of electoral voters.

For example, the states with smaller populations such as Wyoming — the least populous state with just over half a million people, per 2019 estimates — have three electors each. California, the most heavily populated state with over 39 million people, also has the most electors in the country at 55.

The Electoral College in Practice

In essence, the Electoral College means that voters do not cast their ballots directly for the president; instead, they choose electors to vote on their behalf.

Individual states get to choose how to allocate the final electoral vote in presidential elections, and most have opted for the “winner-take-all” system. In these states, which include 48 of the U.S. states and Washington, D.C., whoever wins the popular (or people’s) vote wins all of the electoral votes as well.

Say a candidate barely scraped by in California with 51% of the people’s vote — all 55 of the state’s electors would still go to the candidate in question.

This more complex system can — and has — lead to the two states ultimately giving out electoral votes to more than one candidate.

In fact, Trump won the presidency by gaining 304 Electoral College votes to Hillary Clinton’s 227 in 2016, but lost the popular vote by a little over 2%. Seven “faithless electors” voted for other candidates.

It was the fifth time in history that a president lost the popular vote but still gained enough electoral support to win the White House. More Americans — 65,853,514 million of them, per official count — voted for Clinton than any other losing candidate in modern history, prior to President Trump's loss in the 2020 election.

So how did Trump still win?

The mismatch can be explained by Trump’s extremely narrow victories in large states like Wisconsin, Florida, and Pennsylvania, according to Pew Research. Despite only winning the states’ popular votes by slim margins, Trump gained all of their electoral votes. As such, Clinton’s popular vote sweep of states like California, Illinois, and New York wasn’t enough to put her Electoral College vote over the required 270 threshold.

Since 2000, bills have been introduced in every single state to change the process of electing the president, according to the National Conference of State Legislatures (NCSL). Initially, most proposed switching to the system used by Maine and Nebraska, while more recent legislation advocates for a complete switch to the nationwide popular vote.

Abolishing the Electoral College altogether wouldn’t be easy, and would require a Constitutional Amendment. Since such a move necessitates a two-thirds vote in both chambers, followed by a ratification by the legislatures of three-fourths of the states, it is unlikely to happen in the near future.

How This Shapes 2020 and Beyond

President-elect Biden’s aides have a message for President Trump and his supporters: It’s long past time to move on.

With the Electoral College set to formally elect Biden as president on Monday, his aides say they hope Republicans will consider their own long-term interests (and the country’s), accept Trump’s defeat and focus their attention on fighting the coronavirus pandemic and staving off economic tumult.

Republicans, by and large, have stood by Trump as he’s made unsubstantiated claims of a rigged election, and they show no signs they’ll give Biden the semblance of a honeymoon period. Biden will come to power with a narrowly divided Senate — next month’s runoff elections in Georgia will decide who will control the Senate — and a thinned Democratic majority in the House as Republicans picked up seats even as Trump lost.

But aides are pointing to Biden’s strong approval numbers, tallying a record 81 million votes and an electorate worn by the pandemic in their attempt to nudge Republicans to cooperate. Mike Donilon, a senior adviser to Biden, said the American electorate is looking for Democrats and Republicans to get in sync.

In making the case for a mandate, Biden’s team points to the president-elect retaking Rust Belt states that helped spring Trump to the White House four years ago as well as wins in Arizona and Georgia — firsts for a Democratic presidential candidate since the 1990s. Biden also won the popular vote by more than 7 million people, powered by strong showings with women, people of color and independents.

“We have won so many times, at this point, in so many different ways. We’re just excited to keep on winning,” said Jen O’Malley Dillon, Biden’s deputy chief of staff, shrugging off Trump’s challenges. “(Monday) obviously is a big day as it takes on a little bit more import than maybe traditionally it does.”