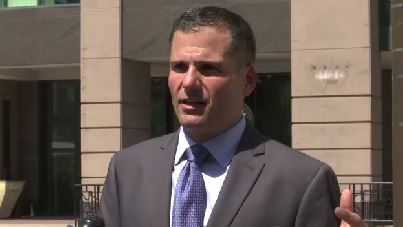 Gubernatorial candidates differ on how to lower taxes

Governor Andrew Cuomo's opponents in the race for governor have differing views of the state's cap on local property tax increases. Republican Marc Molinaro says he would make the measure permanent so it would not need to be re-approved by the Legislature every couple of years.

"I would make one important change to the tax cap: I'd seek to make it permanent," Molinaro said. "With all due respect to Cynthia Nixon and the governor, I don't think they truly appreciate the burden of property taxation on New Yorkers."

Molinaro also says he would try to reduce the burden on county governments that leads to increasing taxes by shifting the cost of Medicaid administration to the state.

"It is so complex and so complicated, and having every county the city administrating a separate division of the delivery those services, it's inefficient, it's ineffective and it's demoralizing," Molinaro said.

But in addition to being complicated, it's also an expensive idea, costing the state billions of dollars if it happened. Molinaro, whose family has benefited from the Medicaid program, didn't have any details on how he would do it.

Cuomo's Democratic primary opponent, meanwhile, says she would weaken the cap by making it easier for voters in school districts to override it. Currently, it takes a 60 percent majority to approve budgets breaking the cap. She supports a 51 percent majority.

"If they would approve an increase by 60 percent, then I would not make it so high. I think a simple majority would be worthwhile," Nixon said.

Nixon's allies include education advocates who have been critical of the tax cap, which limits the amount a school district or local government raises in taxes at 2 percent or the rate of inflation, whichever is lower. Nixon insists she supports limits on tax hikes.

"I have said, though, that I think if a locality wants to increase taxes on itself to pay for something like schools, then we should not make it so onerous," Nixon said.

But Cuomo says a watered-down cap is the same as not having one at all.

"That, in effect, does away with the cap because that's just a simple majority vote," the governor said. "The cap requires 60 percent, which meant it was harder to get passed the 2 percent."