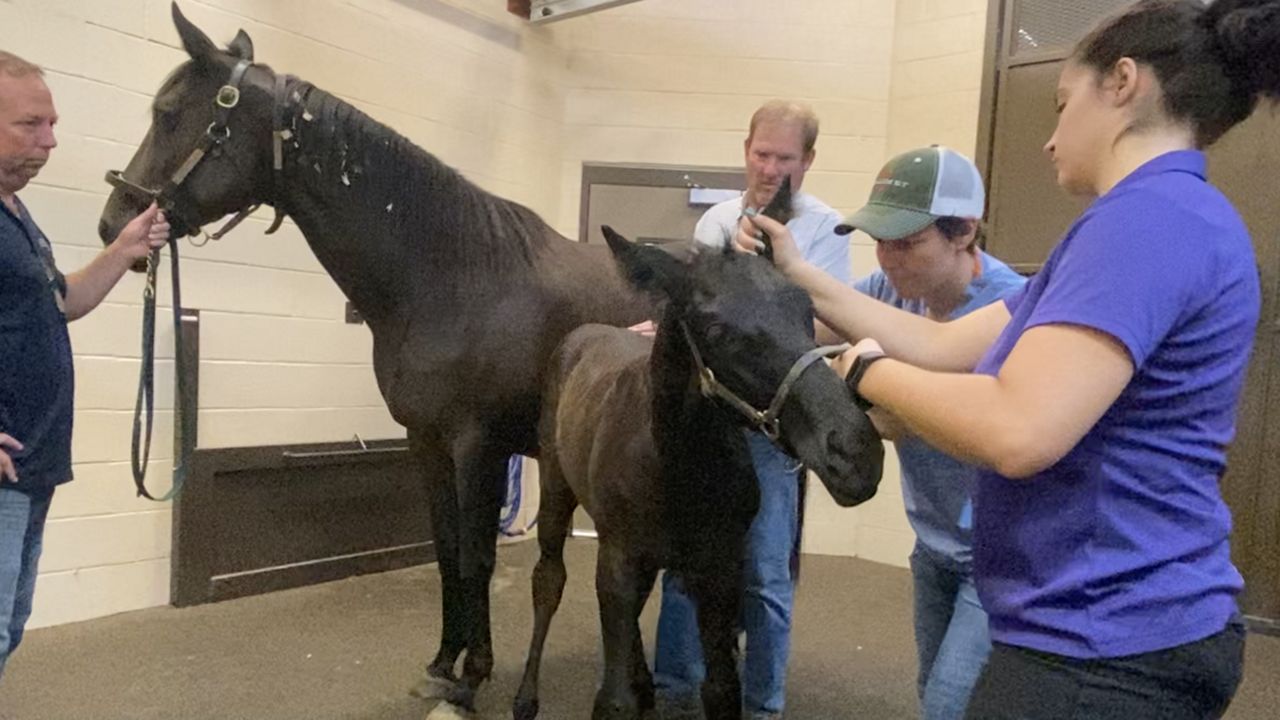 The young colt’s potential racing career is at least two years away, but at the end of June, the horse underwent a procedure that could help him get to the racetrack one day.

“This foal has an angular limb deformity, it’s very subtle on this radiograph,” Dr. Scott Ahlschwede said as he pointed to an X-Ray image of the animal’s leg.

”The thing we’re going do is, he toes in, so we’re going to make a sounder racehorse, a racehorse that toes in, puts more pressure on its joints.”

Just 70 days old, the nervous youngster was accompanied by his mother at the Rood and Riddle Equine Hospital in Saratoga Springs.

“Mares and foals, they’re a team,” Ahlschwede said. “Mamas don’t leave their babies, so they’re together all the time.”

Ahlschwede says the clinic’s busiest time of year coincides with the summer racing season at the Saratoga Race Course, which is just across the street.

Ahlschwede and his wife, Patricia, have run the facility since 2014. Their team of veterinarians and techs provide all levels of care to horses of various breeds.

“Our particular practice is always focused on taking care of the horses at the highest levels we possibly can,” Ahlschwede said. “We believe in education. We believe in training.”

Once the anesthesia took effect, the colt was ready to have a screw placed in his growth plate, after which he was expected to be back on his feet a short time later.

“It’ll be done and then he’ll come back and lay down in the room, and then get up and he’ll go home back to the farm this afternoon,” Ahlschwede said after the horse was wheeled into the operating suite.

As an ambulatory specialist, Ahlschwede spends most of his time away from the clinic.

“Predominantly, what I do is thoroughbred work for commercial thoroughbred breeding farms,” Ahlschwede said after starting the engine to the truck that he only half-jokingly refers to as his office.

This afternoon, he was heading to the farm he and his wife own.

“We’re going to go out there and see what’s going on and check a couple of foals and see what else we might need to do,” he said as his truck wheeled closer to the sprawling property.

The farm is a short drive from the equine hospital. While Ahlschwede grew up on a Texas ranch with many different animals, he didn’t get up close to race horses until a trip to Kentucky after high school.

“These thoroughbreds are amazing animals, they are amazing athletes,” Ahlschwede said. “When you get around them you just get addicted to being with them and you want to learn everything about them.”

When he arrived he found Patricia checking up on another one of their newborns.

“This bright line here, that is the surface of the lung or the pleura,” Dr. Patricia Ahlschwede said as she scanned the animals chest with an ultrasound machine. “When you have abscesses you can see that. So far it looks very clean.”

Patricia Ahlschwede, who grew up in Chile, said there did not appear to be any causes for concern.

“She’s been coughing a little bit, I don’t think she has any fever so we’re going to make sure that she stays healthy,” she said. “She’s a nice little filly.”

A few minutes later in a barn on the other side of the farm, the couple paid a visit to a mare who will give birth next spring.

“Right here, you can see the fetus and the heart beating inside the fetus,” Scott said while examining the mare with an ultrasound. “That’s a horse that’s going to be racing at Saratoga three years from now as a two-year-old, hopefully. It’s always exciting, there’s never a dull moment.”

For Scott and Patricia, raising and caring for horses young and old is a responsibility to cherish.

“When you see them grow up healthy after they had a hard time at the beginning and then you see them in the races or doing something completely different, it’s a personal satisfaction,” Patricia said.

“That’s what keeps us going, the love we have for the animal,” Scott said. “When something is going bad and when we do it and turn it around and we save that animal or we treat a disease, it feels really good.”