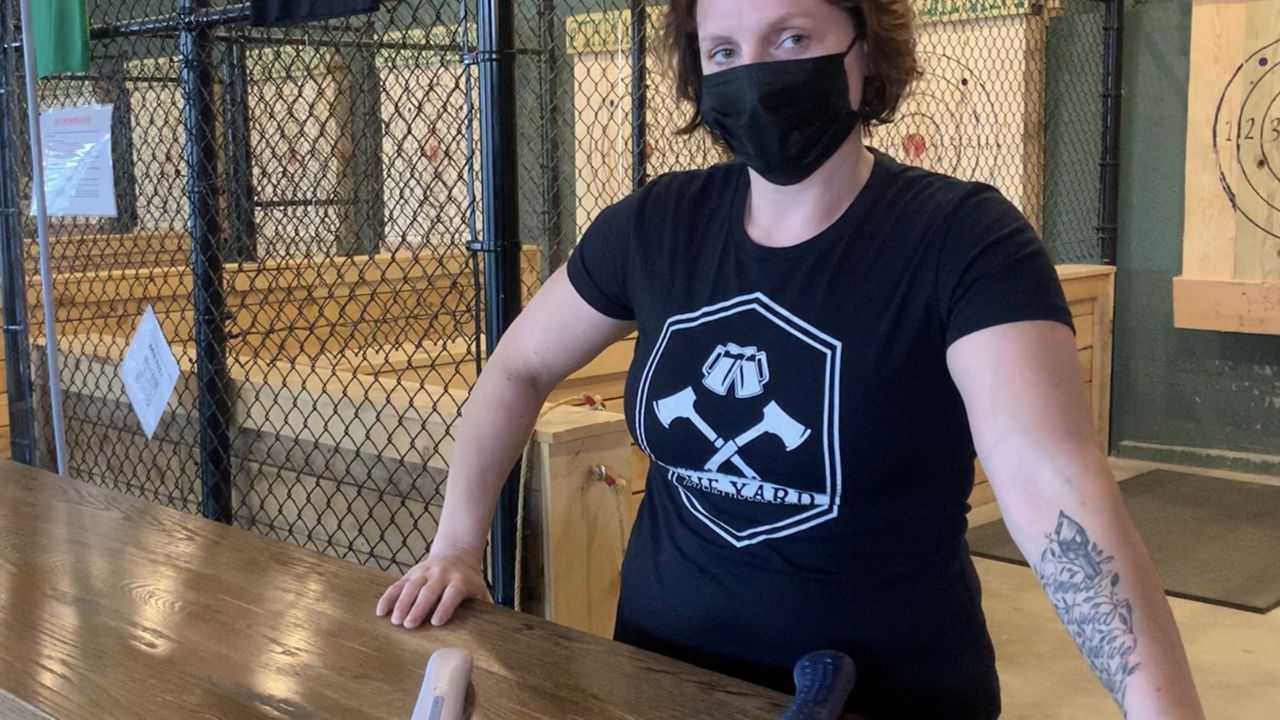 Hatchet Businesses Get the Axe Under Cuomo Executive Order

Over the last week, hatchet houses in the area say they were visited by the SLA, and one of the main drivers of their business was getting the axe.

Leyla Kiosse, owner of The Yard in Albany, says she was visited at the close of business on Thursday last week by two state liquor authority inspectors. They told her they’d received a complaint and she was violating an executive order issued by Gov. Andrew Cuomo.

"They said that there is 'Eating, drinking and axe throwing going on here,' and I deadpanned them and I said, 'yeah,' " said Kiosse.

"Essentially what they’re saying is the Department of Health guidelines say that you cannot be standing up in a restaurant, you have to be seated at all times," Kiosse said. "That’s not what that guideline says. What it says is that the only time you can take your mask off is when you’re seated."

Jason Micare, owner of Generation Axe, said he got a similar visit and decided to completely shut down until he can get an answer from the state on what he’s allowed to do.

"I’m trying to get a hold of someone to tell me to close. Nobody told me to close, but they told other people to close, and the last thing I want to do is have a big fat fine," Micare said. "So I closed and I gave up $20,000 worth of business I canceled."

Kiosse is in a similar boat. She canceled 70 reservations the weekend of Valentine’s Day, accounting for at least a 60 percent loss in revenue. While The Yard is classified as a bar and restaurant and is staying open serving just food and drink, Generation Axe is not.

"Someone has to listen to my very, very valid argument, and this isn’t, ‘Hey, I’m just like bowling, I should be open,’ this is argument that, ‘Hey, you’re calling me a restaurant but I’m a sports facility that happens to sell beer and you’re forcing me to sell a hot dog with that beer, so you’re saying I’m a restaurant,'" said Micare.

Both Kiosse and Micare say they’re following all state protocols to keep customers safe and are unclear why this suddenly came up, after months of operating without issue and with inspections.

"Axe throwing has been clearly prohibited under the Department of Health’s guidance for food service since the start of the pandemic - and we have made that point abundantly clear to all SLA-licensed establishments through guidelines and FAQs posted to our website since the reopening of dining in June.”

Both owners Spectrum News spoke with say this is only not permissible, because of the executive order forcing them to serve food with their alcohol.

"We have followed the letter of the law to the best of our ability," Micare said.

Kiosse is filing a federal suit against the state and Gov. Cuomo on Friday, hoping for a temporary restraining order to keep axe throwing going while this all gets ironed out.

Kiosse is seeking a TRO so that axe throwing can continue. She says other local business owners she knows have relinquished their liquor licenses in order to keep axe throwing but none of them understand why bowling alleys and billiards with bars can operate.