NEW YORK - Thousands of people gathered in lower Manhattan on Wednesday to mark 18 years since the September 11th terror attacks, still raw in the minds of countless New Yorkers and other Americans.

It's been 18 years since the September 11th attacks, but the pain is still raw for many New Yorkers.

Here's a recap of just some of the ways the city honored the victims Wednesday. https://t.co/E2sAuw6ExJ pic.twitter.com/XrBSeN72Mg

THE READING OF THE NAMES

The city's annual memorial ceremony, including the reading of the victims' names, took place at the National September 11th Memorial and Museum.

In pairs, people read the names of those lost. Relatives shared their pain.

"My aunt, for whom I named my daughter after," a relative said. "Azucena Maria de la Torre. We love you forever, we miss you infinitely, and our lives have never been the same."

"My husband, Benjamin Keith Clark," his wife said during the Reading of the Names. "We're expecting our first grand and so many milestones that he's missed … This one is kind of hard."

A moment of silence was held at 8:46 a.m. to mark the exact moment a hijacked plane flew into the North Tower of the World Trade Center.

Another moment of silence was held at 9:03 a.m., marking the moment Flight 175 collided into the South Tower.

Four more moments of silence and bell rings were observed after that:

"My brother, Ryan Daniel Fitzgerald," said his sister. "Not a day goes by that we don't think you're going to walk through that door."

9:59, when the South Tower collapsed.

"My father, Firefighter Martin Nicholas DeMeo, of Hazmat Company 1," said his son. "We miss you, we love you, and we know that you're proud of us."

10:03, when passengers fought back on Flight 93 and a hijacked plane heading to the capitol, crashed into a Pennsylvania field in Shanksville, Pennsylvania, instead.

"My cousin, Port Authority Police Officer David LeMagne," the officer's relative said. "There truly isn't a day that passes that we don't think about you and about this tragic day. We love you and we miss you."

"Already far too many have died. Over 2,000 people have died already from these illnesses, so the numbers will continue to be staggering. And this is part of the story of 9/11, and we have an obligation to honor those as well," said Alice Greenwald, the president of the National September 11 Memorial & Museum.

September 11, 2001 was the worst day in the New York City Fire Department's history. A total of 343 FDNY members were killed. Fifteen of them were firefighters at Engine 54, Ladder 4, Battalion 9 in the Theater District. It suffered the most deaths of any firehouse that day.

The FDNY, family, and friends honored them Wednesday in an annual ceremony at a memorial park around the corner from the firehouse on West 48th Street.

The names of those firefighters were read out loud and flowers were placed on a memorial in their honor.

"You are forever changed when you lose a child, you are forever changed. In the beginning days, you don't think you will get through the next hour. But as time, which is a healer, goes on, you realize that you and you have the opportunity to choose how you are going to live the rest of your life," said Maureen Santora, who lost her son in the attacks.

We are at the @FDNY firehouse known as #ThePrideofMidtown in the #theaterdistrict. It lost 15 FF’s on #Sept11 18 years ago . One of several ceremonies will take place here today to help us #NeverForget . pic.twitter.com/w9PtpmwFjj

The families of the fallen firefighters said attending the ceremony was difficult but also reminiscent of a homecoming. They said it was a way to connect with their lost loved ones.

Police officers across the city gathered Wednesday morning as the names of the 23 members of the New York City Police Department killed on September 11th were read in an honorary roll call.

Officers who were not actively responding to calls gathered in front of their respective commands at 8:46 a.m., the time the first plane struck the North Tower.

At the 13th precinct stationhouse on East 21st Street in Manhattan, the names of each NYPD member killed in the line of duty was read aloud, followed by a moment of silence.

Also honored were the more than 200 NYPD members who have died from 9/11-related illnesses.

The memorial roll call was held at command centers in all five boroughs.

On Staten Island in the evening, the annual Postcards Memorial was held to honor the 274 borough residents killed on September 11th, as well as Staten Island first responders who have died from 9/11-related illnesses in the years after the attacks.

Even steeped in its sadness - there is no place I would rather mark the lives of those lost on 9/11, and those who continue to pass of wtc illnesses. #StatenIsland @NY1 pic.twitter.com/Um61xjh4M2

CEREMONY AT THE PENTAGON

President Donald Trump was in Washington and attended a service at the Pentagon, where 184 people were killed on September 11, 2001, when American Airlines Flight 77 was hijacked and crashed into the west side of the building.

President Trump recalling his memories of being in Lower Manhattan on #9/11. Recalls seeing the WTC on fire. Shared memories of the aftermath and the heroes who stepped up to rescue the injured. @NY1 @SpectrumNewsDC pic.twitter.com/wyWwuJMyRf

"For every American who lived through that day, the September 11th attack is seared into our soul. It was a day filled with shock, horror, sorrow, and righteous fury," said Trump. "To each of you, the First Lady and I are united with you in grief. We come here in the knowledge that we cannot erase the pain or reverse the evil of that dark and retched day."

Trump also referenced the recently canceled meeting at Camp David with Taliban leaders. He said the talks were canceled after a Taliban car bomb killed a U.S. soldier and 11 others last week.

The @FDNY from East Harlem - Ladder 14, Engine 35, Batallion 12 - unfurled this banner at the #Pentagon. It hung over the WTC site in 2001. @NY1 @SpectrumNewsDC pic.twitter.com/CSXkhbdmxO

United Flight 93 was hijacked out of Newark International Airport and originally headed for San Francisco, before terrorists stormed the cockpit.

It's believed the flight was headed for Washington, before the heroes on board made the decision to fight back.

United Flight 93 crashed as passengers and crew attempted to regain control of the plane from hijackers.

All 40 people on board were killed.

The annual Tribute in Light illuminated the skies over lower Manhattan on Wednesday night.

Two beams meant to represent the Twin Towers are lit until dawn. They can be seen for miles. 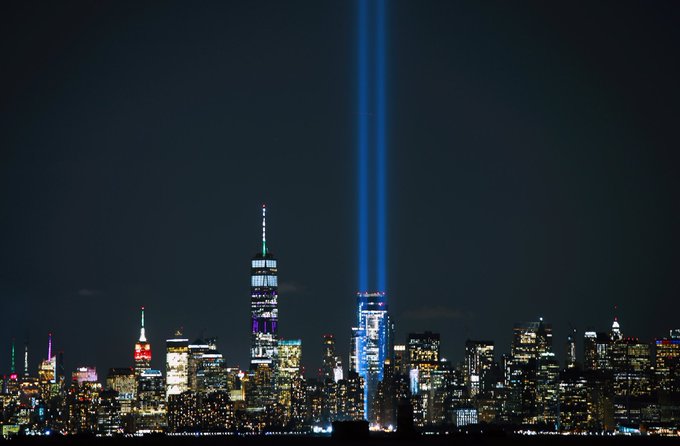 The tribute debuted six months after the terror attacks, in March of 2002, and has continued on every September 11th since.

Victims of the September 11th attacks were honored during another remembrance event in Brooklyn on Tuesday.

NYPD Detective Luiz Alvarez was among those recognized. He died earlier this year of cancer related to his work at the World Trade Center site after September 11th.

Alvarez is credited with helping secure permanent health benefits for first responders after testifying on Capitol Hill earlier this year.

Congress reauthorized the September 11th Victim Compensation Fund in July. The bill ensures money for the fund through 2092, essentially making it permanent for people who've become sick from illnesses related to the attacks. The fund had been rapidly running out of money over the last few years.

The new proposal would extend benefits to survivors of uniformed sanitation workers and correction officers.

About five thousand employees across several New York City agencies would be covered over time by this legislation.