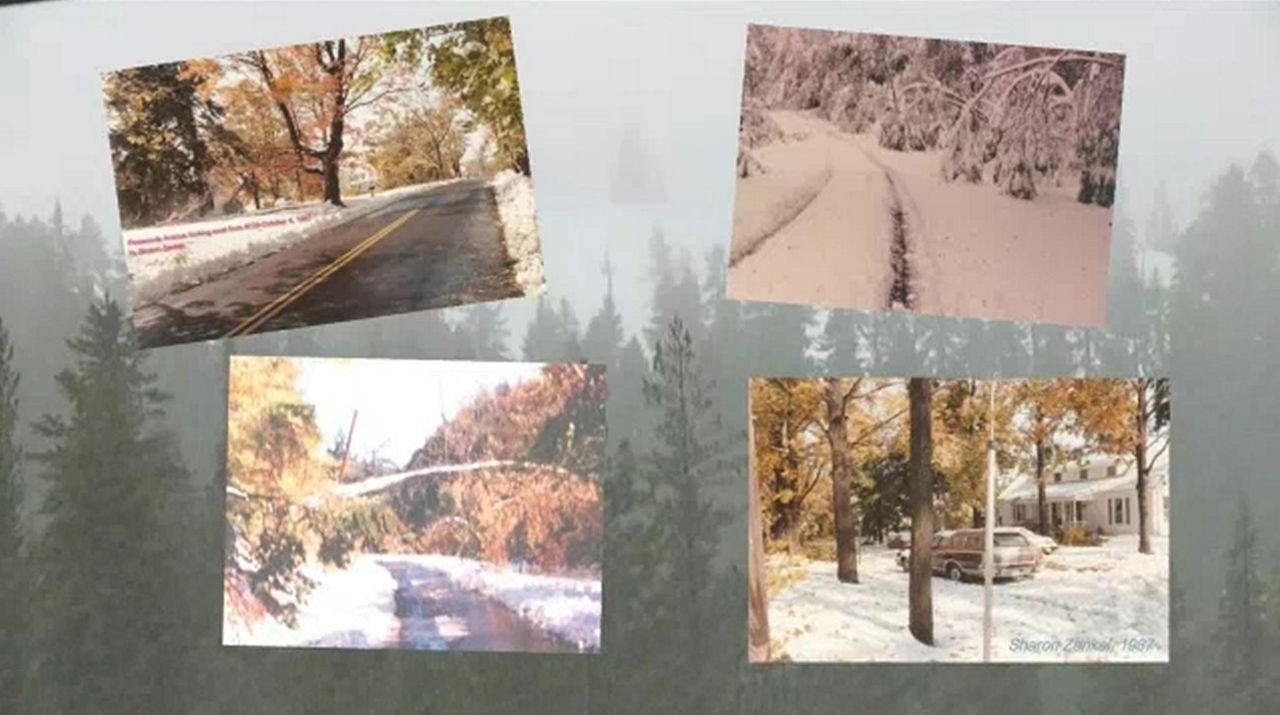 ALBANY, N.Y. — Neil Stuart was a few years into his undergraduate program at UAlbany when he woke up on Sunday, October 4, 1987.

When he did, Stuart was greeted by the oddest early-October weather he'd ever encountered: at least five inches of snow covering the Colonial Quad dormitory. More snow was still falling.

"Of course, we had to go out and play in it," Stuart said with a smile. "We had snowball fights."

It was especially interesting to him, because of his major course of study: as an atmospheric science student, Stuart had studied the weather models leading up to that weekend. None of them predicted what was to come.

"It was a freakish thing," says Roger Green, who in 1987 was living on Second Avenue in Albany. He was watching television the morning of the 4th, when his electricity suddenly went out.

"I went to the window, and I saw — 'Hey, it's snowing!' I'd had no idea that it was snowing," Green recalled, some thirty years later. "But I thought, ‘well this must be isolated to just my neighborhood.’"

It wasn't. The snowstorm would drop 6.5 inches of snow on Albany by midday Sunday, and that was one of the lower totals in the region. Locations in Rensselaer County, Schoharie County, Western Massachusetts and the Catskills all saw more than a foot of snow -- as much as 20 inches in the higher elevations. With leaves still firmly clinging to the trees, it was a recipe for disaster.

"Power outages, trees down, power lines down. Medical events, cardiac events," and more, according to Colonie Police Lieutenant Robert Winn. The veteran cop was just a part-time emergency dispatcher in 1987, doing some extra work on a visit home from college.

"Just incredible -- everyone in a Colonie was affected by this storm, and it seemed like they all called us that day," Winn remembers. "It was then, and might still be today, the most calls for service we'd ever received in a 24-hour period."

In some cases, electricity remained out for more than a week. School districts in the Capital Region were closed for a day in some cases; others missed an entire week of class. The National Weather Service reported that atmospheric conditions had developed almost perfectly: cold air from the north, married with moisture at high altitudes, and surface temperatures that plummeted just low enough to allow the heavy, wet snow to stick.

Within three days, the snow was all but gone: temperatures in the 70's melted everything, and municipal crews were able to clear away felled tree limbs and repair broken electricity lines.

The long-range impacts have become more anecdotal than anything: Neil Stuart became a meteorologist with the National Weather Service. Roger Green blogged about the storm in 2007 and still gets hits for it on his website. Lieutenant Robert Winn was so inspired by the work he did as a dispatcher, that he eventually abandoned his place in volunteer firefighting to become a police officer. He's been a lieutenant for more than a decade.

"It's just one of those wonderful 'Albany' things," said Roger Green, who still talks about the storm with friends. "We have an October 1987 snowstorm -- and no one else does!"

For Stuart, it was a chance to see a once-in-a-lifetime meteorological event.

"Six point five inches of snow on October 4!" he said, shaking his head. "We may never see that again, certainly in my career, that's rare."