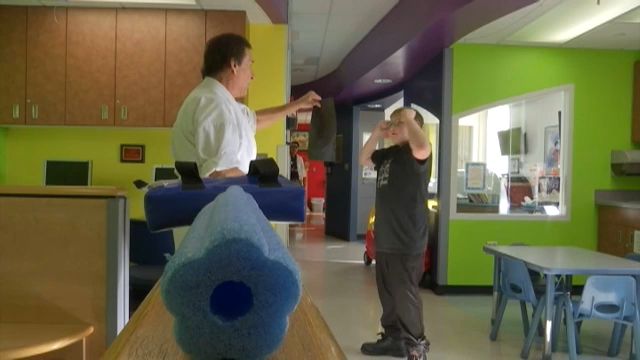 Despite being taught strikes and kicks, at the core of any karate instruction is how to avoid a fight. That is the philosophy at U.S. Budokai Karate of Clifton Park.

“It’s about learning how to defend yourself so you never have to fight,” said owner Russ Jarem.

But for those children already fighting for their lives, Jarem offers a special course.

Karate teaches you punches and kicks. Moves trainees are taught to only use as a last resort. For kids already in the fight of their lives, the skills can be their saving grace. In tomorrow’s Business Beat, meet Russ Jarem of U.S. Budokai Karate of Clifton Park. @SPECNewsAlbany pic.twitter.com/wd3uFmzaee

At least once a week for the past 12 years, Jarem steps out of his karate school to teach Brave Belts — a karate program for children undergoing cancer treatment and blood disorders at Albany Medical Center.

“I wasn’t able to really hang out with my friends due to my counts and stuff, so doing karate really helped me get my feelings out,” said Ryan Cowan, one of those Jarem trains.

Cowen met Jarem shortly after he was diagnosed with t-cell leukemia two years ago. The 13-year-old from Troy said the instruction helps him find strength during his weakest moments. For the last two months, his illness has been in remission.

Cowen's mother Jennifer said the instruction brought his strength back.

13-year-old Ryan Cowan’s leukemia is in remission. His mom says karate helped “give him his strength back.” In tomorrow’s @SPECNewsAlbany Business Beat - meet the instructor who, for 12 years, has helped pediatric cancer patients by teaching them martial arts. pic.twitter.com/yKS8t7rGWn

Brave Belts is made possible thanks to a grant from the Paul Robert Carey Quality of Life Fund. It is an alternative form of therapy that gives kids the strength to fight, and the power to heal.