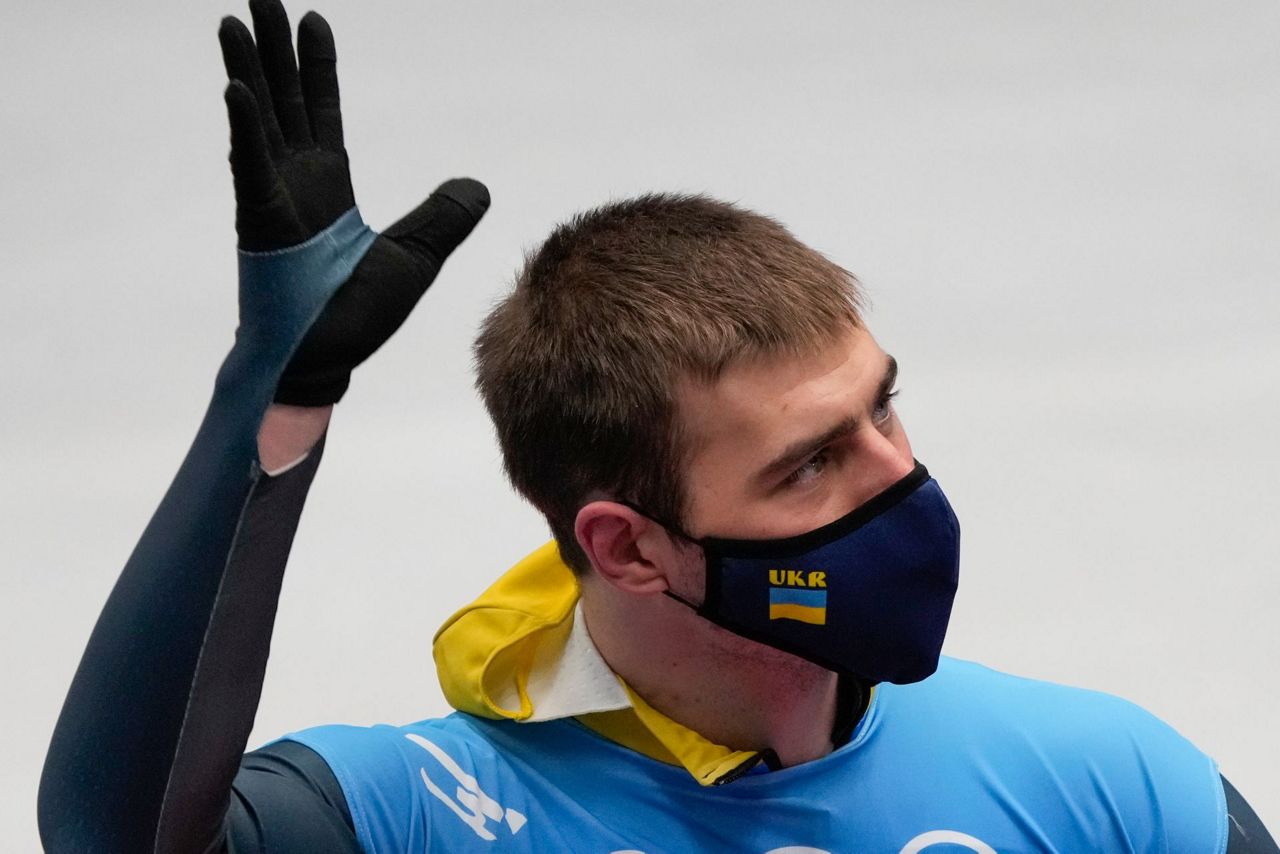 1 of 5
Vladyslav Heraskevych, of Ukraine, waves after finishing the men's skeleton run 4 at the 2022 Winter Olympics, Friday, Feb. 11, 2022, in the Yanqing district of Beijing. (AP Photo/Dmitri Lovetsky) 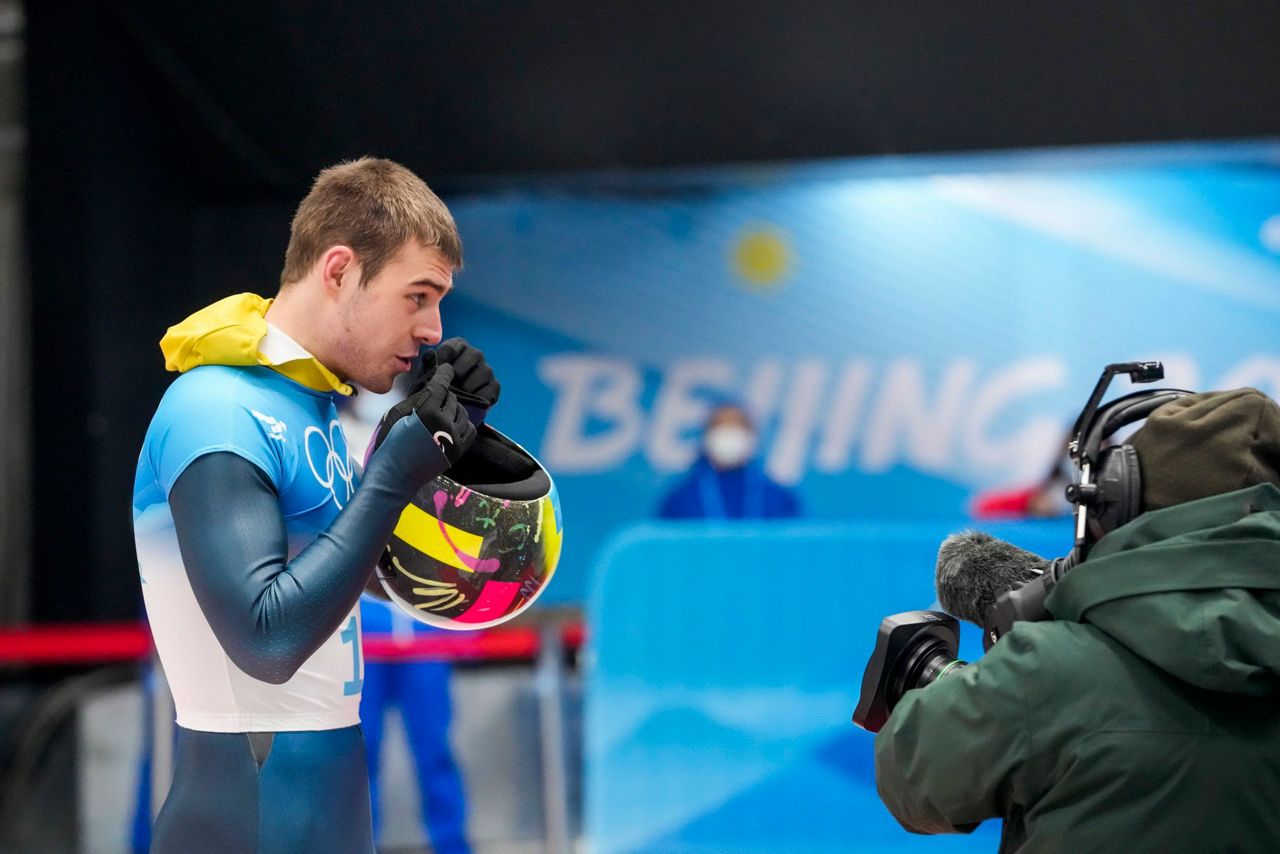 2 of 5
Vladyslav Heraskevych, of Ukraine, stands in the mixed zone after finishing the men's skeleton run 4 at the 2022 Winter Olympics, Friday, Feb. 11, 2022, in the Yanqing district of Beijing. (AP Photo/Mark Schiefelbein) 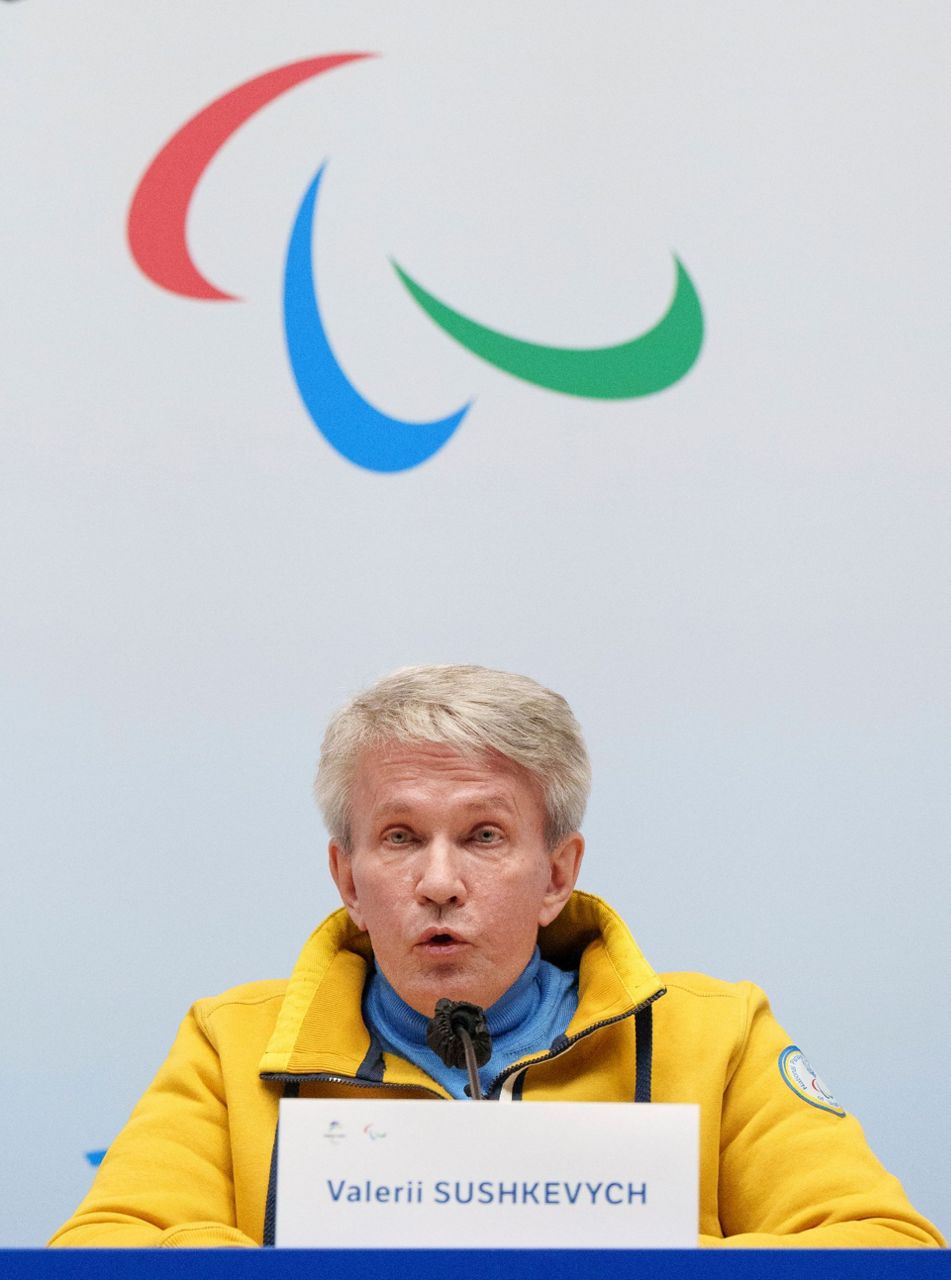 3 of 5
President of the Ukraine National Paralympic Committee Valerii Sushkevych speaks to the media following the IPC announcement that athletes from the Russian Paralympic Committee and Belarus, despite being called neutral, are no longer allowed to compete at the Beijing 2022 Winter Paralympic Games in Beijing, Thursday, March 3, 2022. (Joe Toth/OIS via AP) 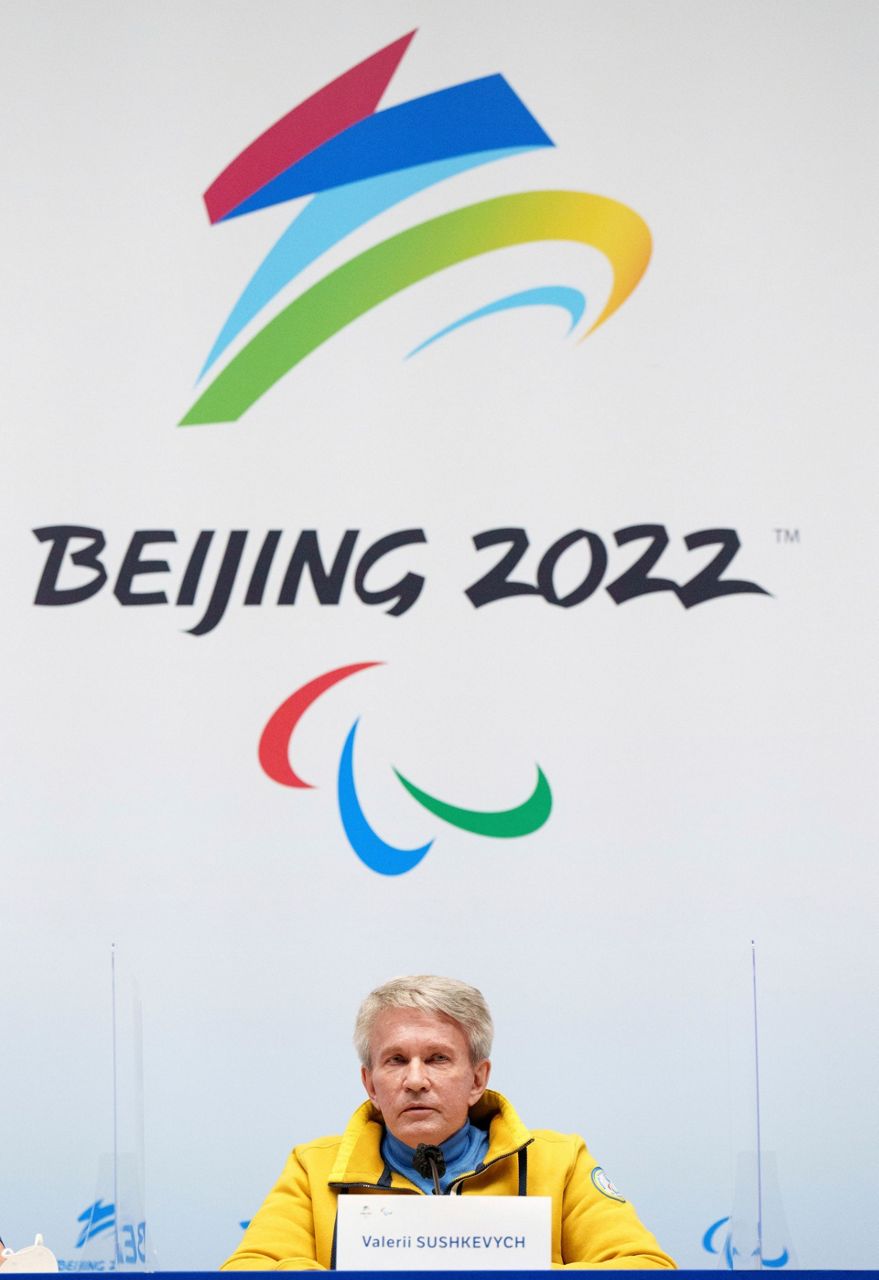 4 of 5
President of the Ukraine National Paralympic Committee Valerii Sushkevych speaks to the media following the IPC announcement that athletes from the Russian Paralympic Committee and Belarus, despite being called neutral, are no longer allowed to compete at the Beijing 2022 Winter Paralympic Games in Beijing, Thursday, March 3, 2022. (Joe Toth/OIS via AP) 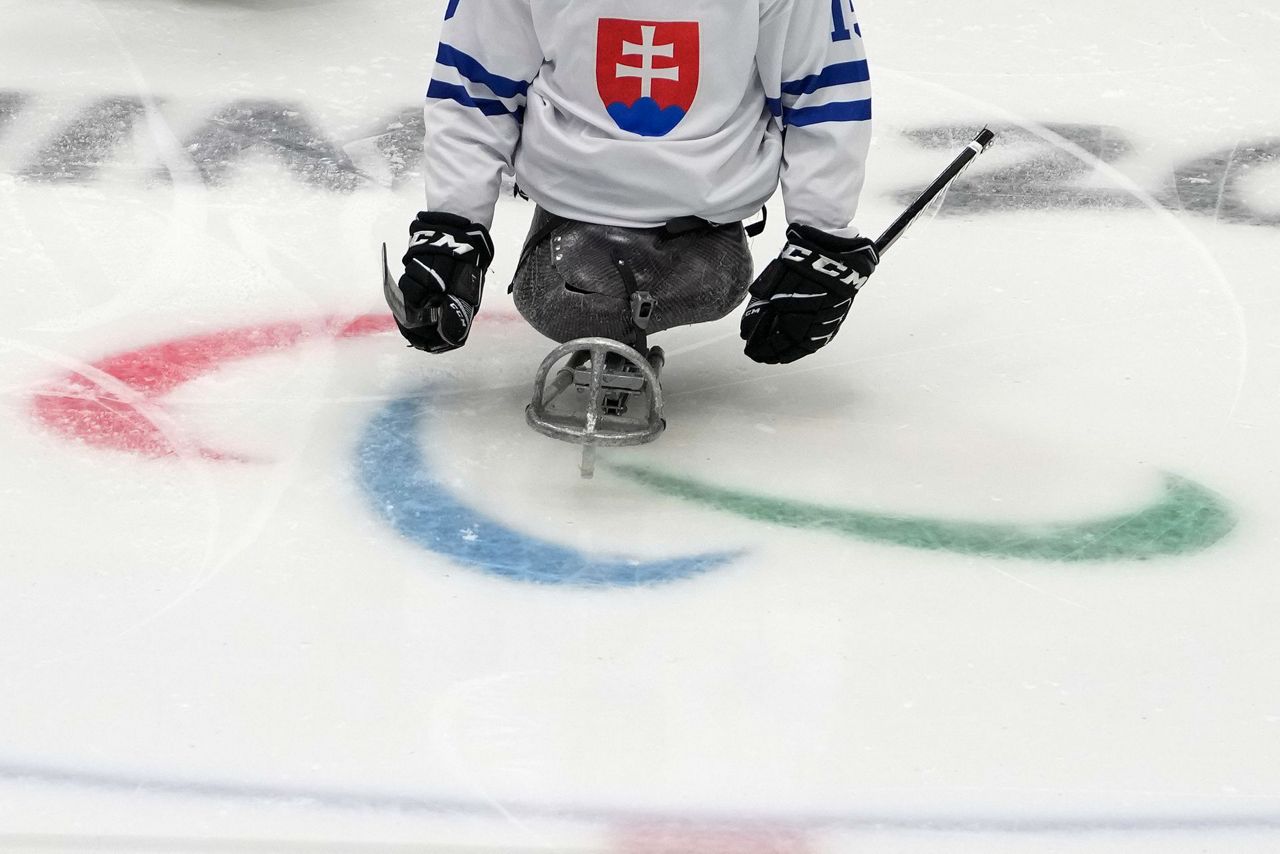 5 of 5
A Slovakian hockey player skates past the Paralympic logo during a practice session at the 2022 Winter Paralympics in Beijing, Thursday, March 3, 2022. In a stunning reversal, Russian and Belarusian athletes have been banned from the Winter Paralympic Games for their countries' roles in the war in Ukraine, the International Paralympic Committee said Thursday in Beijing. (AP Photo/Andy Wong)

Athletes force a change in ban of Russians at Paralympics

Athletes around the world cheered when leaders of the Paralympics booted Russia from the Games. The move, in many eyes, marked the high point of a growing movement by the people who actually deliver the show to find a greater voice in the Olympic world.

“It is because of the athletes,” said Ukrainian skeleton athlete Vladyslav Heraskevych, who has been living about 100 miles from Ukraine’s capital of Kyiv, fearful of an attack by Russian troops who invaded the country earlier this week.

The tipping point to the rapid turn of events Thursday was “a very, very volatile environment” in the athletes village in Beijing at the Paralympics, according to the head of that organization.

The International Paralympic Committee was faced with the very real possibility that athletes might simply pick up and go home before their Games start Friday. To prevent that, it made an abrupt about-face and chose to ban the Russian and Belarusian Paralympic teams that, previously, were being allowed to compete under a neutral flag.

“We did not think that entire delegations, or even teams within delegations, will withdraw, will boycott, will not participate,” IPC president Andrew Parsons said.

Rob Koehler, the head of the advocacy group Global Athlete, called the moment “a clear message to every single athlete about how valuable and important their voices are for change.”

Early in the week, a cadre of Ukrainian athletes aligned with Koehler's group to put out a statement condemning Russia's invasion and asking for an immediate ban of Russian and Belarusian athletes from the Olympics and Paralympics. The list of signers to this letter grew by the hour. It encompassed several hundred athletes, when adding the individuals who put their names on the letter to those who were members of the federations and athlete committees that signed on, as well.

It could have been more, but as the letter poignantly stated, “it has been a challenge to speak with all athletes from Ukraine as they are seeking safety in bomb shelters.”

The International Olympic Committee signaled that it heard the message. It urged all federations to prohibit athletes from those countries from competing. Many took heed of that advice — including ice skating, skiing, soccer, hockey, basketball and others.

But the Paralympics didn't do a ban, explaining it would never hold up in court because of the rulebook. The IOC, with the Olympics in the rearview mirror, also passed on a ban itself.

That decision cast a different light on a New York Times report that China had specifically asked Russia to hold off on any invasion until the Olympics were over. The countries are allies — their presidents held a summit the day after the opening ceremony and declared their strategic partnership had “no limits." It was no shock that China didn't want the start of a war to tarnish its massive sports spectacle.

But the Paralympics bring another 600-plus athletes to Beijing to compete over 10 days of skiing, skating and sledding. It is one of the largest gathering of international athletes this side of the Olympics. The removal of Russia's flag, without the removal of the country's athletes was, Parsons said, the “harshest possible punishment we can hand down within our constitution and the current IPC rules.”

Those rules, however, took a backseat to reality.

The Latvian and South Korean curling teams said they wouldn't take the ice against Russia for an early round match. Other athletes were considering leaving. The IPC could no longer ignore that possibility.

“It is abundantly clear that athletes forced this decision, not sport leaders,” said Ali Jawad, a four-time Paralympian who is on the board of Global Athlete.

The thought of walking away is the most drastic possible option for athletes who spend their lives training for a day or two of glory at the biggest spectacle in sports. For decades, none have willingly made that choice.

The thought of competing in China, with its record of human-rights abuses, was stomach-turning to many Olympians. But they all chose to go, in large part because they knew there was no groundswell that would follow them out the door. Boycotting by themselves, they said, would grab headlines for a day or two, but then the world would simply move on.

Athletes posed a bigger threat than that at the Paras. It was the latest, most striking show of power in a movement that has included victories in the fight over Olympic rules on marketing and demonstrations, a flap over women wearing bikini bottoms for beach handball, pay for women's soccer players and more.

“The list goes on and on, and it shows that when athletes say ‘Things are changing, and they’re changing today,' that it really can happen,” Koehler said.

Russia is likely to take this case to the Court of Arbitration for Sport. CAS, the IOC, World Athletics, the World Anti-Doping Agency and dozens more in this long “alphabet soup” of sports organizations have a long history of contorting the rulebooks of international sports to make them say whatever they want.

One example: While, before the war broke out, Russia remained largely eligible in most sports despite eight years of rule-breaking and cover-ups, it was still considered a rogue state in track and field.

It is also, for the time being, persona non grata at the Paralympics. The credit for that goes to a growing group of athletes who wouldn't accept any other option.