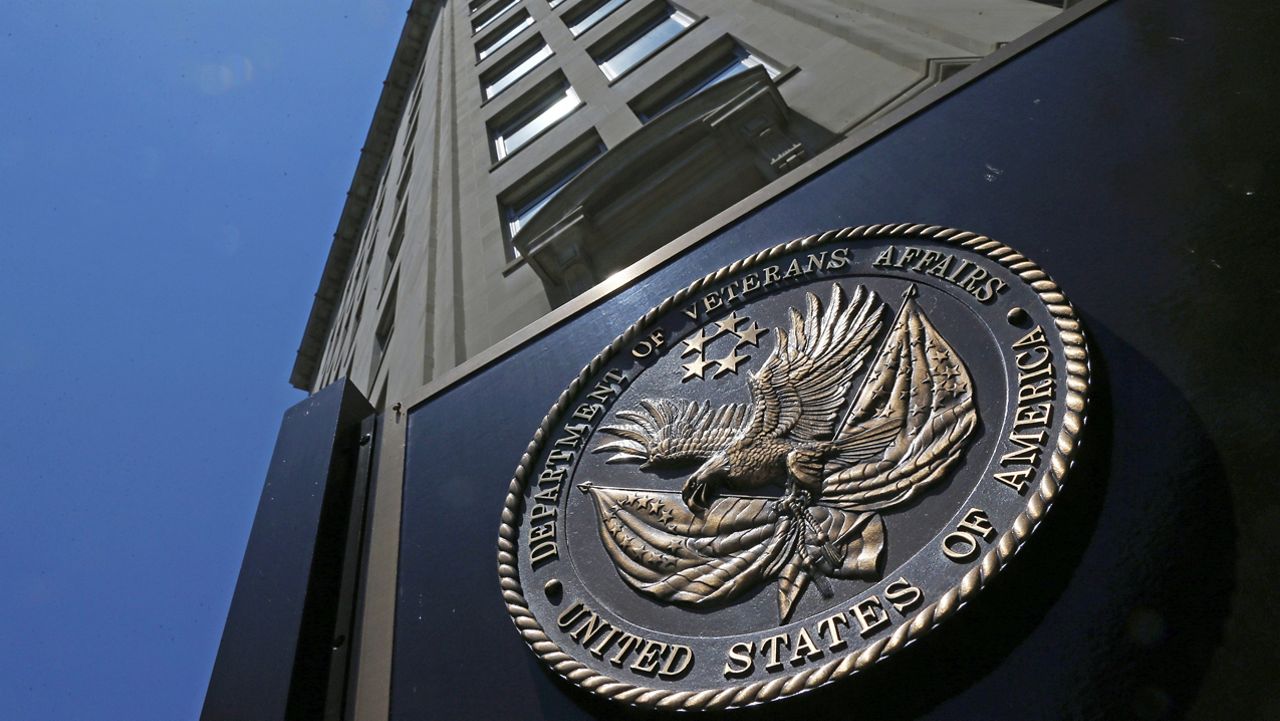 FILE - In this June 21, 2013, file photo, the seal affixed to the front of the Department of Veterans Affairs building in Washington. The Department of Veterans Affairs is warning of a rapidly growing backlog for veterans who seek to appeal decisions involving disability benefits, saying it will need much more staff even as money remains in question due to a tightening Trump administration budget. (AP Photo/Charles Dharapak, File)

The Department of Veterans Affairs has been trying to chip away at a massive backlog of veterans' disability claims since the problem gained national attention nine years ago. At the time, the backlog reached more than 600,000 cases due to a flood of new claims from veterans of the Iraq and Afghanistan wars.

The VA has been able to significantly reduce the queue to about 150,000, after it grew again from 70,000 to 250,000 during the COVID-19 pandemic. But sources at the VA told Spectrum News the process is not going as quickly as it should.

Critics say the problem started when the Veterans Benefits Administration, a division of the Department of Veterans Affairs, changed its hiring practices.

“I believe it was in February 2020, when the then board chairman, Cheryl Mason, hired somebody for the very first time with no veterans law experience,“ Doug Massey, the president of the American Federation of Government Employees Local 17, which represents VA employees said. "I got a deluge of emails from attorneys and also from the board members as well who are upset about this."

In adding more judges to resolve claims, Massey said the VA eliminated a long-standing requirement that Veterans Law Judges have several years of prior experience in veteran benefits law. An anonymous whistleblower shared similar concerns in a six-page letter obtained by Spectrum News and sent to the law firm of Chisholm Chisholm & Kilpatrick LTD. The letter claims that 85% of the new judges hired since the summer of 2021 have no experience in VA benefits law.

“We've known about the backlogs for years and years, I have nothing but respect for the overwhelming majority of people who work at both the Board of Veterans Appeals and at VA," Zachary M. Stolz, a partner at law firm Chisholm Chisholm & Kilpatrick LTD, told Spectrum News.

"I know many of them, many of them I count as personal friends," Stolz added. "I know that they get up to serve veterans and their families every day but regardless, not everybody is producing at the same rate."

The press secretary at the Department of Veterans Affairs told Spectrum News it was alerted to the letter but declined to comment on it or the allegations made.

“VA was alerted to this letter posted on the CCK website. However, we are uncertain about the authenticity or source of this anonymous letter. From the information in the anonymous letter and on the CCK website where it was posted, we note that both appear to reference active and pending litigation between the CCK law firm and VA,” the VA press secretary told Spectrum News in a statement. "Accordingly, it would be inappropriate for us to publicly comment further even if/when we ascertain more."

“I would extrapolate that [the letter] is coming from a person who is placed within the board either as an attorney or as a veteran's law judge, who is concerned about the fact that many people at the Board of Veterans Appeals are working extremely hard. But there may be a number of people who either through lack of experience or lack of guidance or lack of leadership are not doing the job that they are there to do,” Stolz said of the anonymous letter.

Massey told Spectrum News that the department has other means of getting the same data in the anonymous letter. He claims that he has data corroborating concerns in the letter and that he's already provided it to VA management with no response. He’s also sent a letter to VA Secretary Denis McDonough about these problems but hasn’t heard back.

“On average, a board member should produce about sign about between 15 and 20 decisions per week. Now, the data we have during this period is from October 1 to July 31. They were averaging about maybe four decisions a week. I also received data from a board member saying that if these inexperienced people had not been hired and put in these positions, we'd be 2,000 decisions ahead of where we are right now,” Massey added.

When asked to respond to Massey’s concern, the Department of Veterans Affairs said, “We have nothing further to add to our initial statement.”

“Anytime you have an issue that directly affects veterans affects their ability to get the assistance that they are due, frankly, for their services country. That's a big deal. And I'm concerned that the administration doesn't appear to be taking it seriously,” Hawley said.

The VA has previously said it's on track to meet its goal of reducing the backlog to 100,000 by 2024 but a new influx of cases is expected following the passage of legislation this summer. That legislation makes millions more veterans eligible for compensation for exposure to toxic burn pits during their service.