Supporters of President Donald Trump are seen ahead of a town hall put on by Democratic Rep. Anthony Brindisi (NY-22) in New Hartford on Thursday Briana Smith Photo

In Era of Trump, All Politics, It Seems, Is National

Will that bridge get fixed? Will my kid’s school offer advanced placement courses? Will this area ever recover the jobs it lost?

Those are questions you’d often hear at a town hall meeting. And often, you still do. But increasingly they’re getting replaced by some variations of this query: Should President Donald Trump be impeached? 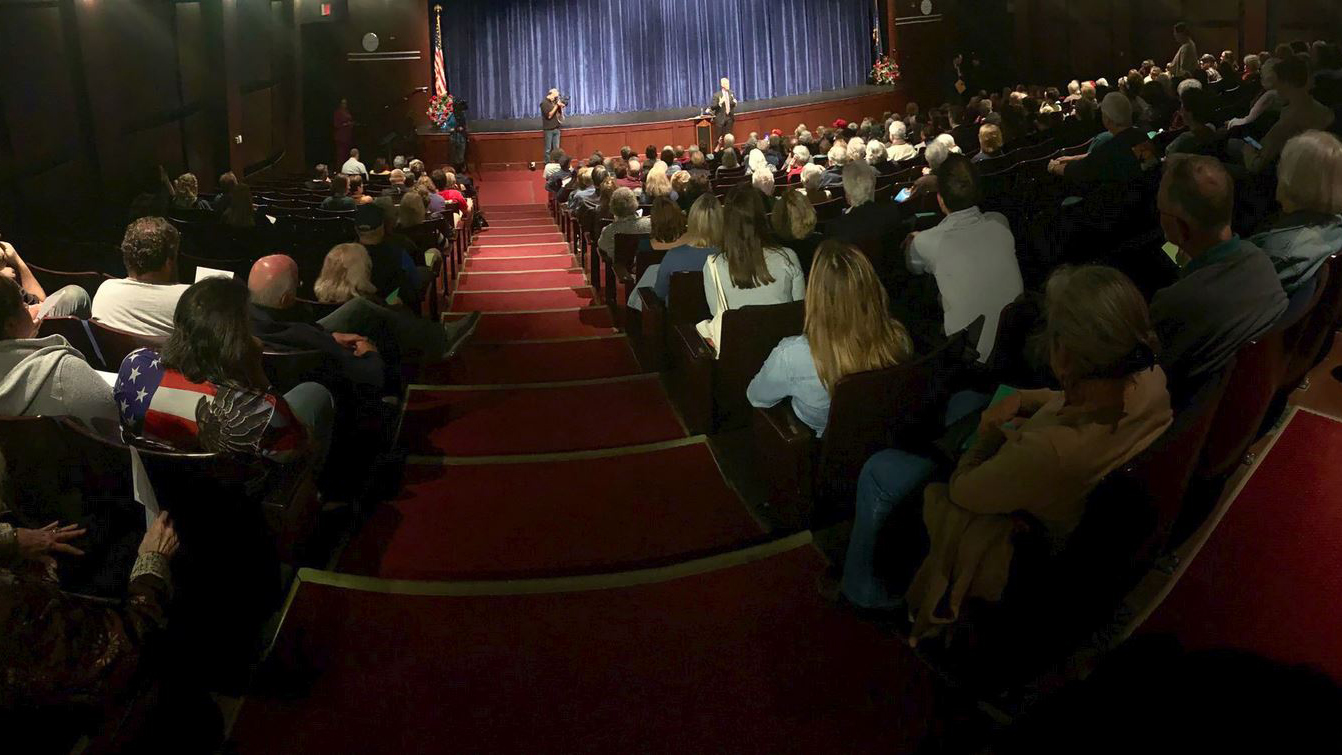 Rep. Anthony Brindisi (NY-22) holds a crowded town hall on Thursday, where he was met with questions on impeachment.

Local-level elections from town board to the House of Representatives are increasingly being nationalized. Voters, perhaps those who have split their tickets in the past between Republicans and Democrats, are increasingly less likely to do so, especially in presidential election years.

Passions are, of course, inflamed by Trump.

In downtown Glens Falls, a small city an hour north of Albany that has often drawn comparisons to George Bailey’s fictional upstate community Bedford Falls in “It’s A Wonderful Life” has over the last several weekends become subsumed by a pro-Trump demonstration. The groups supporting the president have factionalized, but one demonstrator has appeared to threaten a local newspaper reporter and harangue passers-by with a bullhorn.

In a way, it’s a perfect analogy for what’s happening nationally: One man’s voice amplified above all others.

Town hall-style events have turned into forums for local House members to field questions about the latest Trump-related outrage. It was so at Republican Rep. Elise Stefanik’s Johnstown event on Thursday and for Democratic Rep. Anthony Brindisi’s forum held the same day in New Hartford.

.@RepStefanik, speaking today before a 'Coffee With Your Congressman' town hall event in Johnstown, says the impeachment inquiry surrounding President Donald Trump has led to a "lurching halt" in policymaking. pic.twitter.com/JomkMkplXL

I’m not absolved of anything here: I, along with the reporters in the room before the event began, asked Stefanik about Trump’s push to have foreign governments investigate Joe Biden and whether that was appropriate behavior. It’s what, I assume, viewers expect me to do.

It’s important to get both Stefanik and Brindisi on the record about a consequential issue like impeachment. But it’s also a busy world, and a lot more happening out there. The first question Stefanik got from an attendee at the town hall wasn’t about impeachment, but about an opioid bill she voted on.

Donald Trump supporters ahead of @RepBrindisi town hall at New Hartford High School. They want the congressman to oppose the impeachment inquiry against Trump. Brindisi is taking a cautious approach and waiting to hear more facts. I’ll have more details coming up on @SPECNewsCNY. pic.twitter.com/utJ4yX0Fky

Rep. Alexandria Ocasio-Cortez, who has shot to national stardom, wanted to talk about local issues at her town hall, which became hijacked by a woman from a political cult who ranted about eating babies to make an anti-climate change point through performance art.

For people who are concerned about schools, taxes and jobs, it’s easy to see how they would want to turn off from politics, especially when it’s being treated like professional wrestling.

At the same time, local media has taken a blow. Newspapers like The Washington Post and The New York Times are global in their footprint and can produce seemingly endless digital subscribers to make up for the cutbacks in print subscribers and advertising.

Your local paper, perhaps owned by a parent company that’s controlled by a nameless hedge fund you’ve never heard of, does not have that luxury of scale. People are still consuming news, but they’re consuming it in an increasingly cathartic fashion. A dispatch from a common council meeting about a plan to fix a sidewalk simply can’t garner the same level of scale.

When news is filtered through a national lens, amplified on national cable news opinion shows, there leaves little nuance for what’s happening on the local level. Your Republican mayor is no longer just your mayor, but an unredeemable mini-Trump. Your Democratic councilman isn’t a Democrat, but someone in league with the socialists, and so on.

With local outlets fading, Facebook fills the void. Treated as direct portal to the internet by many, outrage quickly rises to the top of feeds and headlines — not the content of the story — are what users react to now.

Rep. Nita Lowey, who announced her retirement on Thursday, has been in Congress almost as long as I’ve been alive. She was my district’s representative growing up. She would appear at Little League awards ceremonies and at school functions, once sitting next to me in the cafeteria to talk about lunch options (I told her we needed more pizza days).

Lowey’s retirement immediately sparked discussion that Chelsea Clinton would run for the seat. If so, it’d be a national story.