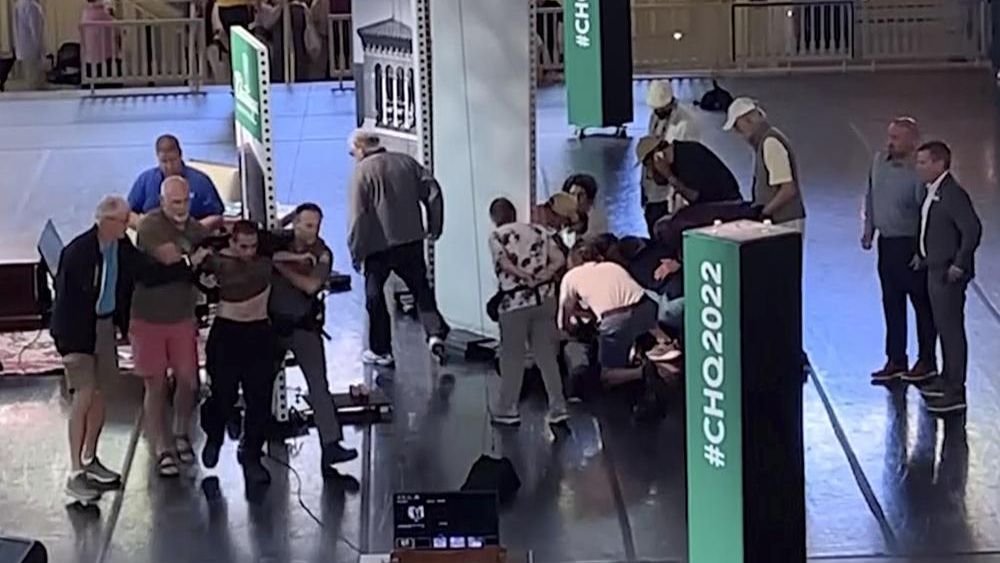 This still image from video shows Hadi Matar, 24, of Fairview, N.J., at left, being escorted from the stage as people tend to author Salman Rushdie, center right, at the Chautauqua Institution, in Chautauqua, N.Y., Friday, Aug. 12, 2022. (AP Photo)

Salman Rushdie remained hospitalized Saturday after suffering serious injuries in a stabbing attack as praise poured in for him from the West but he was disparaged in Iran.

Rushdie, 75, suffered a damaged liver, severed nerves in an arm and an eye, and was on a ventilator, his agent Andrew Wylie said Friday evening. Rushdie was likely to lose the injured eye.

Police identified the suspect as Hadi Matar, 24. He was arrested after the attack at the Chautauqua Institution, a nonprofit education and retreat center where Rushdie was scheduled to speak. Matar, of Fairview, New Jersey, was born in the United States to Lebanese parents who emigrated from Yaroun, a border village in southern Lebanon, Mayor Ali Tehfe told The Associated Press.

Matar entered a not-guilty plea in a New York court on Saturday on charges of attempted murder and assault. An attorney for Matar entered the plea on his behalf during an arraignment hearing. Matar appeared in court wearing a black and white jumpsuit and a white face mask. His hands were cuffed in front of him. He has been remanded to the Chautauqua County Jail without bail, according to the Chautauqua County District Attorney's Office.

"Immediately after the attack, I was on scene to view the evidence in order to determine what needed to be further developed and preserved for prosecution. We are working closely with State Police, our local police agencies and federal law enforcement partners to fully develop the evidence. We have been in touch with our counterparts in the State of New Jersey where the attacker is from to share information and assist them in helping us to better understand the planning and preparation which preceded the attack so that we and the different agencies involved can determine what, if any, additional charges should be asserted. This is the very early stage of what will invariably be a protracted legal process. We will try to be as transparent as we can without compromising the case," DA Schmidt said.

State police say they are still working to determine a motive for the attack. They believe Matar was working alone, but they haven't ruled anything out as of now.

An Associated Press reporter witnessed a man confront Rushdie on stage and punch or stab him 10 to 15 times as he was being introduced. The 75-year-old author was pushed or fell to the floor, and Matar was arrested.

Dr. Martin Haskell, a physician who was among those who rushed to help, described Rushdie’s wounds as “serious but recoverable.”

State police said Rushdie was stabbed in the neck and was flown to a hospital. Event moderator Henry Reese, a co-founder of an organization that offers residencies to writers facing persecution, was also attacked and suffered a minor head injury, police said. He and Rushdie were due to discuss the United States as a refuge for writers and other artists in exile. According to officials, Rushdie is currently undergoing surgery and Reese is also being treated for their injuries.

Rabbi Charles Savenor was among the roughly 2,500 people in the audience. Amid gasps, spectators were ushered out of the outdoor amphitheater.

The assailant ran onto the platform “and started pounding on Mr. Rushdie. At first you’re like, ‘What’s going on?’ And then it became abundantly clear in a few seconds that he was being beaten,” Savenor said. He said the attack lasted about 20 seconds.

Our thoughts are with Salman & his loved ones following this horrific event. I have directed State Police to further assist however needed in the investigation.

Another spectator, Kathleen Jones, said the attacker was dressed in black, with a black mask.

“We thought perhaps it was part of a stunt to show that there’s still a lot of controversy around this author. But it became evident in a few seconds” that it wasn’t, she said.

A bloodied Rushdie was quickly surrounded by a small group of people who held up his legs, presumably to send more blood to his chest.

Rushdie has been a prominent spokesman for free expression and liberal causes. He is a former president of PEN America, which said it was “reeling from shock and horror” at the attack.

“We can think of no comparable incident of a public violent attack on a literary writer on American soil,” CEO Suzanne Nossel said in a statement.

Rushdie “has been targeted for his words for decades but has never flinched nor faltered,” she added.

Iran’s theocratic government and its state-run media assigned no rationale for the assault. In Tehran, some Iranians interviewed by the AP praised the attack on an author they believe tarnished the Islamic faith, while others worried it would further isolate their country.

This attack is shocking and appalling. It is an attack on freedom of speech and thought, which are two bedrock values of our country and of the Chautauqua Institution. I hope Mr. Rushdie quickly and fully recovers and the perpetrator experiences full accountability and justice. https://t.co/44q1DomFsu

A bounty of over $3 million has also been offered for anyone who kills Rushdie.

He has said he is proud of his fight for freedom of expression, saying in a 2012 talk in New York that terrorism is really the art of fear.

“The only way you can defeat it is by deciding not to be afraid,” he said.

Iran’s government has long since distanced itself from Khomeini’s decree, but anti-Rushdie sentiment has lingered. The Index on Censorship, an organization promoting free expression, said money was raised to boost the reward for his killing as recently as 2016, underscoring that the fatwa for his death still stands.

In 2012, Rushdie published a memoir, “Joseph Anton,” about the fatwa. The title came from the pseudonym Rushdie had used while in hiding.

Rushdie rose to prominence with his Booker Prize-winning 1981 novel “Midnight’s Children,” but his name became known around the world after “The Satanic Verses.”

Our thoughts are with Salman Rushdie’s family & friends as we pull for his full & quick recovery after he was attacked on stage at an event in Chautauqua County. We must hold the perpetrator accountable to the fullest extent of the law & ensure he remains in custody.

The stabbing reverberated from the tranquil town of Chautauqua to the United Nations, which issued a statement expressing U.N. Secretary-General Antonio Guterres’ horror and stressing that free expression and opinion should not be met with violence.

Iran’s mission to the United Nations did not immediately respond to a request for comment on Friday’s attack, which led an evening news bulletin on Iranian state television.

Rushdie has been a prominent spokesman for free expression and liberal causes, and the literary world recoiled at what Ian McEwan, a novelist and Rushdie’s friend, described as “an assault on freedom of thought and speech.”

“Salman has been an inspirational defender of persecuted writers and journalists across the world,” McEwan said in a statement. “He is a fiery and generous spirit, a man of immense talent and courage and he will not be deterred.”

The Chautauqua Institution, about 55 miles southwest of Buffalo in a rural corner of New York, has served for more than a century as a place for reflection and spiritual guidance. Visitors don’t pass through metal detectors or undergo bag checks. Most people leave the doors to their century-old cottages unlocked at night.

A statement regarding the incident from the institution reads, "The Chautauqua Institution is currently coordinating with law enforcement and emergency officials on a public response following today's attack of Salman Rushdie on the Chautauqua Amphitheater stage. We will provide more details as we know them."

Police said a state trooper was assigned to Rushdie’s lecture.

The Chautauqua center is known for its summertime lecture series, where Rushdie has spoken before. Speakers address a different topic each week. Rushdie and moderator Henry Reese were set to discuss “the United States as asylum for writers and other artists in exile and as a home for freedom of creative expression.”

The American Jewish Committee released a statement condemning the attack.

"If the attack on Salman Rushdie is connected to the Iranian "fatwa" calling for his execution, it is one more link in the chain of murder and attempted murder that originates in Tehran under the mullahs. For decades, we’ve seen hard evidence of Iran’s sponsorship of terror, from the U.S. Marine barracks in Beirut to the Israeli Embassy and AMIA bombings in Buenos Aires, the Mykonos restaurant killings in Berlin, and just in recent days the thwarted attack against Iranian women's rights activist Masih Alinejad, and the assassination plot against former National Security Adviser John Bolton. Now, Salman Rushdie has fallen victim to the violence and intolerance Iran inspires and encourages. We must all condemn egregious attacks like this, as we wish him a swift recovery."

"On behalf of all Chautauqua County residents, I extend my thoughts and prayers to the family and friends of Salman Rushdie. The small tranquil community of the Chautauqua Institution has been shaken to its core by an act of violence, which has reverberated across Chautauqua County and Western New York. It is disappointing that we live in a society where we cannot listen to the differences of others, especially in a place like the Institution where thinkers and problem solvers from around the world come to share their stories. I thank all of the emergency and law enforcement agencies who have done a tremendous job in responding to this horrific event. It is through their quick response that they were able to mitigate the situation and capture the alleged assailant."

This is an ongoing criminal investigation.

This is a developing story. Stay tuned to Spectrum News 1 for more details.