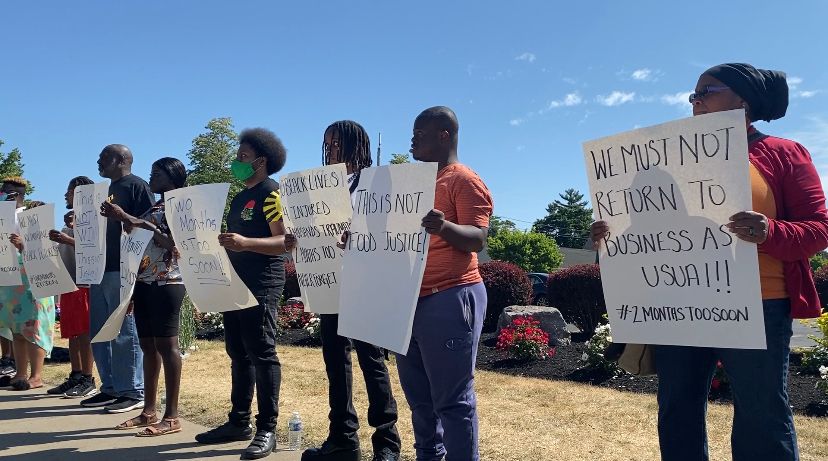 BUFFALO, N.Y. —  Some residents in East Buffalo are filled with joy that their only grocery store has returned after being closed by tragedy. Others say that unhealed wounds have been reopened along with Jefferson Avenue’s Tops supermarket.

Protesters showed up for a second day Saturday in opposition to the grocer’s return on July 15, but they are not fighting against residents who wanted to see the store reopen. They say they’re fighting for and alongside them.

“The media has slanted this as ‘a community divided’, ‘us against them.’ We want the same things," said Buffalo native Jerome R. Wright, who led the protest with words on how he believes the Tops reopening is more detrimental than helpful to the community. This community is agreeable about one thing: that one store is not enough, it’s never been enough and that tragedy, that massacre exposed why it wasn’t enough and exacerbated the concerns in this community.”

Some say that two months after the May 14 mass shooting was too soon to reopen a store that is still a memorial site and that there were missed opportunities to bring new businesses into the area.

“My suggestion is for it to be closed,” protester and East Buffalo resident Sarah Jacobs said. “But I know there’s people that need it which I understand that. But we’re not going to make it as an option because they could do other stuff. They could open up different stores, they could do all different things. But they’re just making it as Tops just being the only option and I don’t like that idea.”

Even with Tops back, food insecurity remains an issue in the area, especially for some residents too traumatized to ever set foot in the store again.

“We are being held hostage by inhumane decisions, options," said Jalonda Hill, activist and founder of Colored Girls Bike Too. "So, it’s either that we choose to go back into a store where we’re walking on the blood of our elders, or it’s that we remain in a community where we’re experiencing food apartheid.”

Demonstrators also argued that empty lots and abandoned properties around the East Side should be homes for new establishments. They say that since local officials are not making it happen, they will.

“So we got the land, we got the space, and now we got the people who are trying to imagine that, dream it and actually do it. We want results,” said activist Anthony X, who pointed out three empty lots near Tops where a new supermarket could have been built instead.

From these protests will come community meetings where residents can envision possibilities together, as activists take action to provide more options for the community. Meetings that are planned to begin in August will bring in community members, urban planners and architects who will work together to turn dreams into reality.

“I think one of the things about poverty is that poverty robs people of being dreamers, of being visionaries, and by calling a public meeting, you give people an opportunity to dream and to be visionary," Hill said. "Our communities don’t have to look like this. This could look like Wakanda if we wanted it to, but we have to demand for that, and so that’s why we’re out here protesting today, to encourage our people to say, ‘We can demand more.’”

Activists at the protest say those community meetings should start happening in August and will include East Buffalo residents, urban planners and architects who can help envision options for more grocery stores and businesses in the area.

The newly-renovated store aims to address security concerns that residents had before returning to shop, with wider aisles, better sight lines, increased professional security, an emergency evacuation alarm system and an emergency exit.

On Friday, the Buffalo Police Department said it's installing new surveillance cameras outside of the Tops. The new cameras will oversee the parking lot, as well as intersections at Landon and Riley streets.

Mayor Byron Brown says it’s about peace of mind for shoppers and safety for the community.