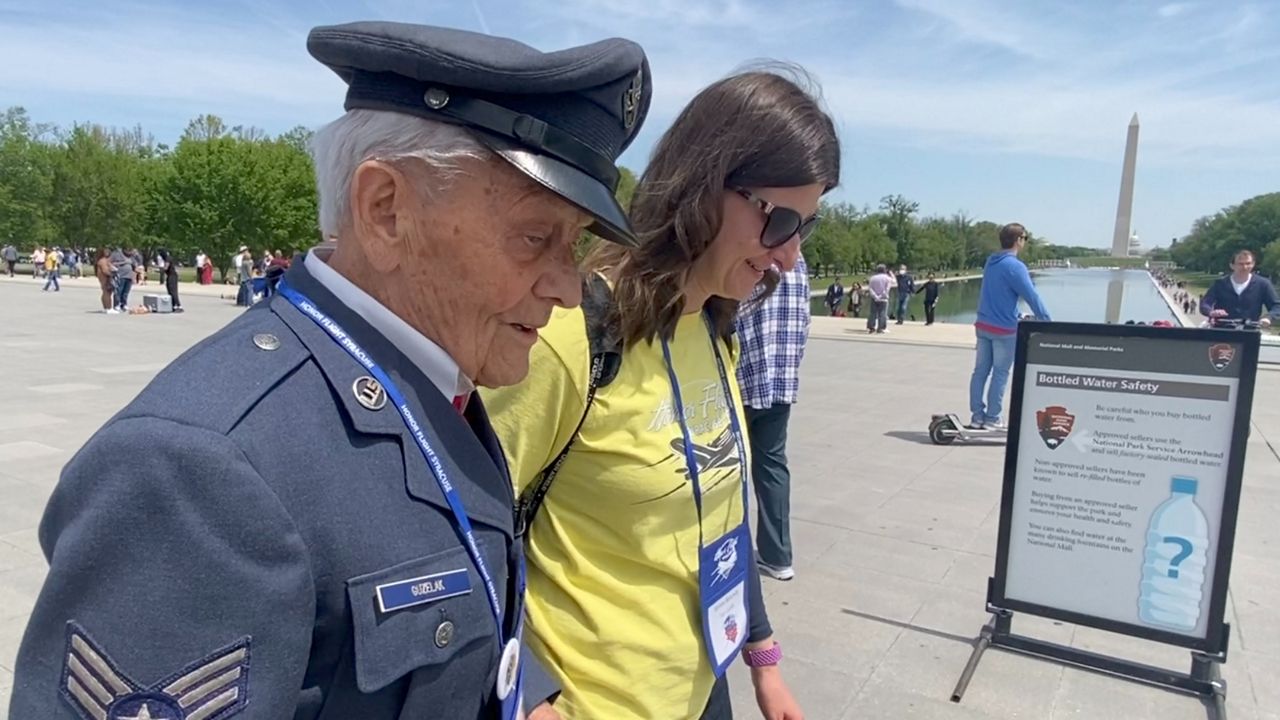 There are plenty of smiles and war stories between the veterans on Honor Flights from Buffalo to Syracuse to California. There’s a feeling of accomplishment when these vets get home from battle with hopes that what they fought for stands the test of time.

Air Force veteran Andrij Guzelak was born in Ukraine. He is visiting Washington, D.C., for the first time, but his mind is elsewhere.

“It's beyond believing that I can survive World War II, survive the Korean War, and now seeing that something like this, it's horrible, it's horrible,” he said.

On a day that is meant to celebrate his and others' service, there's painful reminders of what it's meant over the years.

“We can speak our minds, you know, in United States,” said Guzelak. “I am looking at the situation now. It's impossible to believe that anything like that could happen now. In the days that we live now.”

“It's a big honor for me to be here and meet some of the comrades that are still alive,” Guzelak said. “I feel sorry for the ones that lost their lives.”

Eyes fixed on the ponchoed servicemen brings back personal pain.

“When I was over there, I experience a couple of winters that they were terrible over there,” he said. “I even have a frost on my toes that I'm losing.”

“If I have to go through what I went through already, I'll do it,” he said. “I'll do it. Anytime over again. Because I survive.”

Guzelak's granddaughter Chelsey Fruscullo has spent the recent months and most of the day talking about his experience.

“It's much more emotional than I thought I would be,” she said. “It's also very full circle. My grandfather's very, very proud of his military experience. And even though he had just gone to America, he was very proud and eager to serve his new country. That's actually how he got his citizenship was by going over to fight.”

As his guardian on the Honor Flight, she's been able to enjoy seeing her grandfather connect and commiserate.

“Being with different generations and bats and having them young people in the military here come up to him and say thank you so much for your service,” she said. “It just really brings it sort of all together.”

A day celebrating Guzelak and his fellow veterans is touching, but the family said it can't quite be the relief they hope for on this flight.

“How after this generation said goodbye to that time, how are we doing this all over again,” Chelsey asked. “You can't think about not without thinking about the past there to intertwine and so many things that broke hearts before repeating again.”

“Ukrainians, they are not fighting just for themselves. They fighting for everybody else in Europe,” added Guzelak. “If you lose Ukraine now, who's going to be next?”

Guzelak spent his time in the Air Force after being drafted, but embraced his service. He knows there are servicemen and women who, if given the chance, aren’t hesitating to help in the Ukrainian war effort.