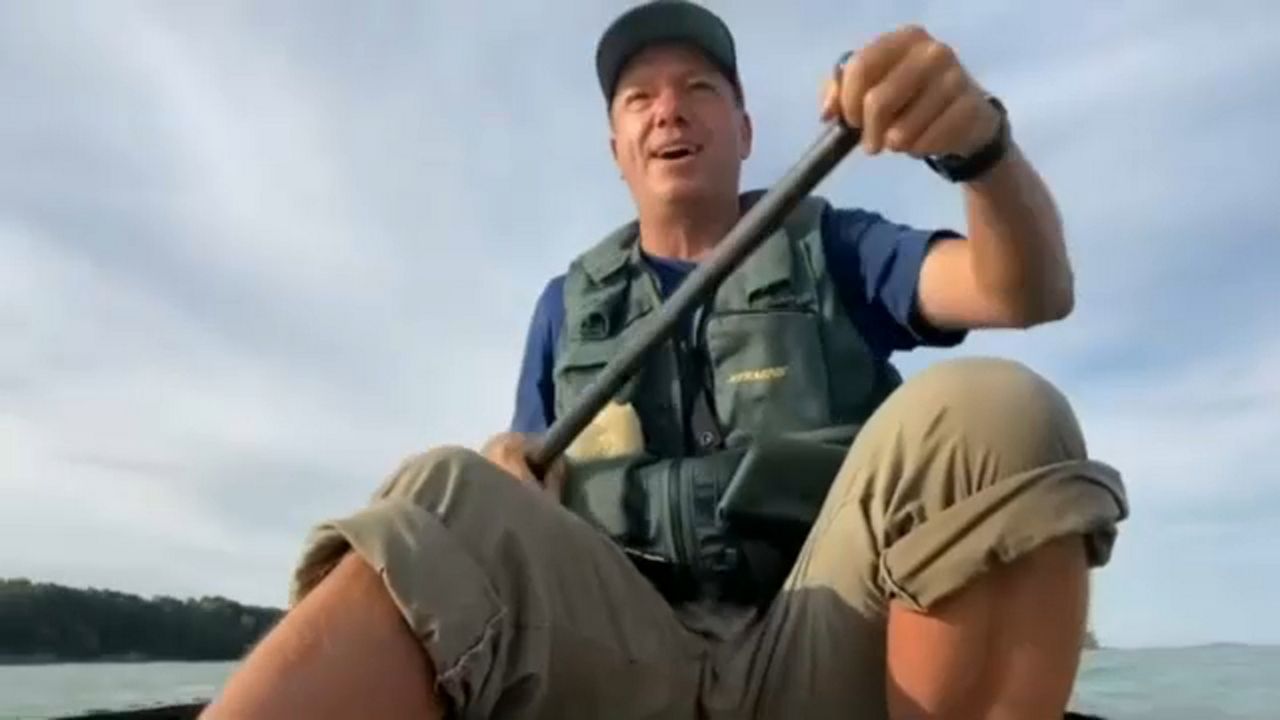 Adventurer from the West Coast paddling his way across New York

On a recent, relatively tranquil morning along Barcelona Harbor Beach in Westfield, Neal Moore of Los Angeles began the next leg of his cross-country journey with his canoe.

"This is my first experience on Lake Erie,” he said. “I'm looking to explore how the rivers connect, right the way, from sea to shining sea. As well as how we as Americans connect."

Neal started his trip in Oregon back on Feb. 9, 2020 and has already traveled a continuous route through the Gulf of Mexico, up to the Great Lakes.

It’s all part of his plan to connect 22 rivers and waterways until he reaches his final destination of New York Harbor, fed by the Hudson River where he'll circle the Statue of Liberty.

"What you see here is all my lifelong belongings,” he said. “And so, I'm slowly but surely making my way across the landscape with the canoe and everything that I own."

Everything he owns is all strategically packed in duffel bags.

"Snacks for the road," he said.

After the canoe is packed, and his cargo secured, he says goodbye to his friends he's made along the way.

They’re friends who are invited to sign the inside of the canoe alongside all the other well-wishers, before Neal pushes his way into the water.

"I've been looking forward to the Great Lakes for this entire journey,” he said. “To be here on Lake Erie, to be in New York. The history here, the expanse of this waterway, just absolutely incredible. So I could not be happier."

Together with Carol, an escort from the Chautauqua Lake Rowing Association, Neal was on his way, rowing through the waters of Lake Erie on his way to the pier in Dunkirk.

But just a few miles out, Neal took video of what he described as good size roller, or waves forming and had to change course as a precaution.

"I'm cutting out into the lake to make my way around their formation,” he says.

But as Neal explains, the winds got stronger, the waves bigger, and both Neal and his escort were in danger, as they tried to paddle their way to safety.

The two were able to make their way to a pebbled beach several miles from Dunkirk, but not before Neal's canoe started filling up with water, as he was pushed out, while his escort was racing to help remove his gear.

A few hours later, Neal's friends from Dunkirk drove him and his canoe to the rainy and windy pier.

"When push comes to shove on an expedition like this, you cannot freak out,” he said. “You basically have to remain calm and look at your best possible options."

From Dunkirk, he launched from Wilkinson Pointe in Buffalo to the small boat harbor.

He's now headed down the Erie Canal and expects to reach New York City on Dec. 14.