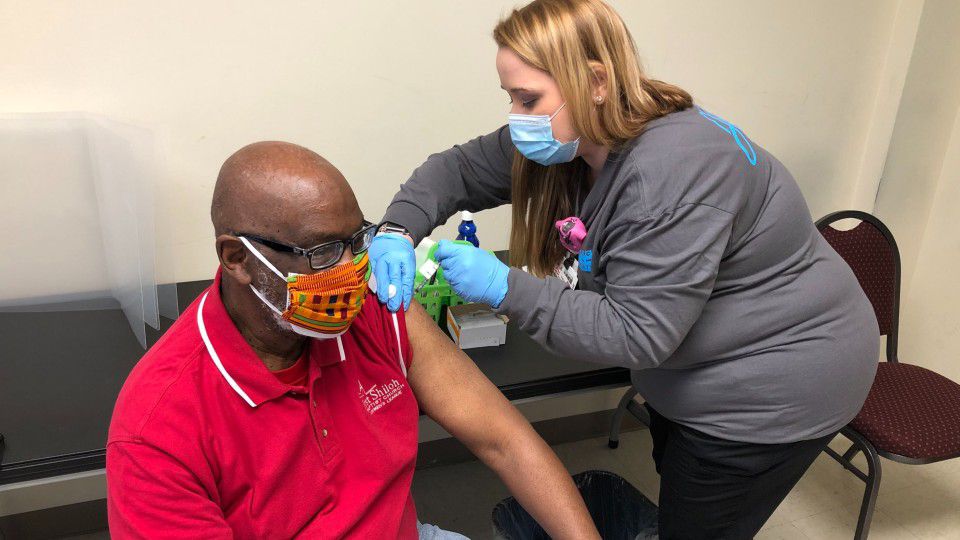 BUFFALO, N.Y. — Velma Ferguson was one of about 300 people to receive their first dose of COVID-19 vaccine at Mt. Olive Church in Buffalo Thursday.

It's one of five pop-up vaccination sites in Western New York this week — an effort by the state to reach communities of mostly Black and brown people.

"At my age, I need to be setting an example," she said. "So I decided to get this for my children, grandchildren or whoever."

Ferguson says there is a general mistrust among many African Americans about the vaccine, and she thinks settings like churches or community centers will help ease those concerns.

"It's really important to have it right in our community, and to be around others," Ferguson said. "I've seen church members out there from all churches in Buffalo."

Pastor William Gillison of Mt. Olive Baptist waited in line just like the rest to have his shot. He believes it's critical to have vaccination sites in the heart of communities that always face issues of systemic inequity, especially during the pandemic.

"It has helped to magnify the disparities among the Black and brown communities," he said.

He wished they could vaccinate even more people, but supply is limited. Along with easier access for folks who might have trouble getting to a pharmacy or a hospital further away, he sees it making a difference in a broader sense.

"It gives people hope that our community will not be forgotten in the midst all of this," he said.

The clinic was by appointment only and there was a waiting list as the church got the word out.

Community Health Centers of Buffalo and ECMC worked together to sign people up, and give shots to people who qualify in Phases 1a and 1b — with an emphasis on senior citizens.

"If you can take it out of the brick and mortar and into the community to break down the barriers and overcome that, you get a better success rate," said Dr. Kenyani Davis, medical director for Community Health Centers.

For Velma Ferguson, her message is simple: just get the shot.

"So that in the future, next year, the end of this year, we can get back to a so-called normal.

Folks who received their first dose here will come back to the same site in about three weeks to have their second shot. Organizers hope they can offer more pop-up clinics like this one in the future.