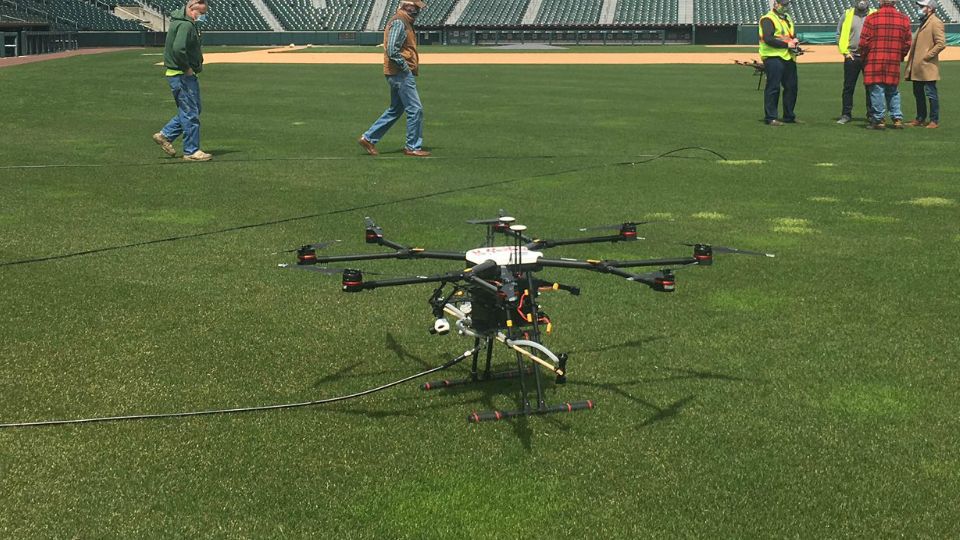 Drone technology is often used for videography and photography, but a Buffalo startup has found a way to use the unmanned aircraft systems to fight the spread of coronavirus.

The company, EagleHawk, gave a demonstration on how spraying disinfectant with drones could be used in large areas like Sahlen Field.

On Tuesday, multiple drones took flight at the Bisons’ home turf, spraying liquid on thousands of seats left empty when the coronavirus forced minor league baseball to postpone the season.

"We all are thinking about what normal is going to look like and thinking, ‘Are we going to enjoy time in a stadium with friends again?’ To do that, people need to feel safe," said EagleHawk CFO Jonathan Byrd.

Using #drones to disinfectant large areas like Sahlen Field could be the next approach in fighting the spread of #Coronavirus. EagleHawk, a #Buffalo company demonstrated how it’s done to @SPECNewsBuffalo pic.twitter.com/FpvHapTixe

Byrd says spraying disinfectant with drones is a new concept EagleHawk adopted as a result of the COVID-19 outbreak.

"We saw a lot of our business disappear overnight," said CEO and Co-founder Patrick Walsh. "Being a team of engineers, we thought, ‘How can we be a part of the solution; how can we help out?’ We started using drone technology to provide large scale disinfectant."

Walsh believes his company's solution has knocked it out of the park in providing venues and alternative method of sanitation that cuts down on costs and labor.

"The drones allow us to cover more of an area and it’s quicker to do than by hand," added Byrd.

The method is also safer, according to Walsh, who says, "We're not exposing people to chemicals as its being applied."

EagleHawk has consulted with the EPA and DEC on what products are safe for spraying and efficient for sanitation purposes.

"I think a lot of the leagues are thinking about, ‘How do we get people back in the stands?’" said Walsh. "Cleaning and disinfection will be a part of that."

The EagleHawk founders say inquiries about their new product are coming from several venues, including indoor ones like KeyBank Center.

They hope to offer it to every team in the Western New York region.