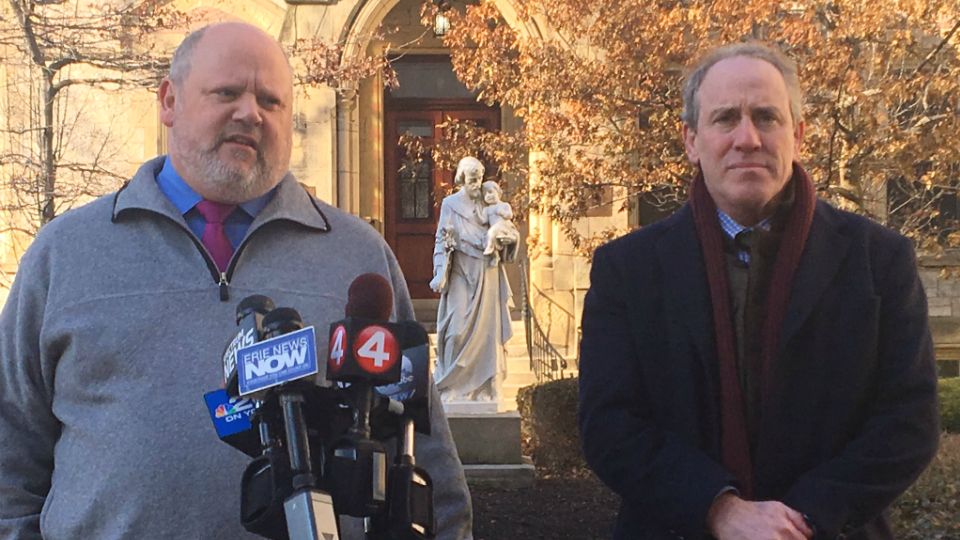 The first suit against the Diocese of Buffalo alleges the late Father Gerard Smyczynski abused their client in the early ‘80s.

It states now-former auxiliary bishop of Buffalo, Donald Trautman, covered up the abuse, paid off the victim, and expedited an annulment for his parents.

They claim he maintained the cover-up when he later served as the bishop of Erie, Pennsylvania, now retired but still in public ministry.

The Diocese of Erie has also been named as a defendant in the lawsuit.

Faluszczak and Barr are calling on the current bishop of Erie to investigate and suspend Trautman, or at best restrict his ministry.

"And so we see a pattern in Trautman's behavior. Covering up these matters, engaging in conspiracy," said Faluszczak.

In response, the Diocese of Erie said it just learned of the suit Thursday morning about the alleged activates that took place prior to Trautman being named bishop of Erie in 1990, adding:

"Bishop Lawrence Persico has seen a copy of the suit, but the Diocese has not been served. As with any litigation, Bishop Persico will cooperate, but not comment during the legal process."

The suit alleges Reina sexual molested their client at Holy Cross Roman Catholic Church in Buffalo in the early '70s, when Reina had a connection to Monsignor Joseph Gambino.

"We're alleging that this abuse took place at such time when Reina and Gambino were living together. We made a prior filing against Monsignor Gambino a couple of months ago," said Faluszczak.

"This particular client is emotionally devastated about what happened to him," said Barr.

Barr and Faluszczak say in all, they've uncovered a handful of new accused priests and two active bishops as defendants.

"Two victims, whose lives have been shattered. We feel the need to make up for what the Diocese of Buffalo has failed to do," said Faluszczak.

In response to both cases, the Diocese of Buffalo says it encourages all abuse or allegations to be first reported to law enforcement.

It is also unaware of any allegations against Reina, yet says Smyczynski is on the Diocese list of credibly accused clergy, adding:

“The Diocese – now under the interim leadership of Bishop Edward Scharfenberger as Apostolic Administrator – is assessing the appropriate level of additional detail relating to those credibly accused that may be provided as part of the Diocese’s ongoing reporting, which may contribute to the healing of survivors, who continue to be our first priority.”

Both Barr and Faluszczak say they're now awaiting a response from both dioceses and will then start collecting evidence and interviewing witnesses to determine who knew what and when they knew it.