NEWSLETTERSign up for our newsletter of the week's best stories.
SEEN ON AIRFind more details about upcoming events here.
WATCH NOWSee how our small everyday decisions have a tremendous impact on the quality of our lives in “Exploring Your Health."

There has been lot of discussion generated about the state's proposed plan to build a wind turbine farm in Lake Erie — a plan many agree hasn't been fully investigated at this time and are waiting for more information.

Members of the Sierra Club led a rally on the steps of the Rath Building in downtown Buffalo Thursday afternoon in favor of the project.

Diamond Generating Corporation, a California-based company, is looking to put 50 turbines in Lake Erie, 450 feet in the air. To put in perspective, turbines would be taller than Buffalo City Hall, but not quite as tall as Seneca One. 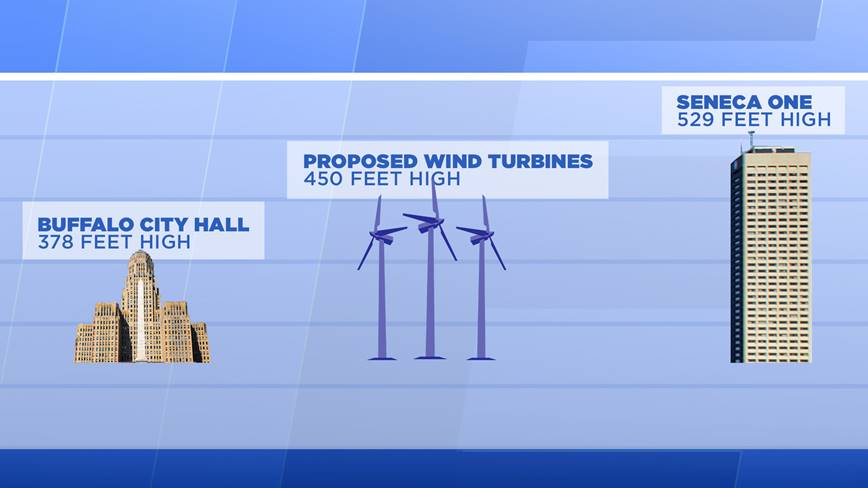 Rallygoers in favor, including local iron workers, say the farm will support and provide clean energy, create jobs and stimulate the economy.

Following the rally, those voices joined others in opposition at Erie County legislature's energy and environment committee during a special session to explore all sides of the topic with several speakers from both sides of the issue on hand.

Those opposed to the project, including Chautauqua County Executive George Borello and town of Evans leaders, say the turbines are an investment scam, bad for the environment, a threat to drinking water and border security.

Both legislators John Mills and Lynne Dixon have sponsored a resolution opposing the wind turbine project.

"I'm against putting anything in Lake Erie. It's number one, our fresh water supply for a number of counties and several million people. It has to be handled very delicately. And putting commercial wind turbines in our lake is a bad idea," said John Mills, (R) Erie County Legislature, District 11.

"The experience we've had so far is that it could be quite beneficial in some areas. We believe with current technology birds, fish and wildlife, and drinking water can all be protected. And we will have a source of clean energy," said Robert Ciesielski, Sierra Club Atlantic Chapter Energy chair.

Thursday's rally and hearing came a day after state Sen. Chris Jacobs announced legislation calling for a moratorium, or halt, to the construction or placement of wind turbines along any fresh water body in the state.

Lawmakers did not vote on the Mills/Dixon resolution Thursday after the hearing.

Diamond Generating Corporation did not immediately return a request for comment.