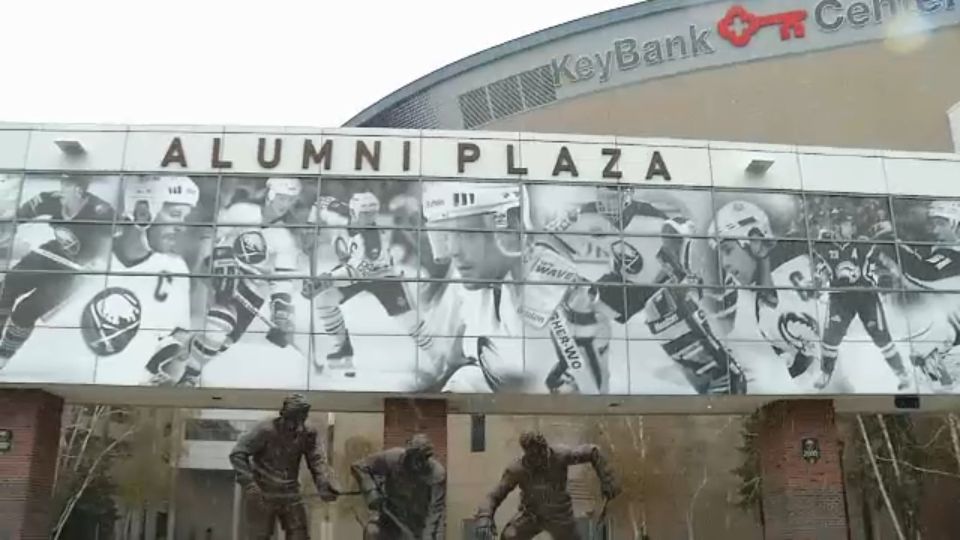 A study will determine the best options for the Bills and Sabres’ respective venues.

A privately-financed study will evaluate all long-term options for the Bills and Sabres in Buffalo.

Pegula Sports and Entertainment has hired CAA ICON to help determine the next steps for the 45-year-old Buffalo Bills stadium, and for potential renovations to the 23-year-old KeyBank Center. The study will include direct feedback from fans.

“The number one priority for this study is the fan experience,” said PSE President & CEO Kim Pegula in a press release.

Pegula Sports and Entertainment is working with CAA Icon on potential #Bills stadium needs and renovations to KeyBank Center. pic.twitter.com/eHhpOVD71z

The study is set up in two parts in relation to both major sports teams and their respective venues. A stadium feasibility study with determine if a new football stadium is required, or if renovations to New Era Field is the best course of action. It was also focus on modernizing the Sabres' home.

“As both New Era Field and KeyBank Center have aged, they have fallen behind modern standards,” said Bruce Popko, PSE’s Chief Operating Officer, in a press release. “Terry and Kim Pegula have invested more than $2 billion of their own money in our market, including $350 million in privately-financed venue upgrades and expansions. With both leases nearing expiration, we look forward to developing a plan and working with our public sector partners to solidify the futures of the Bills and Sabres.”

Popko stressed that this is just the beginning of the process and that the Pegulas are going into the study with no preconceived notions or expectations.

"The primary basis for why we're doing it" is to figure out next steps and where to go from here, Popko said. "To talk to every key stakeholder out there, to try to make a determination of what preferences are out there, what we can afford, and really what the marketplace wants."

Fans will be included in the conversation as well, both as sports enthusiasts and taxpayers, he said.

Pegula Sports and Entertainment are at the very beginning of a process to determine the best way to improve the venues where their teams play, but the fan experience will be a key component going forward, said Bruce Popko, @PegulaSE's chief operating officer. pic.twitter.com/r2u5hNY4Jo

The study is expected to take the next six to nine months to complete, with discussions with public officials to follow to determine how to pay for any proposed or recommended changes.

“CAA ICON has an extensive resume, having participated in dozens of first-class professional facilities, along with HarborCenter and Penn State’s Pegula Ice Arena. We have the utmost confidence that CAA ICON’s unparalleled experience will help ensure that our venues achieve the highest standards," Kim Pegula said in a press release.

In a statement, Erie County Executive Mark Poloncarz said that retaining a consultant to conduct such studies was discussed earlier this year and has been done in the past by the Bills, including in 2012 when the team's lease was negotiated.

"Nothing announced today should indicate any particular action, such as building a new stadium or hockey arena, will in fact occur," Poloncarz said. "Any final decision will ultimately be made by the Pegulas through PSE, the county and New York State after future negotiations. I look forward to continuing to serve in the role as chief negotiator for the county during these discussions, and in the meantime the county will continue to fulfil its commitments to improve the football stadium pursuant to the 2013 lease agreement."

"My administration has worked closely with Pegula Sports & Entertainment and they have been a significant contributor to the economic development momentum and investment interest we are seeing in the city of Buffalo," Brown said. "The fact that they are looking at the potential of additional major investments in our city is extremely good news."