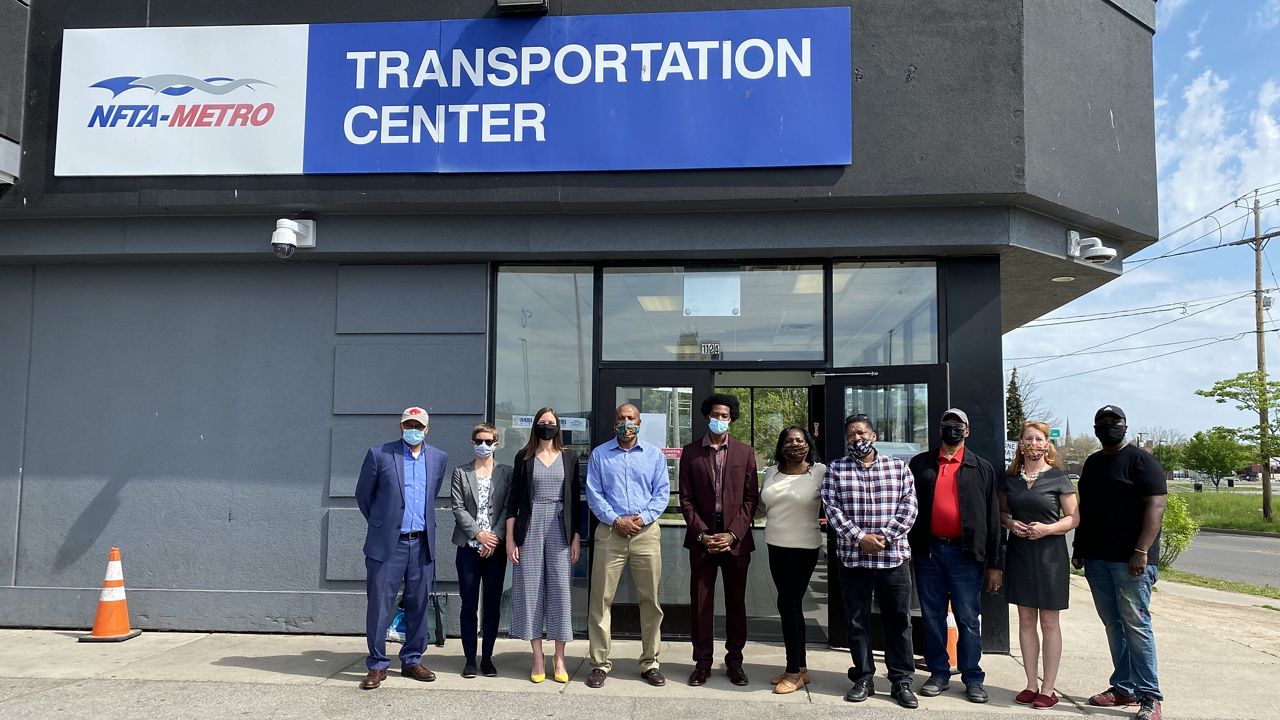 Artist Jalen Law (fifth from left) with members of the NFTA and Niagara Falls National Heritage Area in front of the Portage Rd. Transportation Center

NIAGARA FALLS, N.Y. — “I would just say, I’m an artist who has a message that hopes to create an environment that can bring positive change for everybody to benefit from,” said 29-year-old artist Jalen Law. The Buffalo native isn't just an artist, however; he is an educator, implementing aspects of emotional intelligence, social justice and ancestral ties into is projects.

Through the work of his hands, he forges bonds between the viewers of his art and greater messages for them to take from it. His latest project, making a canvas of the blank spaces in the NFTA-Metro Transportation Center on Portage Road in Niagara Falls, is shaping to prove just that. Law was selected over a number of individuals who responded to the NFTA's call for artists at the end of 2020 to implement artwork into the center. While the authority's officials saw a vast wall in need of beautification, Law saw the locals around the space and a way to bring them in through a sense of belonging.

“I wanted to take it a step further to add a sense of deeper connection between the residents who utilize their transportation system with the city itself, "he said.

He began implementing the piece on Thursday, thoughtful and meticulous about everything, from technique to color theory. He explained how the latter is especially impactful to viewers of his public art.

“Color has a sense of being able to influence and move people to certain emotions, and I was able to notice that when I was priming the wall with some of the residents waiting for their transportation to come," Law said while painting the first brushstrokes of the transformative piece. "I remember it being really hectic in here when I first started cleaning, but as soon as I started putting primer to the wall, everybody almost had this mesmerized, calm look upon themselves as they were watching me roll a six-foot extendo paint roller onto the wall with all this white primer.”

Intentional use of color was certainly what Jalen had in mind when he created a mural honoring the late boxer Calvin “Pop” Porter just a few blocks away from the transportation center. Nearby is another mural co-created by an artist Jalen cites as one of his influences, Tyshaun Tyson. The appreciation is mutual, as Tyshaun was present to witness the inaugural brushstrokes of Jalen’s newest mural.

“It means a lot to be out here supporting a fellow artist," said Tyson, who is also known as the 'Left-Handed Bandit.' "It’s awesome to see the progress of the different artists that we’ve worked with with the Niagara Falls National Heritage Area over the last couple of years, as well as someone like Jalen specifically. The types of things I’ve seen him doing over the last year or so, and knowing who he was, has been pretty remarkable. It’s exciting to see the progress he’s making from that on the Niagara Falls wall on Main Street to seeing him here. I’m looking forward to seeing what the outcome is going to be; literally excited.”

The locals were also excited to view the piece that, when completed, can be observed from outside the transportation center. Having such a large audience for his work is why Jalen is so thoughtful about his art, as it ultimately becomes the greatest conveyor of his intentions.

“It’s a different process versus, when I’m working on a public art project versus a canvas because there’s so many different factors you have to put into play. One of my most important elements that I like to put into play with my artwork is creating work that can be simplistic in design but impactful in message.”

The impact is designed to spread with each viewer of the piece. Once completed, Law plans to implement another surprise component that will allow Niagara Falls residents to directly interact with the work in ways that they can help bring about change that they hope to see in their community.