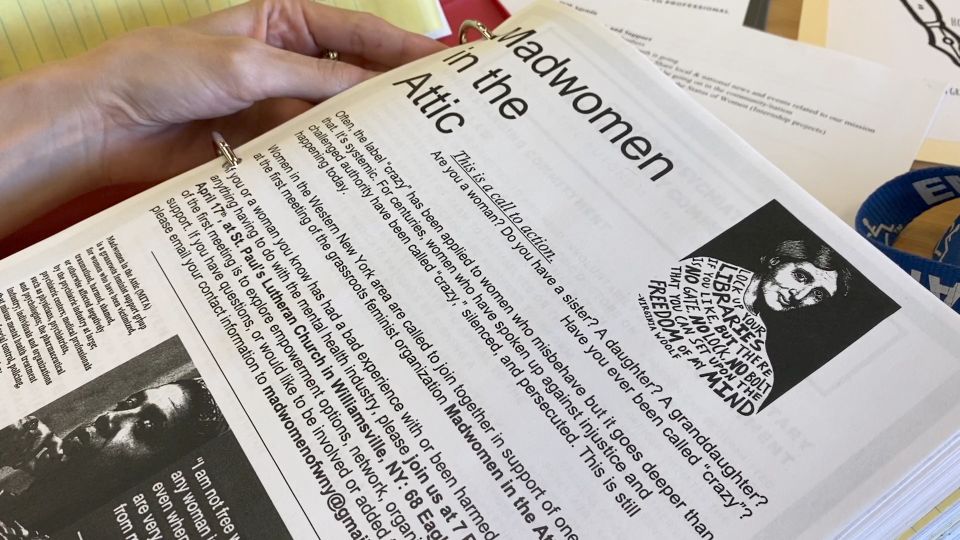 Mental health is important, but for some marginalized communities, finding a place that actually helps can be difficult.

That’s why one group is creating a community for those who were mistreated and trying to change the system in the process.

“A certain hospital came through with a huge group of people, very enthusiastic," said Hanna Etu, the Madwomen in the Attic regional literacy director for Rochester as she described her experience with a recent Pride parade. "I’m sorry, I’m not clapping for them.”

For Madwomen in the Attic, their community is built through mistreatment in the mental health system.

“I feel badly for this doctor, but cannot understand why I cannot see someone else at the practice," read Etu from a piece of writing describing her experience. "Do they not care? What if I were suicidal? I’d be dead before I ever make it to the appointment.”

Story after story, they are looking to effect change through their words and their experiences.

“I let those men carry my shame for once. They had ripped my hair from my head with their shoes when they picked up my body," read Summer Javadi, a Madwomen in the Attic participant. "They had left bruises on my legs to grab enough holds to carry me to the quiet room.”

“We want to change hearts and minds by daring a stranger reader to care about what we care about,” said Madwomen in the Attic co-founder Jessica Lowell Mason.

She was one of the facilitators of the workshop during which these stories were shared.

Mistreatment within the mental health system is something she knows firsthand.

“My mother's way of trying to get me to not be gay was to threaten me with institutionalization. So this is going back many years in my life," she explained. "I come full circle and I'm 32 years old, and I'm institutionalized in a situation where my identity made me 'other.'”

Madwomen in the Attic's members vary in age, location, and background, but many are part of the LGBTQ community.

“To me, being queer means also fighting for the right for mad people to exist in the community as we are,” said Janelle Gagnon, another of the facilitators during the workshop and the disability program coordinator for Herstory Writers Network.

This workshop is one of many and is a collaboration with Herstory, but Madwomen in the Attic's reach goes beyond paper.

They are trying to break down the stigma.

“Marginalization contributes to both people's ability to get help and also their ability to do refuse help and to say, 'I'm being targeted.'”

They give out resource sheets, inform people of their rights, and provide support.

“We did the December Letters project where we sent letters to people who were institutionalized, and help them just feel not so alone during a very difficult time of the year,” explained Etu.

With time, things have gotten better, but issues still exist.

“Transgender youth, gender non-conforming youth who are misgendered are at a much higher risk of suicide," explained Melissa Bennett, the other co-founder of Madwomen in the Attic. "These are mental health issues that are not their fault, are caused from their experiences and traumatizations, [and] are in turn affecting their mental health.”

They want to make clear that everyone’s experience matters, and whether or not the world is ready to face them, this community is there.

“People have a chance to create their own kind of archive, their own stories," explained Mason. "To preserve them in a way that is outside of the system, but that is valued.”

To contact Madwomen in the Attic or learn more about the group, click here or email madwomenofwny@gmail.com.