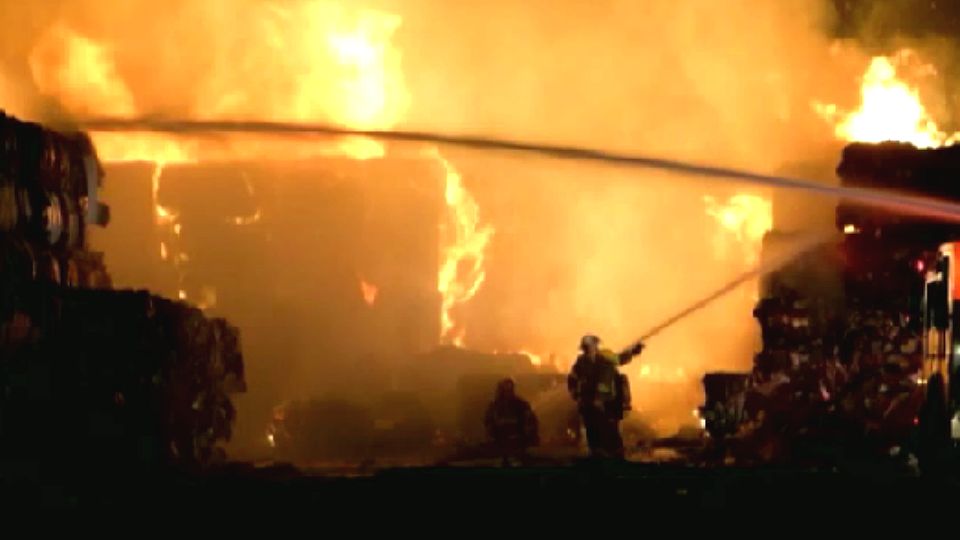 NIAGARA FALLS, N.Y. — It's been going since 10 p.m. Monday and the fire continues to burn at a cardboard a storage facility in Niagara Falls.

Both firefighters and crews from Buffalo Fuel Corporation Manager credit each another for containing the fire, all saying things could have been much worse.

A worker saw the fire and called 911 Monday night, and after more than 12 hours of battling the flames, the smoke began to subside. Firefighters say a steady downpour of rain helped them in their efforts.

Crews are picking through what’s left of the heavy machinery to make sure all of the fire is out.

The recycling facility is where companies like Amazon get their materials for the recycled boxes they use for shipping.

DEVELOPING: Raw video from the scene of a massive fire at a cardboard stockyard in Niagara Falls. Firefighters say about 3,000 bales of cardboard caught fire and it will take most of the day to knock it out. pic.twitter.com/6Fq4BjvRP0

Workers from the College Avenue facility took their heavy equipment and started pulling out all the bales of cardboard that were not on fire, which helped the flames from spreading. About 3000 individual stacks caught fire.  Officials say, the way they were set up in rows, it was like tractor trailers going up in flames.

Buffalo Fuel Corporation manager Aaron Santarosa credits the number of firemen who have been on scene throughout the night for saving half of the yard.

“Fantastic job they came in they handled the fire very well they knocked it out," said Santarosa. "Frankly for where the fire is right now we are very impressed, happy — this is an unfortunate situation that is easily made a lot more better and a lot more palatable so we are thankful that they got her so quickly and so efficiently.”

The cause of the fire is still under investigation. As the flames continue to burn there’s really not a whole lot of investigating that can be done. The fire chief says us the recent stretch of warm and dry weather are being looked into as a possible factor.

Firefighters are hoping to have the flames knocked out by sometime Tuesday.