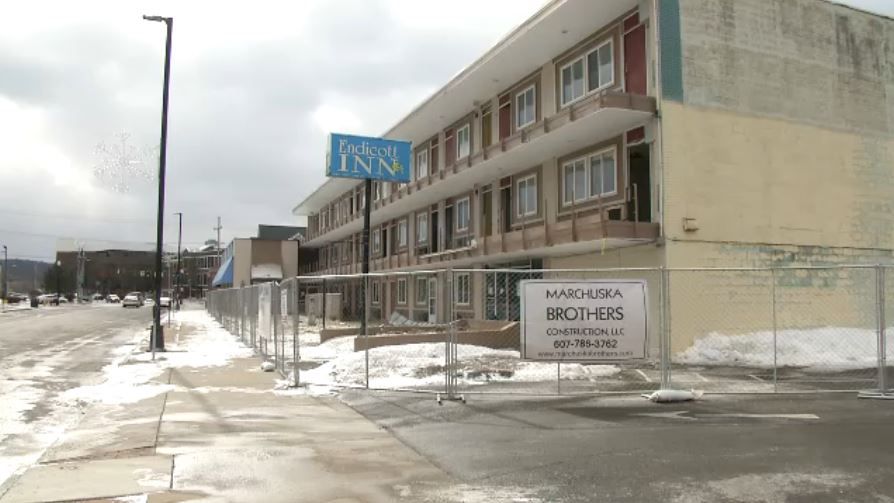 Endicott Inn, a Community Trouble Spot, Is Coming Down

It’s a feeling many share in the Endicott community.

"It's a symbol. A symbol of decline, a symbol of what used to be. It's just sort of a never ending contribution to low morale," said Democratic state Assemblyman Donna Lupardo.

The Endicott Inn is a more than 100-year-old eyesore once housed guests visiting what was then a new village.

Good news for many in the Village of Endicott. The Endicott Inn is finally coming down pic.twitter.com/m0GmQ0hfTA

But in recent years, police say the inn has become a beacon of crime and illegal behavior.

"With different drug-related crimes, things like that, the state police and the sheriff’s office would also be in here, SIU unit. It definitely was something we had to focus on,” said Endicott Police Chief Patrick Garey.

But that focus can finally shift to other areas of the village, as the Endicott Inn is officially coming down.

Crews have already begun work on the back half of the building with more to come in the next couple of days.

Mayor John Bertoni says this is just the start of much more.

Local leaders say the removal of this building marks a new beginning, not just for the village, but for the country as a whole.

"We have millions of dollars in investment lined up in this avenue through the Greater Binghamton Fund. In two years, you're not going to believe what this place is going to look like," said Broome County Executive Jason Garnar.

The Endicott Johnson Shoe Company originally built the hotel in 1906.