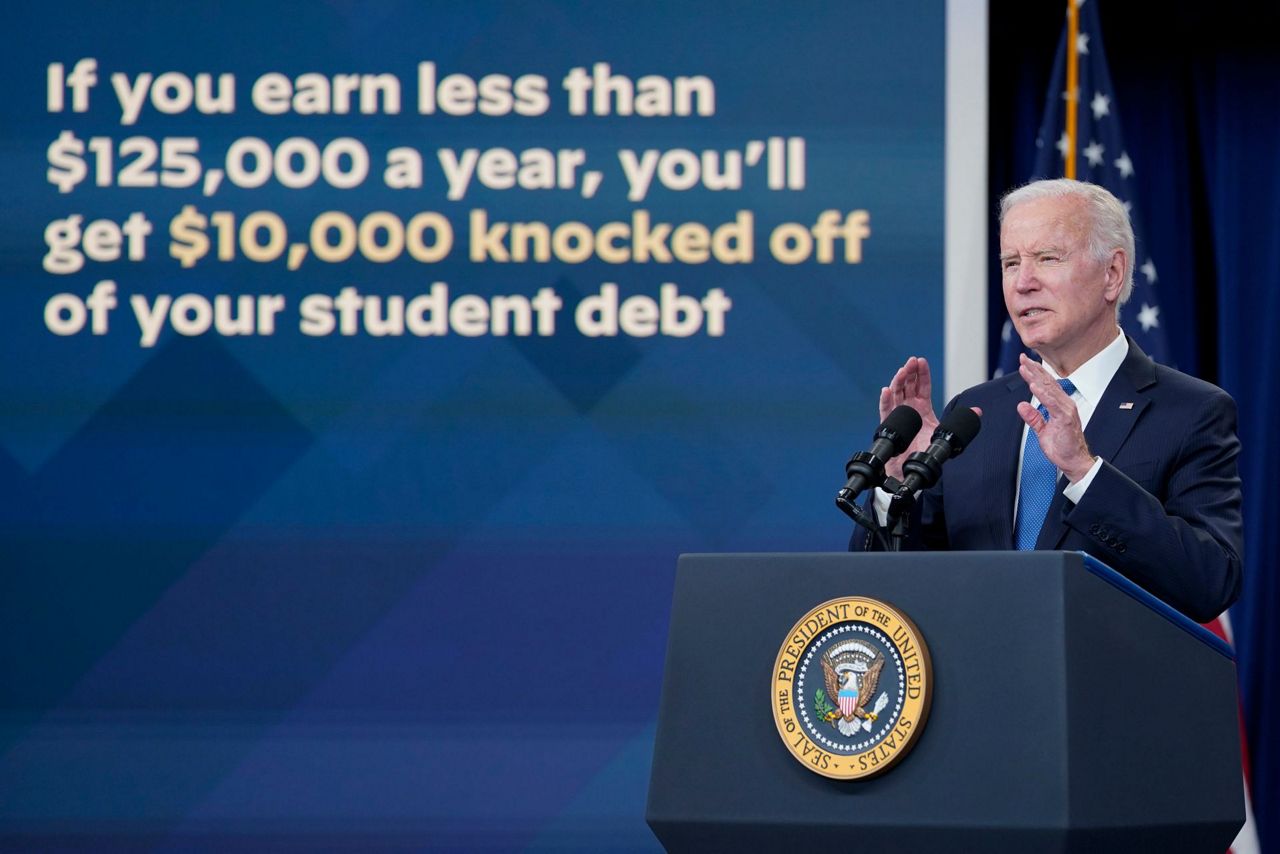 Everything to know to apply for student loan forgiveness

NEW YORK (AP) — President Joe Biden’s student loan forgiveness program. announced in August, will cancel up to $20,000 in debt per borrower. The application process is now open, and the administration says the forms should take five minutes to complete.

Borrowers who apply before mid-November should see forgiveness before Jan. 1, when payments on loans are scheduled to restart after a pause during the pandemic. Some Republican-led states have filed lawsuits to try to stop the cancellation, but the Biden administration says they’re confident the challenges won’t succeed.

Here’s how to apply, and everything else you need to know:

WHO QUALIFIES FOR STUDENT LOAN FORGIVENESS?

You qualify to have up to $10,000 forgiven if your loan is held by the Department of Education and you make less than $125,000 individually or $250,000 for a family. If you received Pell grants, which are reserved for undergraduates with the most significant financial need, you can have up to $20,000 forgiven. If you are a current borrower and a dependent student, you will be eligible for relief based on your parents’ income, rather than your own.

One major lingering question is what will happen to students with commercially held FFEL loans who didn’t refinance before Sept. 29. At the moment those loans are not eligible (even though they were initially going to be eligible). The administration has said it’s looking for “additional legally-available options to provide relief” to those borrowers, but nothing has been announced yet.

HOW DO I APPLY FOR LOAN FORGIVENESS?

Go to studentaid.gov and in the section on student loan debt relief, click “Apply Now.”

Be ready to type in some basic personal information. The form asks for: name, Social Security Number, date of birth, phone number and email address. It does not require documentation about your income or your student loans.

HOW LONG WILL IT TAKE TO RECEIVE FORGIVENESS?

After the form is submitted, the Biden administration says it should take four to six weeks to process. The Education Department will use its existing records to make sure your loans are eligible and to look for applicants who might exceed the income limits. Some will be asked to provide additional documentation to prove their incomes. The Education Department estimates that the verification application will take about half an hour, including time to review and upload tax documents.

Most borrowers who apply before mid-November should expect to get their debt canceled before Jan. 1, when payments on federal student loans are scheduled to restart after a pause during the pandemic.

Things could get more complicated, depending on the outcomes of several legal challenges. The Biden administration faces a growing number of lawsuits attempting to block the program, including one filed by six Republican-led states.

A federal judge in St. Louis is currently weighing the states’ request for an injunction to halt the plan. Biden on Monday said he’s confident that the suit will not upend the plan. “Our legal judgment is that it won’t,” he said, “but they’re trying to stop it.”

HAS THE STUDENT LOAN PAYMENT FREEZE BEEN EXTENDED?

The payment freeze has been extended one last time, until Dec. 31. The freeze started in 2020 as a way to help people struggling financially during the COVID-19 pandemic and it’s been extended several times since. It was set to expire Aug. 31.

Interest rates will remain at 0% until repayments start. Under an earlier extension announced in April, people who were behind on payments before the pandemic automatically will be put in good standing.

WHAT IF MY STUDENT LOAN BALANCE INCLUDES A LOT OF INTEREST?

The interest itself is considered part of the balance for purposes of this program. Forgiveness will remove $10,000 from the total balance you owe.

WILL I HAVE TO PAY TAXES ON THE AMOUNT I’M FORGIVEN?

At least a few states have said they plan to tax the forgiveness, including Indiana and Mississippi, and it’s unclear whether some others will change their tax rules to exclude forgiven student debt. Previously, Congress eliminated taxes on loan forgiveness through 2025.

DO PARENT PLUS LOANS QUALIFY?

Parent Plus loans are included in the forgiveness plan, subject to the same $250,000 income cap for families that applies to the rest of cancellation.

Parent Plus loans differ from other federal education loans in that they can go towards covering expenses other than tuition, such as books, and room and board for college students. As of March 2022, parents of 3.6 million students owe more than $107 billion in Parent Plus loans, according to the Department of Education. That represents about 6% of the total amount of federal student debt held by Americans.

If a parent received a Parent Plus loan on behalf of a student and the same student received a direct loan, both would receive relief, as the cancellation is on a per-borrower, not a per-student basis. That means that each person who has Education Department-held federal student loans and meets the income requirements qualifies for cancellation.

WHAT’S A PELL GRANT AND HOW DO I KNOW IF I HAVE ONE?

Roughly 27 million borrowers who qualified for Pell grants will be eligible to receive up to $20,000 in forgiveness under the Biden plan.

Pell grants are special government scholarships for lower-income Americans, who currently can receive up to $6,895 annually for roughly six years.

Nearly every Pell Grant recipient came from a family that made less than $60,000 a year, according to the Department of Education, which said Pell grant recipients typically experience more challenges repaying their debt than other borrowers.

Pell grants themselves don’t generally have to be paid back, but recipients typically take out additional student loans.

“This additional relief for Pell borrowers is also an important piece of racial equity in cancellation,” said Kat Welbeck, Civil Rights Counsel for the Student Borrower Protection Center. “Because student debt exacerbates existing inequities, the racial wealth gap means that students of color, especially those that are Black and Latino, are more likely to come from low-wealth households, have student debt, and borrow in higher quantities.”

To find out if you have a Pell grant, check any emails you’ve received that describe your FAFSA award.

HOW MANY PEOPLE WILL THIS HELP?

WHAT IF I’VE ALREADY PAID OFF MY STUDENT LOANS — WILL I SEE RELIEF?

If you’ve voluntarily made payments since March 2020, when payments were paused, you can request a refund for those payments, according to the Federal Office of Student Aid. Contact your loan servicer to request a refund.

WHAT REPAYMENT PLAN IS THE DEPARTMENT OF EDUCATION PROPOSING?

The Department of Education has proposed a repayment plan that would cap monthly payments at no more than 5% of a borrower’s discretionary income, down from 10% now. Borrowers will need to apply for the repayment plan if it’s approved, which could take a year or more.

For example, under the proposal, a single borrower making $38,000 a year would pay $31 a month, according a government press release.

The amount considered non-discretionary income will also be increased, through the department has not said how much.

Discretionary income usually refers to what you have left after covering necessities like food and rent, but for student loan repayment purposes it’s calculated using a formula that takes into account the difference between a borrower’s annual income and the federal poverty line, along with family size and geographic location.

“What’s tough about income-driven repayment is that it does not take into account your other liabilities, such as your rent payment,” said Kristen Ahlenius, a financial counselor at Your Money Line, which provides financial literacy training. “If someone’s living paycheck to paycheck and their rent is taking up half of their paycheck and then their car payment takes the other, they have to choose. Unfortunately, income-driven repayment doesn’t take that into consideration, but it is an option.”

WHAT IF I CAN’T AFFORD TO PAY EVEN WITH LOAN FORGIVENESS?

Once payments resume, borrowers who can’t pay risk delinquency and eventually default. That can hurt your credit rating and mean you’re not eligible for additional aid.

If you’re struggling to pay, check if you qualify for an income-driven repayment plan. You can find out more here.

The Biden plan also includes a proposal that would allow people with undergraduate loans to cap repayment at 5% of their monthly income. Proposals like this one can take a year or more to be implemented, and it’s not clear what the fine print will be.

If you have worked for a government agency or a non-profit organization, you could also be eligible for the Public Service Loan Forgiveness Program, which you can read more about here.

Collin Binkley contributed to this report from Washington.

The Associated Press education team receives support from the Carnegie Corporation of New York. The AP is solely responsible for all content.