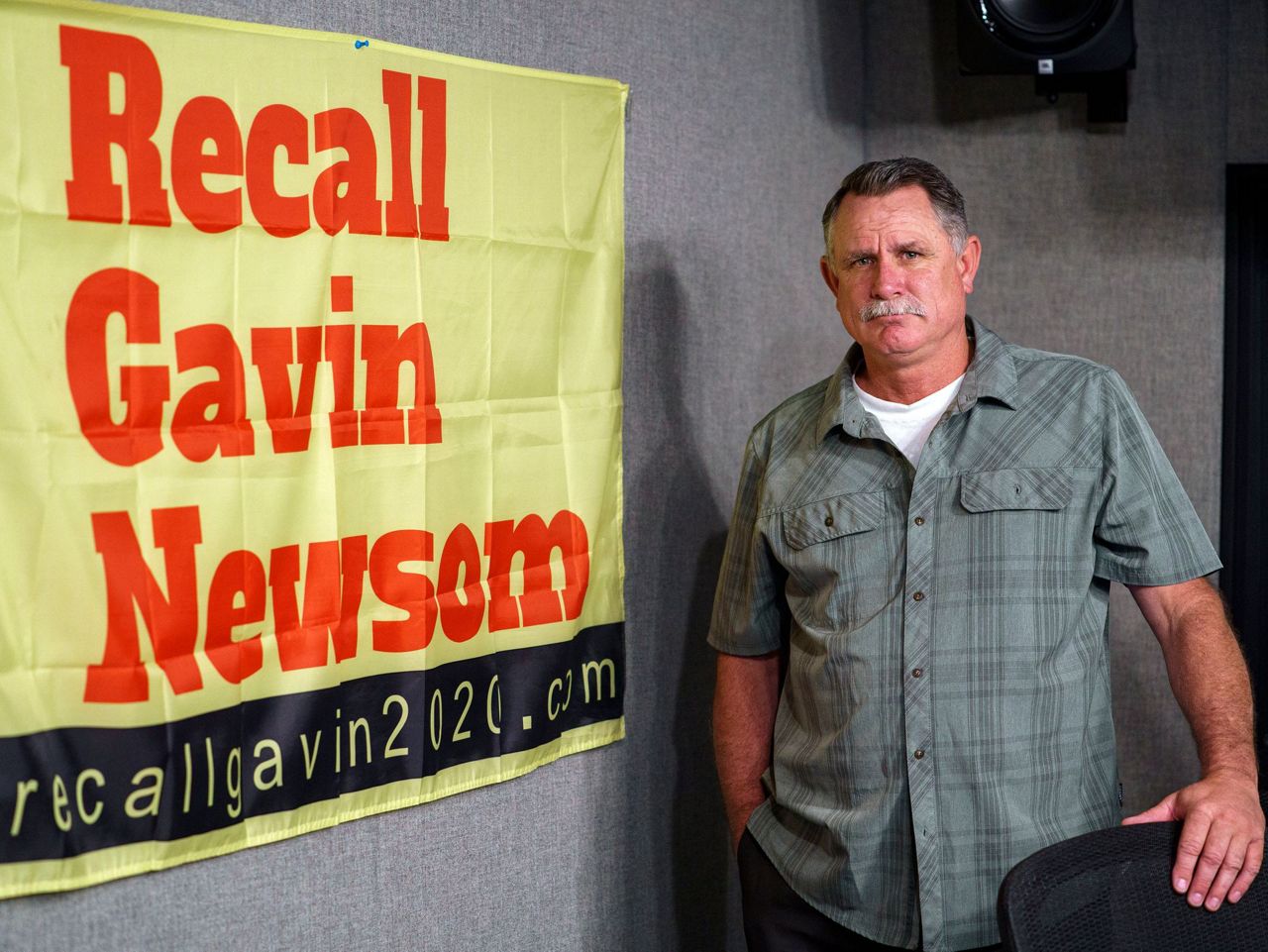 1 of 5
Orrin Heatlie, the main organizer for the Recall of California Gov. Newsom campaign, poses with a banner before recording a radio program at the KABC radio station studio in Culver City, Calif., Saturday, March 27, 2021. (AP Photo/Damian Dovarganes) 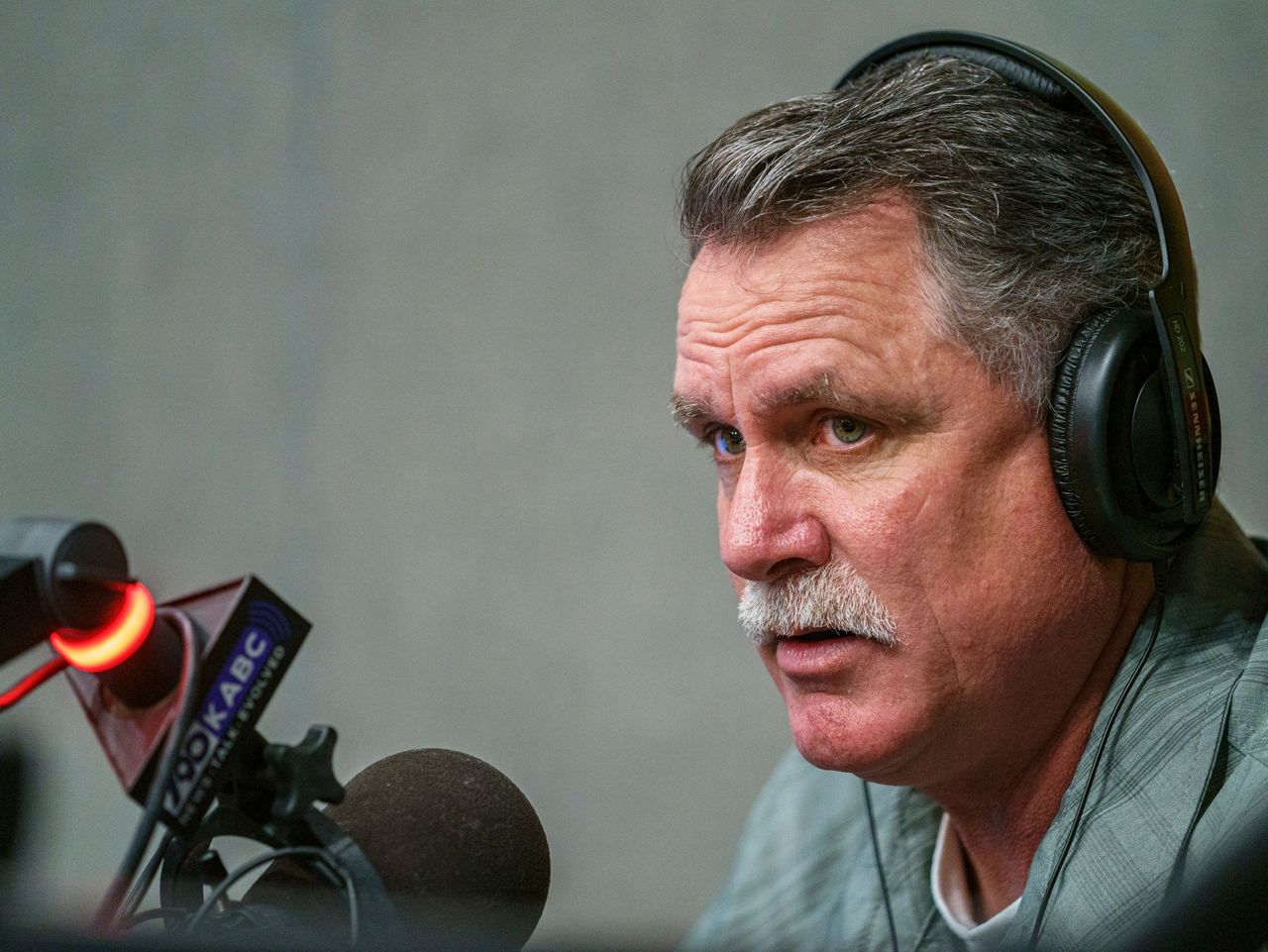 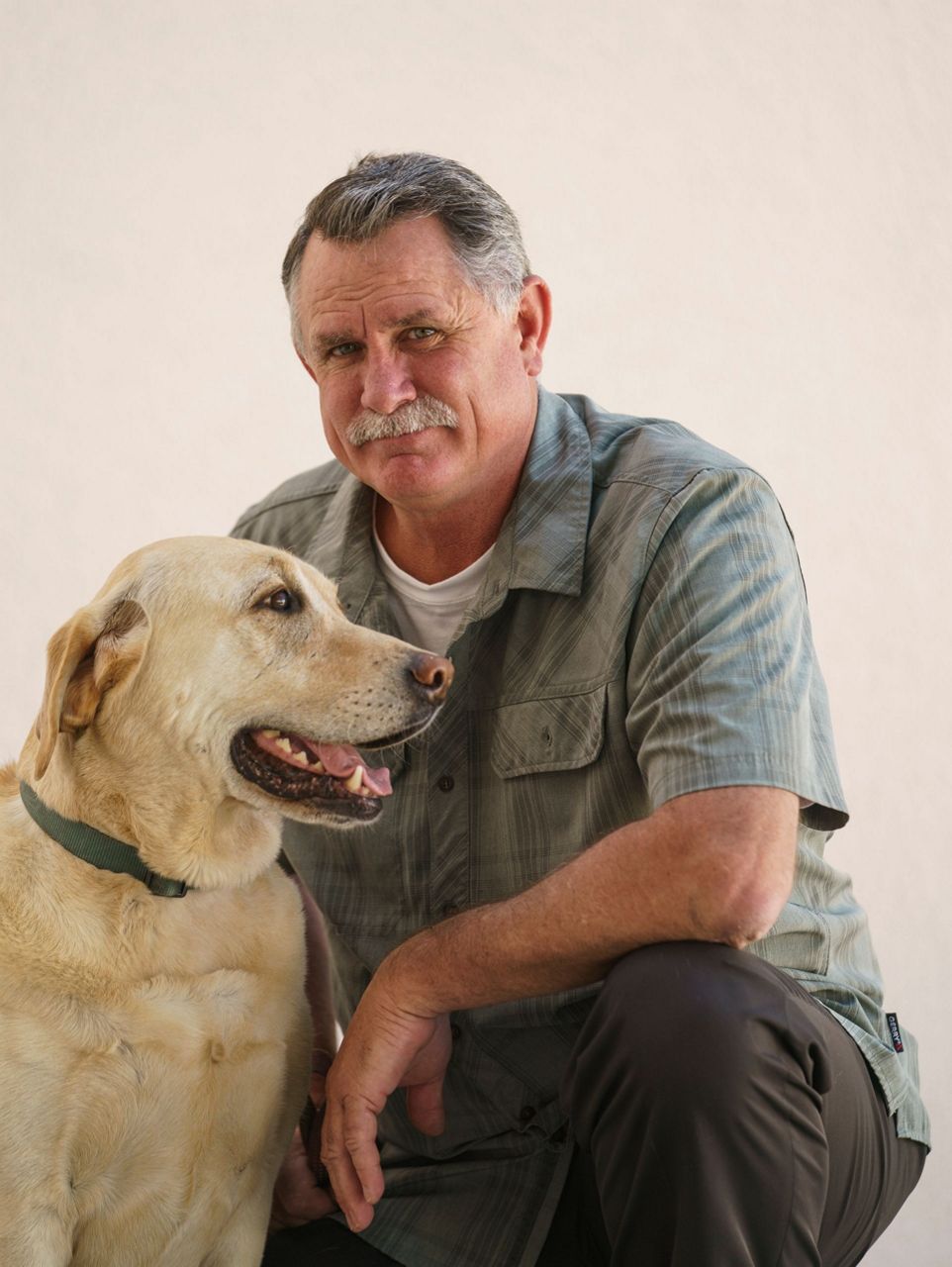 3 of 5
Orrin Heatlie, the main organizer for the Recall of California Gov. Newsom campaign, poses with his service dog Bailey after recording a radio program at the KABC radio station in Culver City, Calif., Saturday, March 27, 2021. (AP Photo/Damian Dovarganes) 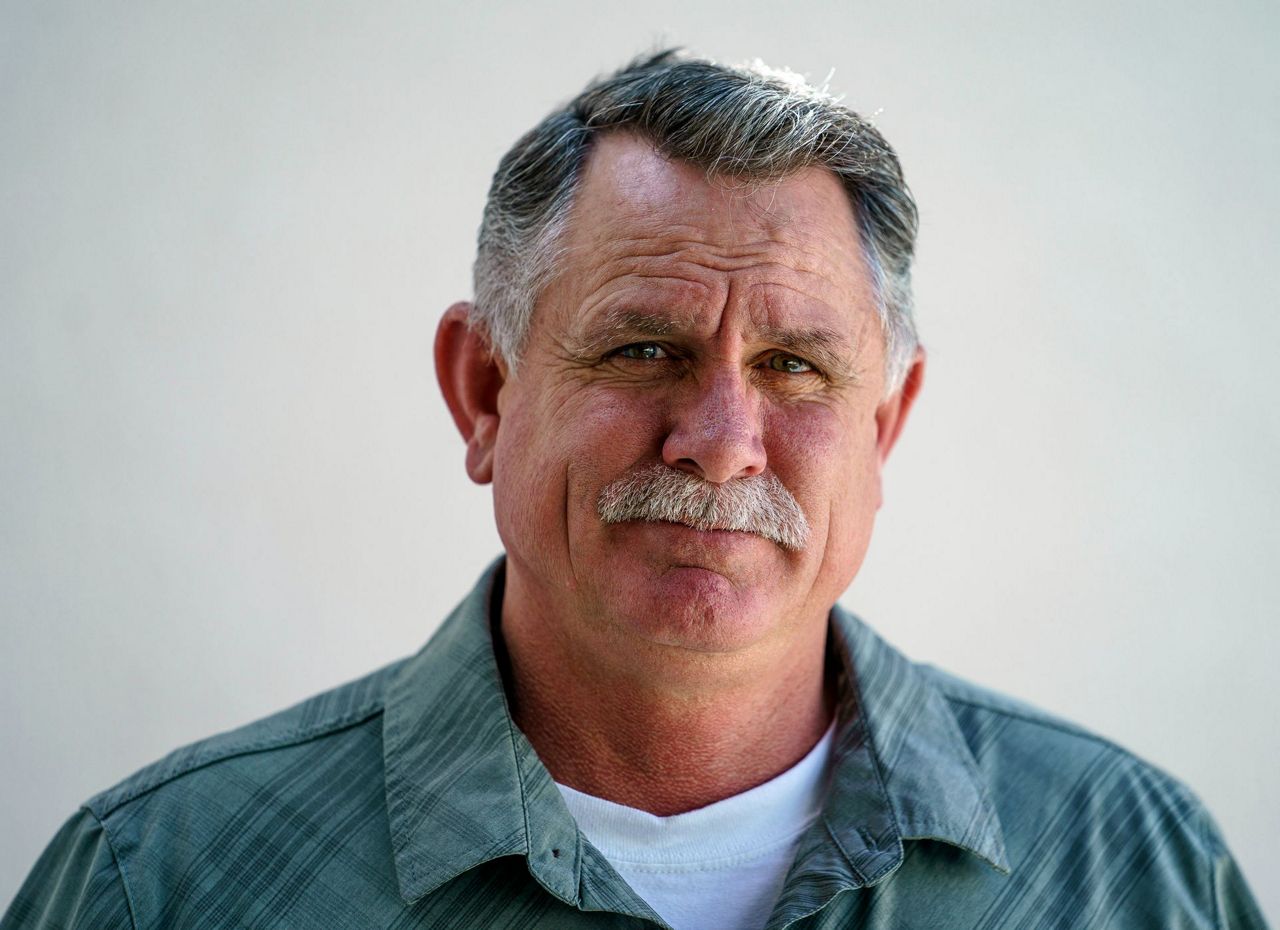 4 of 5
Orrin Heatlie, the main organizer for the Recall of California Gov. Newsom campaign, pauses for a picture at the KABC radio station studio in Culver City, Calif., Saturday, March 27, 2021. (AP Photo/Damian Dovarganes) 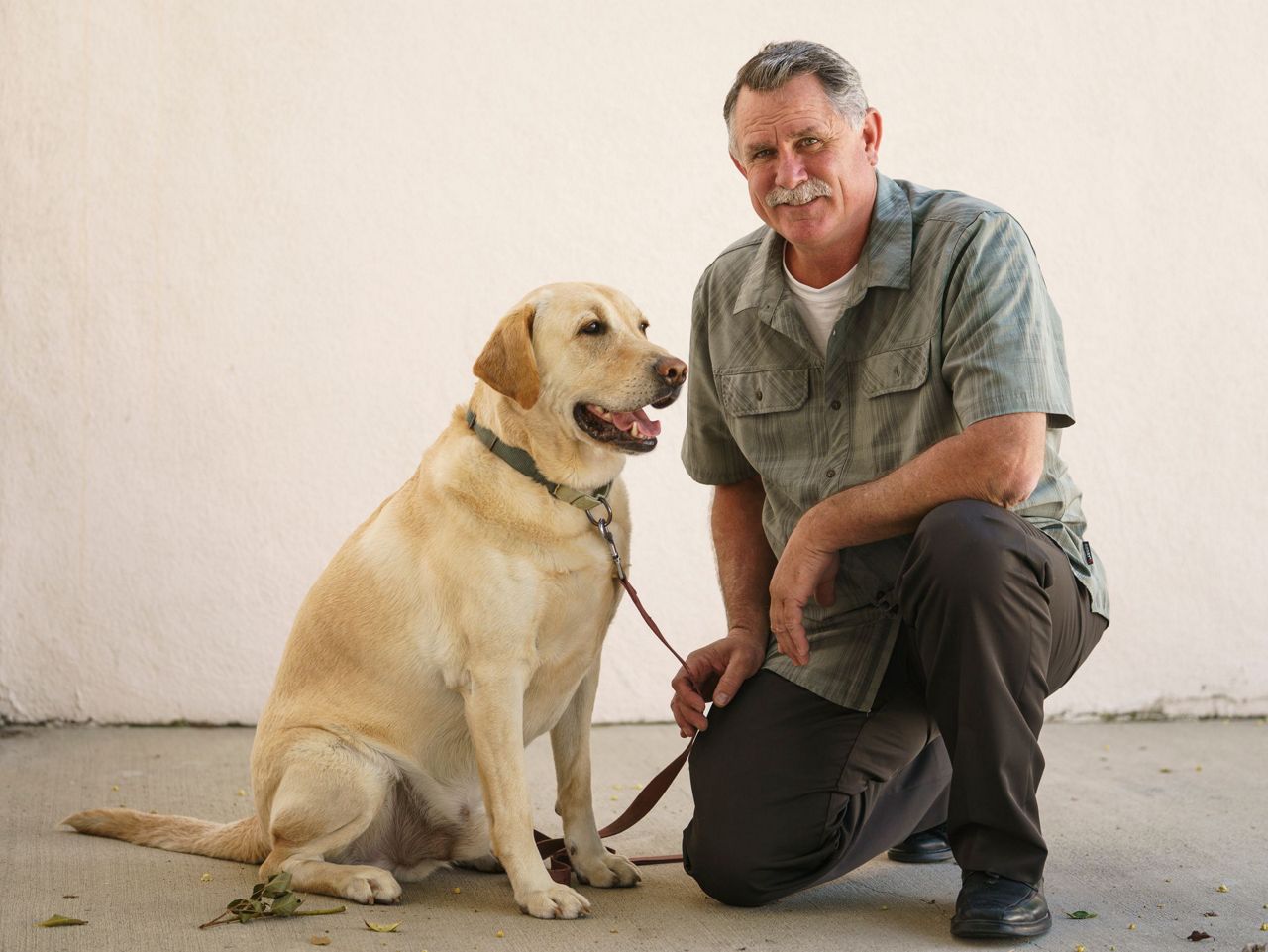 5 of 5
Orrin Heatlie, the main organizer for the Recall of California Gov. Newsom campaign, poses with his service dog Bailey after recording a radio program at the KABC radio station in Culver City, Calif., Saturday, March 27, 2021. (AP Photo/Damian Dovarganes)

FOLSOM, Calif. (AP) — Orrin Heatlie was recovering from a back procedure and browsing social media in 2019 when he found a video of California Gov. Gavin Newsom instructing immigrants in the country illegally not to open their doors to law enforcement unless officers had a warrant.

The 52-year-old retired county sheriff's sergeant was incensed, believing Newsom's message was an insult to his profession. It was an unsurprising reaction for a Republican who built a 25-year career in law enforcement.

What Heatlie did next would eventually slingshot the political neophyte to the center of California's political world: He started researching a recall campaign. Twenty-one months later, 2.1 million signatures have been gathered and it's now a near certainty that Californians will choose later this year whether to remove Newsom from office.

Heatlie said his police background gave him the organizational skills to pull off what would be only the second recall election for a governor in state history.

“It wasn’t launched on a wing and a prayer,” Heatlie said during a recent interview with The Associated Press from his home in the Northern California city of Folsom.

He started by joining an existing effort to recall Newsom. He described it as a “training mission" that allowed him to make contacts with people who ultimately would turn into his political operation when he formed his own recall effort.

For months he's been working 12-plus hour days in a silver Airstream camper in his driveway, coordinating volunteers and taking calls. He jokes his family banished him from the house because they were sick of hearing about the recall.

Heatlie lives with his wife and two children — an 18-year-old daughter he describes as a “lovely little socialist" and a 17-year-old son who is more centrist. The children's politics lead to lively family discussions but Heatlie thinks they respect his activism.

“I’m participating in something that is monumental and historic, and it’s something that, you know, this country was founded on,” he said. “We’re bringing government back to represent the people."

For an amateur political organizer to get a recall on the ballot is remarkable. While recall efforts are common, the only one to get on the ballot was in 2003 when voters replaced Democrat Gray Davis with Arnold Schwarzenegger, the state's last Republican governor. In recent months, Heatlie's effort has drawn donations and support from national Republicans including Mike Huckabee and Newt Gingrich.

Stephanie Suela, the Sacramento County coordinator for the recall, said Heatlie's effort succeeded where others failed because he had an eye for talent and created a supportive environment for his volunteers. He had a strong command of the operation and was able to “process 15 things at once,” she said.

“Orrin is really good-hearted when people are in need," she said, recalling how he organized a GoFundMe account to help a volunteer repair her truck and bought a new computer monitor for another.

Both worked on the recall effort led by Erin Cruz, an unsuccessful candidate for U.S. House and Senate. Heatlie joined Cruz's group after seeing Newsom's immigration video and was made moderator of a Facebook group, using it to make contacts and assess the operation's flaws.

“I started to use her campaign as a live-fire training drill or a live-fire lesson, the term we use in law enforcement. Just basically a training mission to learn everything I could about the recall process,” he said.

Cruz's campaign fizzled with fewer than 300,000 valid signatures, and Heatlie filed his recall paperwork soon after in February 2020 and formed the California Patriot Coalition.

As a police sergeant, he was adept at managing people and supervising operations. And as a member of the Yolo County Sheriff Department’s crisis negotiating team, he had experience in convincing people to do things.

He reached out to veterans of the 2003 recall and eventually recruited 58 county coordinators, 27 regional leaders and more than 150 social media managers.

Republicans had many grievances against Newsom, including his moratorium on the death penalty and power shutoffs related to wildfires. But it took the pandemic and an infamous decision by Newsom to dine out with lobbyists — maskless — at a fancy restaurant while telling Californians to stay home to generate the necessary recall signatures.

Organizers submitted 55,000 signatures to the Secretary of State's office between June and November. By December, after Newsom's dinner came to light, that jumped to nearly 500,000. More kept pouring in.

Newsom ignored the effort until early March, and then came out swinging. He highlighted a Facebook post Heatlie wrote in 2019 that said “Microchip all illegal immigrants. It works! Just ask Animal control!" It was posted the same day as Newsom's social media video that sparked Heatlie's anger, according to a screenshot of the post from Capital Public Radio.

Heatlie said it was hyperbole meant to generate discussion and that he does not support forced microchipping of anyone. Facebook disabled Heatlie’s account; he said he doesn’t know why.

Beyond Heatlie, Newsom paints the effort as led by Trump-loving extremists and white supremacists, language that could boost his support with Democrats but further anger recall supporters. The group saw a jump in people downloading the petition after California Democratic Party Chairman Rusty Hicks in January called the effort a “coup" and likened it to the U.S. Capitol insurrection, Heatlie said.

Heatlie said he does not support the Proud Boys, a far-right, anti-immigrant men's group that has engaged in violent clashes at political rallies, or the QAnon conspiracy theory that believes former President Donald Trump was fighting a “deep state" and child sex trafficking ring affiliated with prominent Democrats. But he does not turn away participants based on their personal affiliations.

He said he looked into QAnon so he could understand what people were talking about and determined it was a “ridiculous premise” whose followers have been “duped.”

“We don’t ask people their affiliations, we don’t vet their background or anything like that. They have a First Amendment right to petition the government,” he said.

He's skeptical that President Joe Biden rightfully won the election, citing a debunked theory about rigged voting machines. But he's glad Trump hasn't spoken about the recall, saying it would be a distraction.

Now that the signature gathering is over, Heatlie isn't sure what's next for his group. He doesn't envision the group endorsing a candidate to replace Newsom, but he hopes they'll continue bringing grassroots energy to other races and initiatives.

“We will continue to have an influence over California," he said.