"We want our voices to be heard": NKU students hold peaceful protest after white supremacy vandalism

HIGHLAND HEIGHTS, Ky. — Students at Northern Kentucky University marched Monday in protest of what they say have been continuous racist acts on campus. Meanwhile, NKU administrators have been working on improving security after the latest act of vandalism from a white supremacist group.

The tipping point occurred in the early hours of April 3, when students found the faces of black individuals that had been painted on the Norse Commons Rock crossed out with white paint. The graffiti was tagged by the Patriot Front, a white supremacy group.

Before marching, students gathered at the same rock a little more than a week later to make their voices heard.

“At Northern Kentucky University, we stand together. That means administration. That means students. That means faculty,” said Student Government Association President-Elect Aliya Cannon to a crowd with a megaphone. “Now the real issue is that individuals continue to come in and create this distinction.” 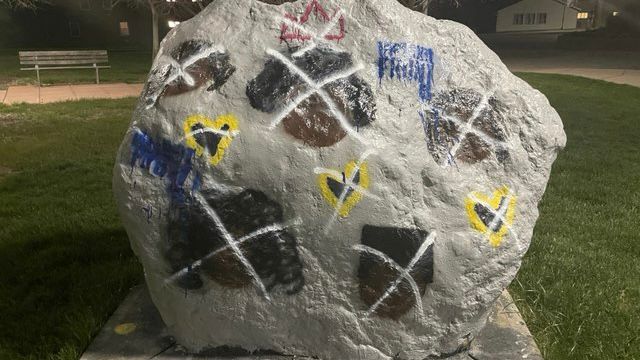 The protest was organized by students along with the support of Educate, Advocate, Transcend (E.A.T.)

E.A.T. released a statement that read in part, “The failure of NKU to act and their attempts to silence and target students who are asking for action is wrong, insulting, and unsatisfactory. Releasing the same blanket statement they have in the past and taking no action to help their students is unacceptable. The systemic racism plaguing this country must be addressed and stopped. This includes on the campus of NKU.”

NKU administration initially released a statement in response to the vandalism.

While no suspects have been identified, NKU has since put up 24-hour live surveillance on the rock.

“Our hope is to put more eyes on the rock. We hope the whole community will join us in watching 24 hours a day. If they see something, they say something,” said Vice President of Student Affairs Dr. Eddie Howard. Howard marched alongside the students.

“We don’t just want things to be said, we want action. We want it to be seen. We want it to be shown. We want our voices to be heard, not just as separate people but as united people. It’s not Black versus white. It’s not Black versus administration. It’s NKU versus the problems. And that’s how it should be,” he said. “Statements are the beginning. Statements shouldn’t be the first thing, nor the second thing or the third. After a while, statements get old, statements get tired. That’s why y’all are in y’all positions.”

University Police will increase patrols and surveillance around the rock and other areas on campus. Howard said he has also asked the Center for Student Inclusiveness for an "incident response plan," which would include long-term strategies. He has asked the team to present guidelines and a plan to move forward.