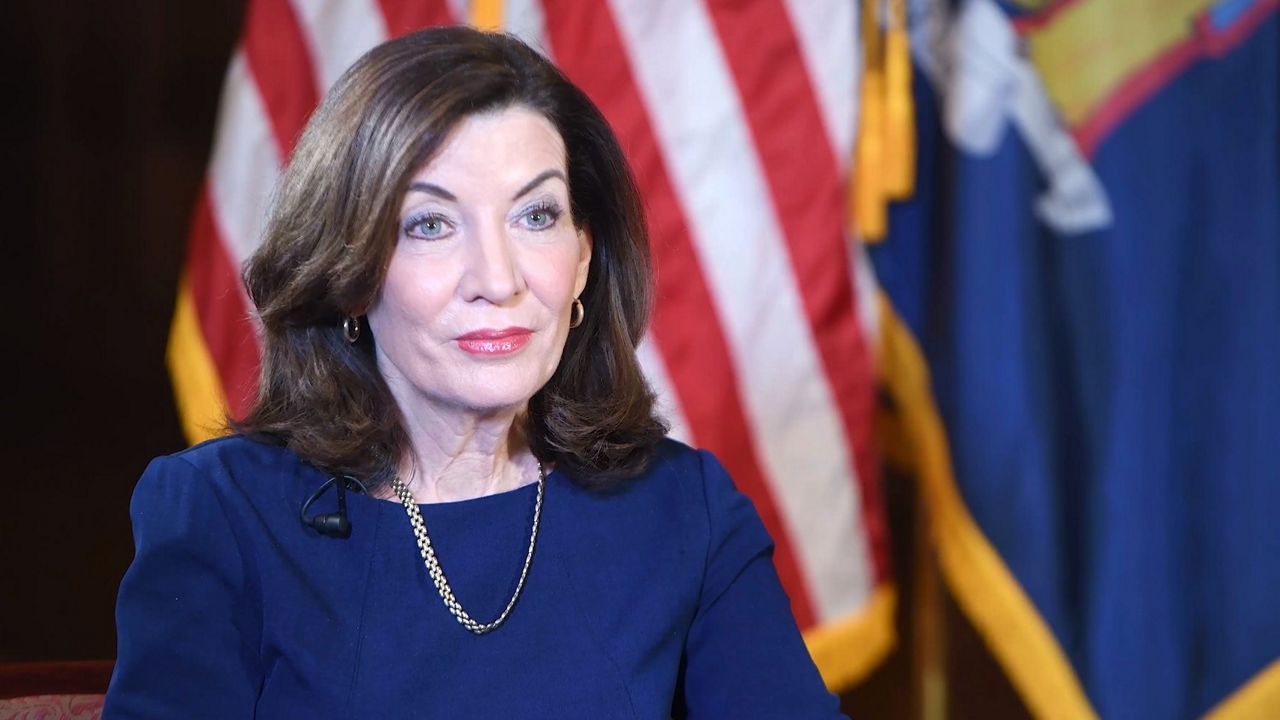 Gov. Kathy Hochul called the state budget, which is currently being debated and voted on by the Legislature, “transformative” and one that will “improve the lives of New Yorkers in every part of the state.”

The spending plan, which is comprised of 10 separate bills, is currently one week late. It includes a seven-month suspension of the gas tax starting in June, a property tax rebate, the acceleration of a middle class tax cut and an increase in the state’s rainy-day fund.

“I wanted to make sure [the budget] was forward-thinking, ambitious, but also very fiscally prudent,” Hochul told Capital Tonight.

Although the state has a large budget surplus, lawmakers have reported that the budget was an especially difficult one to negotiate. Some cited the criminal justice changes that Gov. Hochul presented to them two weeks before the budget was due.

When asked to explain her thinking, the governor cited the rising crime rate.

“The numbers, in terms of crime, violent crime, and gun violence have all been going up,” Hochul said. “They’ve been accelerating even since the time we were putting together our budget so this needed to happen before the end of session because every day that goes by that we aren’t dealing with this is negligent.”

That said, Hochul admits that the plan was “hard to get done," and understands that some lawmakers look at the new criminal justice reforms as a rollback of the 2019 laws that were passed with such fanfare. But she insists that the changes to the bail law should not be considered a diminishment of that success.

Hochul underscored that she never blamed bail reform for the rise in the state’s crime rate. She also said she’s working to defuse any tension that may remain among lawmakers unhappy with her stance on criminal justice reform.

“We will continue to work with [lawmakers] on other issues,” she said. “I know they are very happy with a lot of the investments that we’re making. Record and historic investments in health care, and child care, and pre-K and so many other areas.”

The governor has also been receiving significant blowback about the $600 million subsidy for the new Buffalo Bills stadium. Critics are asking why the state needed to subsidize a profitable sports team when the money used could just as easily have been spent on other issues.

Hochul said the stadium is a point of pride for Western New York.

“This was a regional priority for Western New York. We know that. It’s a point of pride for western New Yorkers. Every 30 years, a new stadium has to be built. It was 100% publicly financed when it was done the first time. What we worked on, in a very thoughtful approach, was to negotiate a deal to keep [the Bills] here for 30 more years — that was a commitment they were never willing to make,” she said.

"We had to keep the Buffalo Bills," Gov. Hochul says during an interview on @CapitalTonight. pic.twitter.com/7vUNXWDfXo

Critics of the stadium deal, including the Seneca Nation of Indians, have pointed to a possible conflict of interest, as Hochul’s husband, attorney Bill Hochul, is employed by Delaware North, the stadium’s concessionaire. When asked if she had any conversations with her husband about the stadium deal before going into negotiations, and if so, how they determined this negotiation would not be a conflict of interest, the governor said she and her husband have had to walk this line for years.

“My husband was a federal prosecutor for 30 years. We are accustomed to having a very solid wall between our work, especially when I was a member of Congress and he was a federal prosecutor for Barack Obama. I assure you that we are very accustomed to dealing with recusals and making sure that everyone knows we do not engage in each other’s business.”

She insisted that there is no “connection” between the negotiation and Delaware North and called the criticism “a distraction."

Other issues that were discussed during the interview include a newly constituted ethics board, issues she’ll be working on during the balance of session (Clean Slate Bill, mayoral control, affordable housing), the transition to a green economy, the future of Roe v. Wade, and whether New York City Mayor Eric Adams is “dissing” her by meeting with former Gov. Andrew Cuomo.

“I don’t even care. This is not important to me. I don’t give permission to make me feel dissed to anybody,” Hochul said.