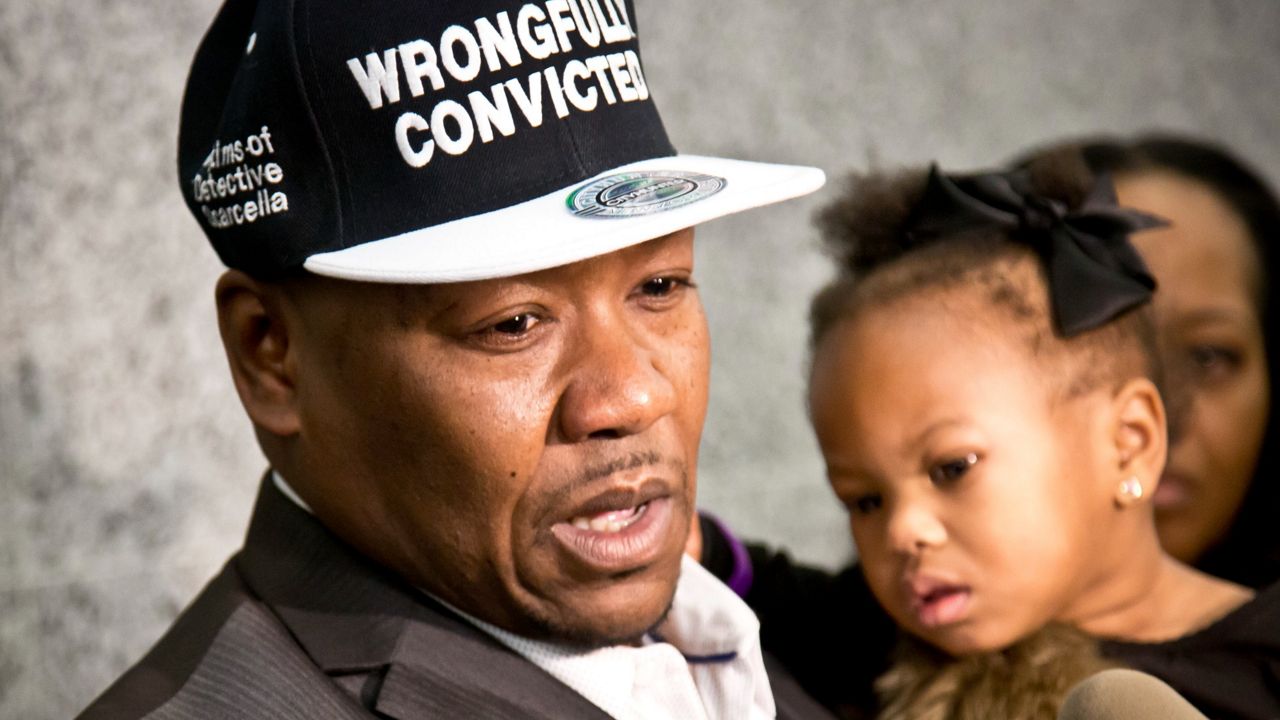 Derrick Hamilton holds his daughter Maya, 2, as he speaks during a news conference outside a courtroom after his exoneration Friday, Jan. 9, 2015, in New York. Hamilton's 1991 murder conviction was vacated after prosecutors told a New York City judge that the state's key witness had lied about who did it. (AP Photo)

In the 1990s, Derrick Hamilton of Brooklyn was sentenced to 25-years-to-life for a murder he didn’t commit. While in prison, he filed 10 post-conviction notices, which were all denied.

“Jail isn’t a pleasant place,” Hamilton said. “Often, the prosecutor comes with a sweetheart deal because they know they have no evidence. You don’t know what they [have]. They haven’t turned over discovery. And you say, ‘I can get out of jail and go home?’ And you take the deal.”

In 2019, after Hamilton was exonerated, the New York State Court of Appeals issued a decision in People v. Tiger which held that those who plead guilty to a crime can no longer chal­lenge their convic­tions unless they have DNA evid­ence to support their claim.

Hamilton, who is now a paralegal and the legal director of Family & Friends of the Wrongfully Convicted, is advocating for a new bill that would give people who have pleaded guilty another chance at justice.

The bill, introduced by New York state Sen. Zellnor Myrie and Assemblyman Dan Quart, is called the “Challenging Wrongful Convictions Act” (S266/A98). The argument underpinning the bill is that some people are forced “by poverty or coercion” into wrongly pleading guilty.

If it passes, the “Challenging Wrongful Convictions Act” would include $10 million to fund right to counsel for people seeking to overturn a conviction in court.

When asked if requests for discovery by people alleging their innocence would clog the legal system, Hamilton said it would pale in comparison to the money municipalities and the state pay out in wrongful convictions.

“What we are trying to do is prevent people from staying in prison for 20 years, or 30 years, and the city paying $1 million per year for each person (once they’re exonerated),” Hamilton said. “They’re going to save money.”