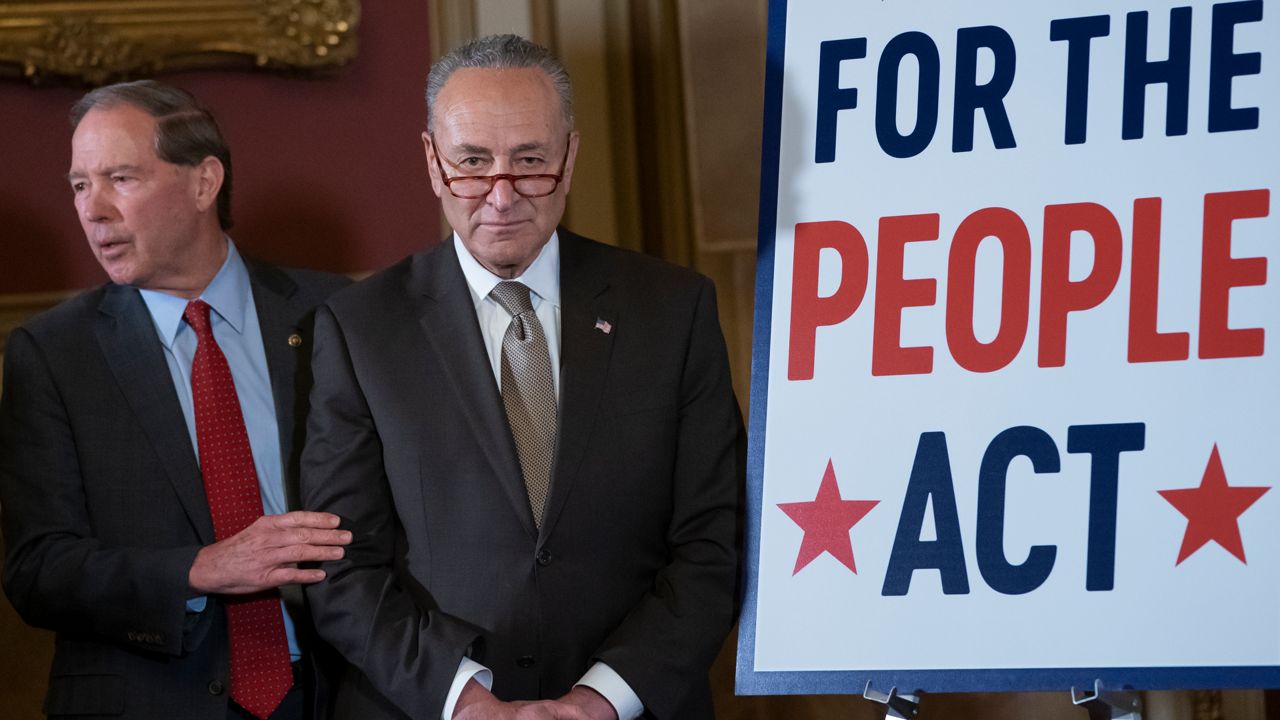 New York Citizen Action official to Schumer on the 'For the People Act': 'You have to bring this home, Chuck'

President Joe Biden on Tuesday called the sprawling “For the People Act” a national imperative.

The bill deals with five issues. According to Vox, they are:

Its bill numbers — HR.1 and S.1 — reflect how high these issues are on the Democratic Party’s priority list.

Republicans are almost universally against the measure. They said it’s both partisan and an attempt to impose national voting standards on states. Senate Republicans blocked the bill in June.

But Democrats are persisting for a number of reasons. First, the unsubstantiated allegations by many Trump Republicans that the presidential election was rigged has added a sense of urgency to the bill. Additionally, in response to that false narrative, efforts are underway in 17 Republican-controlled states to pass laws curtailing voter access.

In Georgia, for example, the state elections board, which is controlled by appointees of the Republican state Legislature, are now empowered to appoint a single person to take control of bipartisan county election boards, which have power over vote counting and voter eligibility.

Democrats are also bewildered by the Supreme Court’s decision in Brnovich v. Democratic National Committee, in which the nation’s highest court delivered, they say, yet another blow in the on-going battle against racially discriminatory voting laws.

This moment in history screams for passage of S.1, Rosemary Rivera, the co-executive director at Citizen Action of New York, told Capital Tonight.

“The urgency lies in the fact that, for the next decade, redistricting is happening across our country," Rivera said. "The current form of the bill helps to ensure there is not partisan redistricting that happens. We are pretty sure that districts across the country have already drawn lines and they are waiting for August 16, when the Census data actually hits the states.”

One big question is this: Does S.1 address what many Americans now fear after the 2020 presidential contest? The subversion of U.S. elections at the state level?

Rivera said it does.

However, last month, House and Senate Democrats introduced a more targeted bill to address attempted election subversion. “The Preventing Election Subversion Act” would make it a crime to harass or intimidate election workers, set mandatory distance minimums for poll watchers and ban the removal of local election supervisors by partisan bodies, such as state legislatures or election boards, without cause.

The “For the People Act” had also faced one more non-Republican hurdle. Elections administrators had reviewed the law, and gave it a thumbs down for demanding big and expensive changes, very fast, without a secure on-going funding stream.

“We do need to have stronger Board of Elections rules and regulations, and I think that we can do that,” she said.  “We need to actually invest in our democracy just as much as we are investing in other areas.”

But Dustin Czarny, a Democratic Onondaga County elections commissioner, sent Capital Tonight a statement saying he is for the bill.

“The deadlines are a challenge and that is why I make sure to argue for federal funding for technology and staffing to achieve the goals within it,” he wrote. “Some of the recent changes they made are better for election administrators then the original version. I also think the final bill that comes out of the Senate will have even more changes if they can get by the filibuster.”

Regardless of the bill’s problems, Citizen Action’s Rivera summed up its importance in Democratic circles by calling on Senate Majority Leader Charles Schumer to push hard for passage.

“You have to bring this home, Chuck,” Rivera said.  “It’s real test of his leadership at this point.”