President Donald Trump next week hopes to be the fourth president in a row re-elected to a second term. An exclusive Spectrum News/Ipsos poll asked residents of his former home state of New York how they feel about key issues Trump has impacted over the last year.

The president received low marks from New Yorkers for the recent New York Times reporting around his taxes: 47% have a less favorable view of him as a result.

The successful confirmation of Judge Amy Coney Barrett to the Supreme Court — Trump's third nomination to the court — also draws scattered applause in the state: 39% say they have a less favorable view; 27% say they hold a more favorable view. 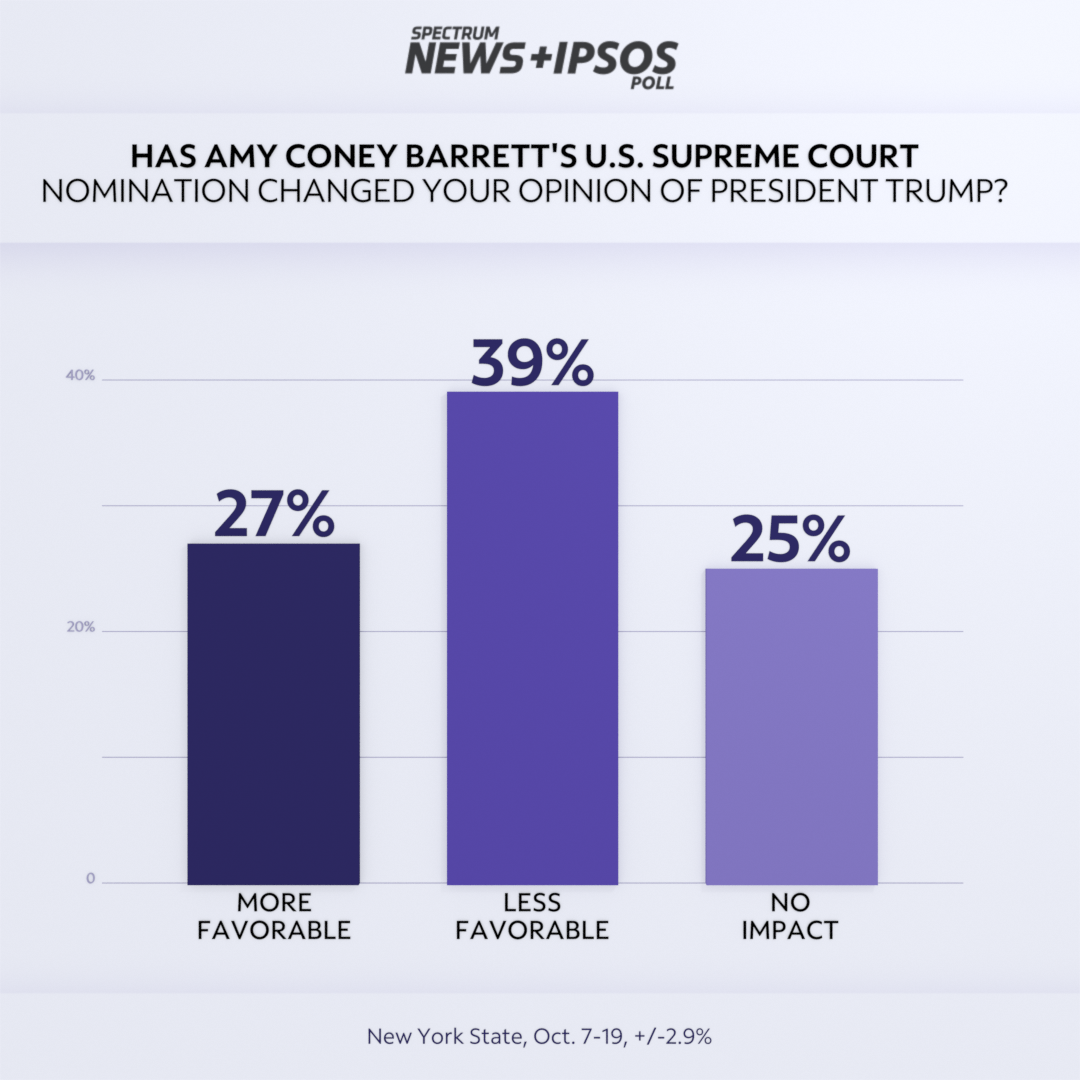 But the pandemic is seen by many New Yorkers as the key issue they face this year.

Trump on Tuesday urged New Yorkers in a tweet to vote for him. But many voters here are unlikely to do so. An exclusive Spectrum News/Ipsos poll found 47 percent of New Yorkers hold a less favorable view of the president as a result of the ongoing coronavirus pandemic, 29 percent more favorable and 18 percent say it has had no impact. At the second and final debate last week, Trump says he wants to avoid a broad shutdown of the U.S. economy.

"We have to open our country," Trump said. "I've said it often. The cure cannot be worse than the problem itself. He'll [Biden] close down the country if one person in our massive bureaucracy says we should close down." 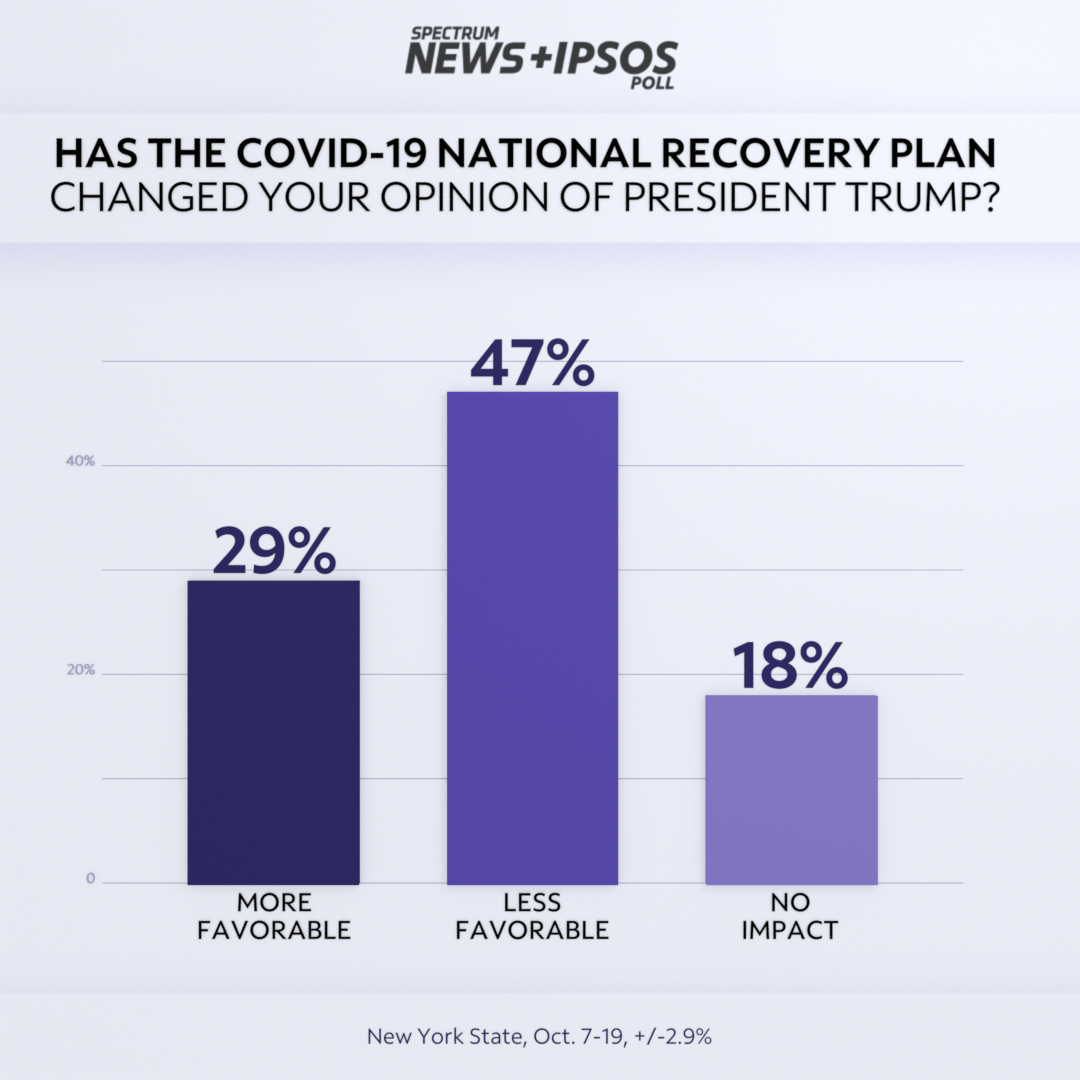 And Gov. Andrew Cuomo has knocked the president's handling of the virus. This week, Cuomo seized on comments by White House Chief of Staff Mark Meadows that the virus can't be controlled.

"If you believe you can't control then you don't even try and the federal government has never tried to control the virus," Cuomo said.

But the state has also relied heavily on the federal government for aid during the pandemic. This week, the Trump administration announced millions of rapid COVID tests will be sent to New York. State GOP Chairman Nick Langworthy says this reflects the care the president has taken for New York. 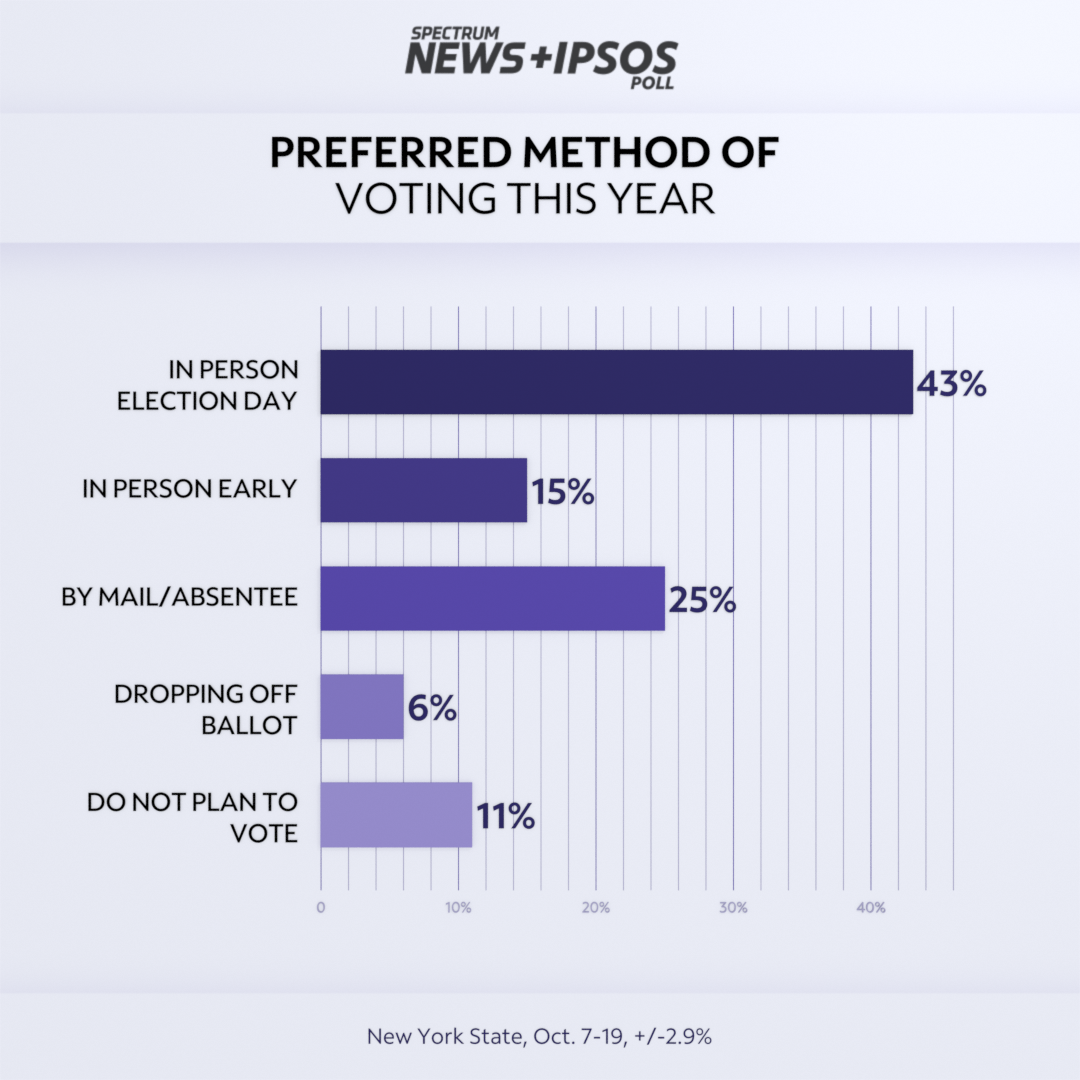 "In our darkest hours the president answered New York's call for assistance, whether it was bringing the USS Comfort into our harbor, building countless hospital beds at the Javits Center that the Army Corps of Engineers created, ventilators, PPE," Langworthy said.

Langworthy points out Cuomo had praised Trump's handling of the virus earlier in the pandemic.

"You name it and you can go back and check the tape because Andrew Cuomo thanked Mike Pence and President Donald Trump for their assistance in New York's darkest hours," he said.

The president is unlikely to win New York next week, but he could have an impact in key down-ballot races for Congress.