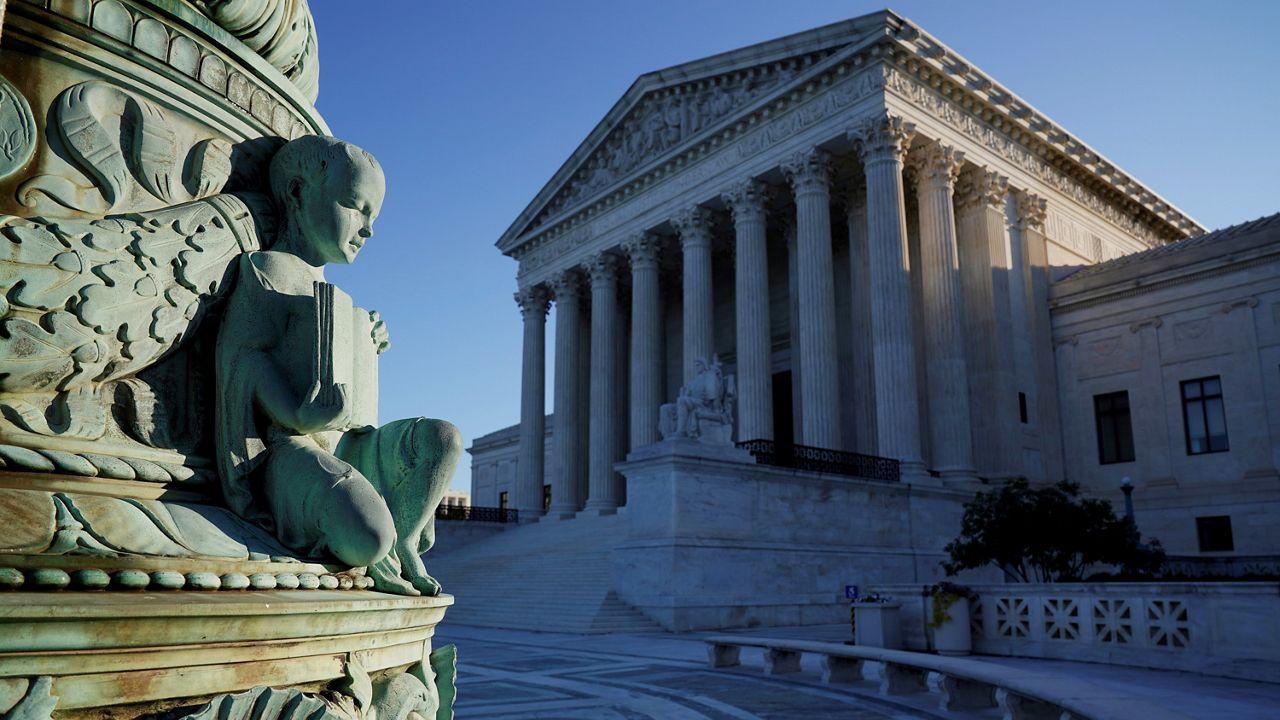 The U.S. Supreme Court will hear arguments in Moore v. Harper Wednesday. The case over redistricting could have far-reaching impacts on elections. (AP)

The United States Supreme Court will hear arguments Wednesday in the case of Moore v. Harper, the latest case over redistricting in North Carolina to make it to the highest court in the land.

The case has attracted national attention. Republican leaders in the North Carolina General Assembly argue the state courts should not be allowed to get involved in cases challenging election laws.

The case hinges on what’s called the “independent state legislature theory,” an idea that state legislatures are the only body allowed to set the rules for federal elections. This was seen as a fringe legal theory until recently, court watchers say.

It has Democrats warning that if North Carolina’s Republican leaders prevail, it could upend the way elections are run across the county.

“If the court endorses this doctrine, it would give state legislatures sole power over voting laws, congressional redistricting and potentially even the selection of presidential electors and the proper certification of election winners,” the governor states.

What’s the case about?

The case comes out of the monthslong political and legal fight over redistricting that started last year.

The GOP-led General Assembly redrew the state’s political maps after the 2020 census, but a court threw those maps out as unconstitutionally gerrymandered. That means the court decided the maps were drawn in a way to be favorable to Republicans over Democrats.

The case went all the way to the North Carolina Supreme Court, which required legislative leaders to redraw the maps again. When the court still wasn’t happy with the map for North Carolina's 14 congressional districts, a court-appointed team drew the maps for the 2022 elections.

The 2022 elections are done, but the lawsuit did not go away. Republican leaders in the legislature appealed the case to the United States Supreme Court.

What is the “independent state legislature theory”?

“The Supreme Court, in taking our case, signifies that they believe it is a significant issue. Of course, the lawsuit we filed simply makes the point that under the separation of powers, the state constitution gives the legislative branch the right and the responsibility when it comes to redistricting, and that it is not is not appropriate for the state judiciary to interfere in that,” state House Speaker Tim Moore said.

But taking the judicial balance of power out of election law is alarming for many, especially Democrats.

“This radical theory has no basis in history, no basis in legal precedent, and no basis in common sense; the fact that the Supreme Court is even considering it says far more about the extremism and diminishing credibility of the Court than it does about the merits of the theory,” said Asher Hildebrand, public policy professor at Duke University.

“If a majority of the court endorses the theory, the consequences for the future of American democracy cannot be overstated. In its broadest form, such a ruling would upend decades — and in some cases centuries — of settled laws, policies, and precedents governing the administration of our elections,” Hildebrand said.

What could this mean for elections in other states?

Hildebrand said this would open the door for state legislatures to make new election rules.

“State legislatures would have free rein to impose restrictive voting laws, accelerating the current wave of voter suppression in some states. Electoral reforms passed by voter initiatives, such as ranked-choice voting and non-partisan primaries, could be nullified,” he said.

“The day-to-day administration of elections would descend into chaos, as elections officials contend with divergent rules for state and federal elections, with each routine decision they make subject to litigation,” Hildebrand said.

The impact of a ruling would all depend on what the justices decide. They could reject the case outright, maintaining the right that state courts have to check legislatures on election rules and redistricting. But they could also find for North Carolina’s legislative leaders, then the question is how broad or narrow that ruling could be.

“Some proponents of the independent state legislature theory, including the North Carolina legislative leaders who petitioned the Supreme Court to hear the case, argue that such concerns are hyperbolic, suggesting the possibility of a narrower interpretation in which courts and election administrators must adhere to the ‘plain language’ of state constitutions and laws,” Hildebrand said.

“We should take no comfort in this possibility: Even a ‘narrower’ ruling could invite years of litigation and uncertainty, undermine public trust in our elections,” he said.

What are the arguments for the case?

The case rests on Article 1, Section 4 of the U.S. Constitution: “The Times, Places and Manner of holding Elections for Senators and Representatives, shall be prescribed in each State by the Legislature thereof; but the Congress may at any time by Law make or alter such Regulations, except as to the Places of chusing Senators.”

Dozens of groups and high-profile lawyers have filed “friend of the court” briefs with the Supreme Court in this case, generally on a partisan divide with Republicans arguing for and Democrats against.

“The Elections Clause is unmistakably clear,” the National Republican Redistricting Trust argues in a brief filed with the court. “The plain language of the Clause leaves no room for state and federal courts to alter election regulations set by those who wield the politically accountable levers of government.”

In their own brief, the Republican National Committee and the North Carolina Republican Party write: “Although the legal issues that Petitioners raise are rather straightforward, you would not know it from the overblown lamentations spewing from some corners of the legal and political communities.

“By redundantly bellowing the ‘independent state legislature’ mantra, many self-anointed constitutional law experts have convinced a healthy cross-section of armchair Court watchers that, should the Court decide this case the wrong way, it would signal the end of democracy,” the brief states.

What are the arguments against?

Paul Smith, with the Campaign Legal Center, summed up his opposition to the case in a statement recently.

“Checks and balances are a cornerstone of our democracy and prevent any one person, party or legislative body from abusing power. The extreme 'independent state legislature' theory would hand state legislators virtually unchecked power to gerrymander congressional districts and to change election rules to undermine the freedom to vote,” Smith said.

“State courts are one of the last avenues left for voters to challenge partisan gerrymandering, and we urge the Supreme Court to uphold our system of checks and balances by preserving the vital role state courts and state constitutions play in facilitating a transparent, inclusive and accountable democracy,” he said.

After Wednesday’s arguments, the case will be in the hands of the nine Supreme Court justices. Court watchers say four justices have indicated they thought favorably of the “independent state legislature theory,” but it will likely be months before we know how the full court decides the case.