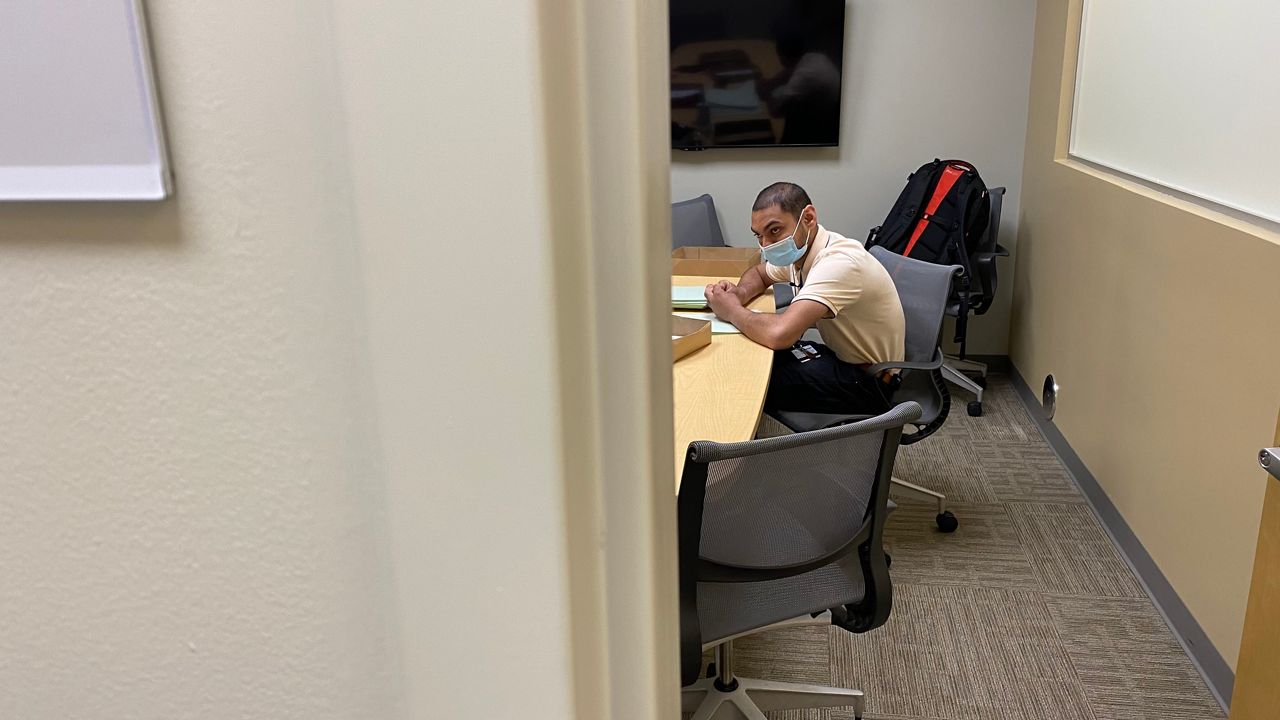 Duke research shows benefits of neurodiversity in the workforce

Data reported in the Harvard Business Review suggests inclusion of certain brain types and behavioral traits can make your workforce more productive. This push to help employers understand the advantages of hiring people who are on the autism spectrum or have ADHD draws upon the premise of neurodiversity.

Neurodiversity, a movement born out of autism awareness, is a viewpoint recognizing the wide mix of brains and behaviors as normal differences within a human population.

The topic is front and center at the Duke Center for Autism and Brain Development, where at least one employee’s attributes have shaped research on neurodiversity for the better.

Every Monday morning, Raghav Swaminathan shows up to the center ready to work.

The 27-year-old with autism spectrum disorder has worked at the center for the last few years.

“My favorite part about doing this is how I get to ... put things neatly in every folder,” Swaminathan said.

According to a 2021 peer-reviewed article published in the Frontiers in Psychology Journal, the neurodiversity movement began as a way to talk about the benefit, neglect and role of autistic people in American society. Since then, the focus has expanded to include people like Swaminathan on the job.

”I make sure I do the job well and correctly,” he said.

“I just love it, you know? Doing my job every morning — coming in and doing what I do,” he said.

#TheMoreYouKnow Have you heard the words neurotypical and neurodivergent? If your answer is no, you aren't alone! Autistic self-advocates came up with terms like this as part of a movement called neurodiversity. Raghav Swaminathan embodies neurodiversity on the job! @SpecNews1RDU pic.twitter.com/C3DlqyfWjT

One definition of neurodivergent is when a person is differing in mental or neurological function from what is considered typical or normal — not neurotypical. This means Swaminathan may act, talk and go about life in a different way from perceived cultural norms. Examples of neurodivergence are autism, ADHD, dyslexia, dyspraxia and Tourette’s syndrome.

“Neurodivergent people are routinely excluded from key conversations that impact their lives," one advocate from the Autistic Self Advocacy Network wrote.

Psychologists refer to seeing the variations in cognition and neurological makeup of people as a difference — not a deficit — as embracing neurodiversity.

Swaminathan said he has felt that embrace at work.

“I’ll never forget one day he came up to me and said, ‘You know, Dr. Dawson, I think you need a break. I think you need to take a vacation. You are too busy,’" Dawson said. "It just showed me the amazing amount of empathy that he has. That kind of empathy affects everything that we do here.”

Swaminathan is one of three hires who have ASD at the center.

“It's a great form of me to get to interact with people, get to know people well and get to work with them," he said.

For this self-described social butterfly, he is in the right spot.

“I’m a people person. They give me work to do and they are very dedicated to people with autism,” Swaminathan said.

One relatively new scientific idea is that communication must be a two-way street between neurotypicals and neurodivergents.

Anne Grego-Nagel, a Human Factors Engineer at Autism Speaks, who specializes in employment initiatives for neurodiverse individuals. She is on the spectrum as well.

"The biggest stumbling block I find when I am working with companies is the communication differences," Grego-Nagel said.

#TheMoreYouKnow One of the issues people between non-autistic and autistic people is communication. Anne Grego-Nagel is on the Spectrum. Grego-Nagel said she works with companies on seeing the importance of both groups needing to understand one another. @SpecNews1RDU pic.twitter.com/GNu5E3KhEd

This increased understanding by both sides is known as the ‘Double-Empathy Problem’.

Experts believe it forces non-autistic and autistic people to “respect neurodiversity by focusing on individuality across groups”.  Grego-Nagel said approaching from this frame of mind does away with the logic of seeing communication breakdowns as a result of an autistic person’s shortcomings.

“We have to work together on it,” she said.

#TheMoreYouKnow This is known as the Double-Empathy problem. Grego-Nagel breaks down the breakdown in communication and what happens when communication improves in the workplace. @autismspeaks @SpecNews1RDU pic.twitter.com/ZUPEOuiRAN

The advocate said self-advocacy is also a must for neurodivergents.

“To get the neurotypicals to try to understand us…I take it in small pieces. I take my wins where I can get them,” she said.

Grego-Nagel said be clear with your superiors and coworkers about what you need to succeed at work.

She said present it as a way to make the company more efficient by explaining what makes you thrive as an individual in the framework of a team.

“If you have a list of things you want me to do, don’t just rattle them off. Please can we write them down? Can you send me an email? When we have an assignment, can you give me dates on when it is due?” she said.

Grego-Nagel said to request a list of assignments and document it. Don’t be afraid to self-advocate and don’t be scared to ask questions.

“I can say that because I have had years of experience, and I have had a lot of really bad experiences,” Grego-Nagel said. “They are not going to intuitively understand what you need unless you tell them what you need, because they really have no clue how our brain is working.”