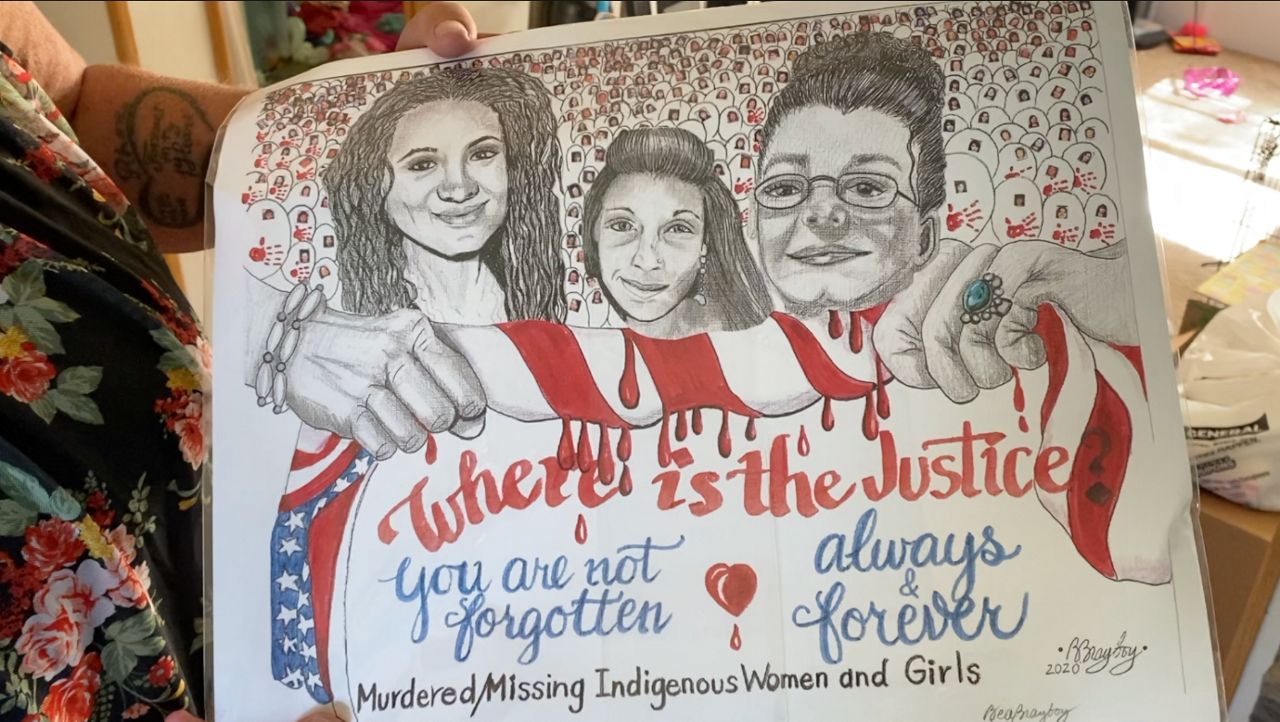 Drawing titled 'Where Is The Justice' of Christina Bennett, Rhonda Jones and Megan Oxendine drawn by Bea Brayboy.

ROBESON COUNTY, N.C. — Tattooed on the inside of Sheila Price’s middle finger is a permanant reminder of her late-daughter, Rhonda Jones.

Jones’ body was found in a trash can in Lumberton in April 2017. The discovery of her body and two other indigenous women, Christina Bennett and Megan Oxendine, weeks and blocks apart from each other garnered national headlines. Their cases remain unsolved.

Jones was 36. She left behind five children and a grandchild. Price has a hand-drawn portrait of the three women in her home, along with portraits of her daughter all along the walls.

“It makes me so mad, that I have to live every day of my life picturing someone throwing my youngin’ in a trash can. If people knew how much anger I have and hurt inside, that is why I do what I do,” Price said.

The tragic death of her daughter moved her to start investigating other homicides and missing people cases in Robeson County. Price keeps a victim notebook that has the names and faces of more than 200 people, either missing or murdered in the county.

“Every one of them is in alphabetical order, they have their name, their birth date, their death date, the ones we can get their information on, everyone has unsolved, pending, unfair or solved — there aren’t too many I have to write solved on,” Price said.

Price adds to the notebook daily, which has become a full-time job. Turning the page to her daughter’s picture is the shocking reality of why she spends countless hours advocating for these victims.

“It’s kinda hard to have to look at her in a victim’s notebook, I’ll tell you,” Price said.

Four years have come and gone but little has changed for Price, who continues to search for answers. She says there are few people in the book that she doesn’t know much about.

In 2019, Price started the Facebook group Shatter the Silence, a victim’s advocate page to raise awareness for missing and murdered people in Robeson County. Since it started, it has grown to a community of over 8,000 people.

Price says the group plans to meet and to march and hold events to raise awareness.

“My goal is to help families like mine keep fighting for justice,” Price said.

Price hopes the more they advocate, the stories and cases of those missing and unsolved can gain attention from outside of Robeson County.

“Until we get someone outside of Robeson County to come in and help with all these unsolved murders, some of us may never get justice,” Price said.

There is currently a $40,000 reward being offered to anyone with information relating to the deaths of Rhonda Jones, Megan Oxendine and Christina Bennett. If you have information, you can contact the FBI at 704-672-6100.