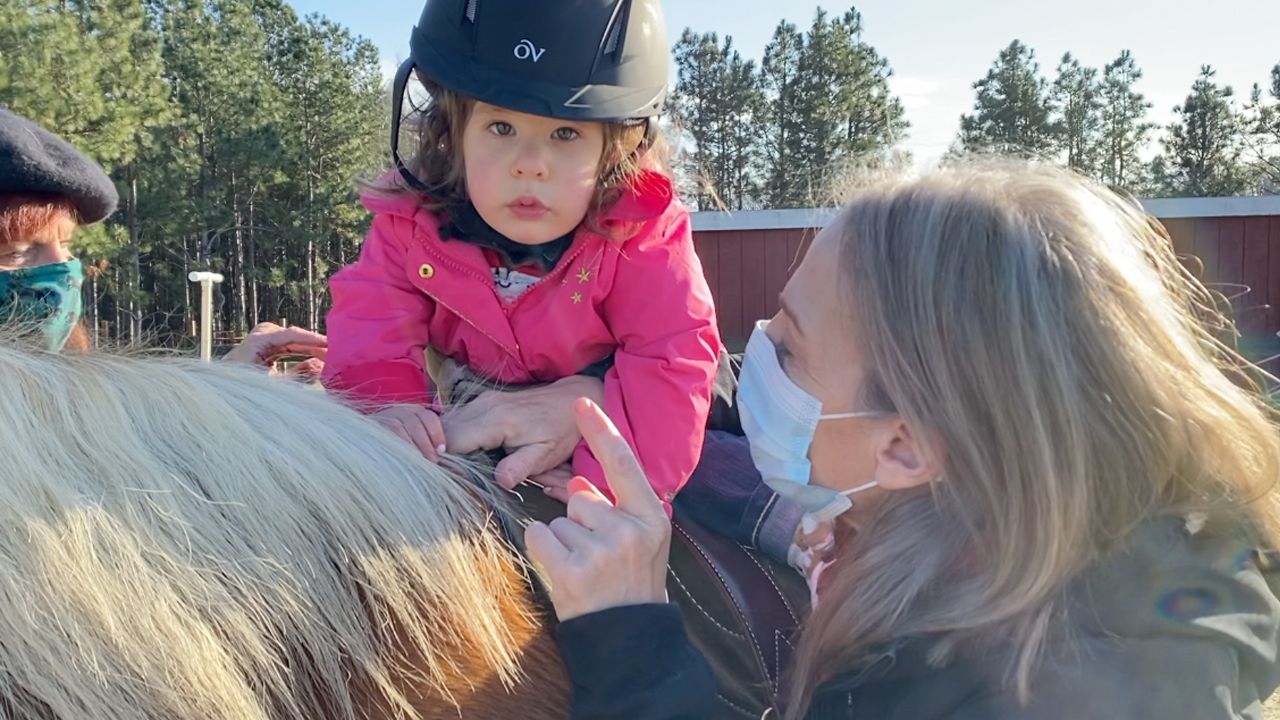 ZEBULON, N.C. — For Sophie Jane, it was love at first ride.

Her best friend is a horse named “Pony Boy,” and the 1-year-old visits him every week for equine-assisted occupational therapy.

“Her life is not defined by her syndrome, it’s defined by love. And we think that Jesus saved her from the very beginning," says Ashley Jones, Sophie's mother.

When Sophie was just one month old, she was diagnosed with a rare genetic disorder that affects one in every 15,000 births. It's called Prader-Willi syndrome, and so far, there's no cure.

“It affects the hypothalamus and that regulates body temperature, and it regulates also feeling full. And so, that’s the scariest part of Prader-Willi syndrome is that when she reaches a certain point, it’s kind of ironic, she goes from not really caring about food and needing help to one day feeling a permanent onset of hunger," Jones explains.

Most people measure life’s accomplishments in milestones. For Sophie’s mother, she calls them "inch-stones."

“For a typical baby, cruising is a milestone. For Sophie it was just, you know, pulling up to stand and conquering being able to do that with her right leg and her left leg," she says.

To build up her strength, Sophie’s mom has quite the to-do list, but if there’s one activity that never feels like a chore, it’s seeing her Pony Boy.

“In the beginning, we were really having to hold on to her constantly," says Nancy King, occupational therapist.

King specializes in helping kids like Sophie with special needs.

“The more she would be up there and his movement, it’s really exercising her core muscles and her trunk," she says.

King is a firm believer in the emotional and physical healing powers of horses. Pony Boy’s movements help Sophie with essential motor skills.

“We’re concerning ourselves with things like these daily living skills like dressing, bathing, sitting on the potty even. She has to be able to support herself up," King emphasizes.

She has two heart defects that effect a small percentage of kids with Prader-Willi.

“I've been dreading it since they told us at four months because I don’t want to lose my baby. And we trust the lord, his plan is good, but I just dread. She’s kind of been at my side since she’s been born," Jones says.

Although Jones knows the road ahead will be difficult, she’s grateful.

“She is a little miracle, and no matter what suffering we have gone through in the midst of all this, it is all worth it because of the joy and love that she’s taught us," she says.